This is a guest Post by Michael J. Mazzeo, Jonathan Hillel and Samantha Zyontz[1]

Our analysis of a new dataset challenges the assumptions on which the Patent Reform Act is based and questions the need for damages law reform. Damages provisions of the Patent Reform Act, the latest version of which was recently introduced for vote in the Senate, are premised on concerns that awards are “too often excessive”[2] and those large verdicts featured in media headlines “represent the tip of the iceberg” of excessive awards.[3] Last week at the inaugural Samsung-Stanford Patent Remedies Conference, we presented a very different picture of patent infringement damages.

In our prize-winning study, “Are Patent Infringement Awards Excessive?: The Data Behind The Patent Reform Debate”, we compile a dataset comprising infringement awards from over 300 cases decided in US federal courts between 1995 and 2008. We build on a proprietary dataset from PricewaterhouseCoopers, supplementing it with information about the litigants, lawsuits and economic value of the patents-at-issue. Using standard statistical techniques and regression analysis, we search for evidence of “excessive” awards. Certain of our key findings are summarized below:

1. The eight largest awards represent nearly half of the total amount of damages in our dataset. As shown below, the distribution of damages is highly skewed, and awards in the largest eight cases represent over 47% of cumulative damages. 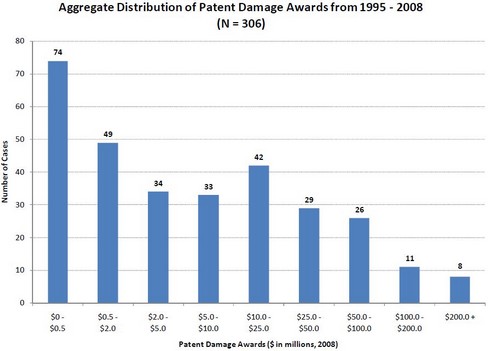 2. Patent infringement damages are highly predictable. We perform an 80-variable log-linear regression analysis that explains nearly 75% of the variation in the observed awards. As shown below, the first-order results of our regression indicate that juries and large defendants are correlated with higher awards. 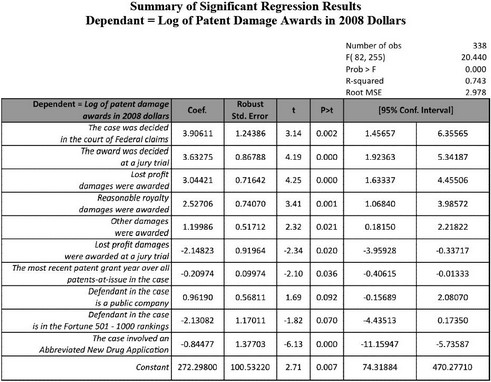 3. The largest awards are not outliers of our model. We calculate predicted values for each award in our dataset, based on the factors present in each case. The residuals graph below shows the difference in logs between the actual awarded amount and predicted value on the horizontal axis with the corresponding damages award level plotted along the vertical axis. The largest residuals do not represent the largest awards, which are situated above the $200 million line: 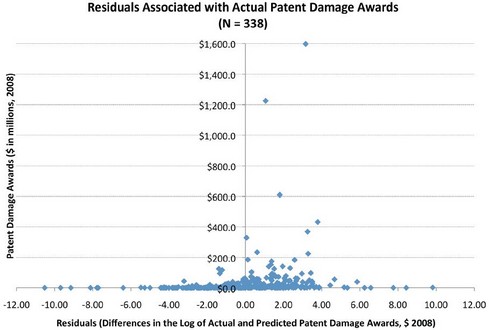 Taken together, our empirical analysis does not reveal evidence of a systematic or pervasive problem of “excessive” patent infringement awards. It is quite clear that a very small number of very large awards exist; however, these awards are very rare and serve to skew the distribution immensely. Furthermore, damages generally (including the largest awards) are highly predictable using our model.

As the Patent Reform Act restarts its route through Congress, legislators should refrain from passing reforms designed to address systematically “excessive” patent infringement awards. Nonetheless, as we continue to analyze our dataset, specific areas in need of targeted reforms may be revealed. A draft of our study report, including descriptions of our methodology, findings and questions for future research, is available on SSRN at: http://papers.ssrn.com/sol3/papers.cfm?abstract_id=1765891.
——————————————————————————–
[1] Michael J. Mazzeo is an Associate Professor in the Department of Management and Strategy, Kellogg School of Management, Northwestern University, and a Faculty Associate at Northwestern University's Institute for Policy Research; Jonathan Hillel is an Associate at Skadden, Arps, Slate, Meagher & Flom LLP; Samantha Zyontz is a Senior Research Associate at the Searle Civil Justice Institute, Law and Economics Center, George Mason University School of Law.
[2] Senate Report on the Patent Reform Act of 2009, S. Rep. 111-18, at 8 (May 12, 2009).
[3] Senate Report on the Patent Reform Act of 2007, S. Rep. 110-259, at 12 (January 24, 2008).

48 thoughts on “Patent Damages and the Need for Reform”