Crown Packaging presents the latest iteration of the court's thinking on this issue.  Penned by the highly regarded Judge Ronald M. Whyte of the Northern District of California, the opinion firmly lays to rest one possible argument for challenging mechanical patents on written description ground and confirms that the Problem-Solution approach to analyzing written description issues applied in Revolution Eyewear is alive and well post-Ariad.  Given the depth of its treatment of the issue, this is an opinion that should go into every attorney's toolbag for addressing non-biotech related written description issues.

The patents at issue in Crown disclose a beverage can end that reduces the amount of metal wasted during the process of seaming the can end to the can body.  (Picture a can of soda.  The can end is the top portion that one drinks from.  The can body is the part that contains the beverage.)  The patents (which share a specification) solve the problem of reducing metal waste in two ways: first, by changing the angle of the vertical portion of the inside wall from nearly perpendicular to significantly angled, and second, by reducing width of the reinforcing bead (the little channel that runs along the inside of the can lip that tends to fill up with soda).  Because simply reducing the width of the reinforcing bead can present structural challenges and result in unsightly scuffing, the patent also discloses a particular type of chuck (the portion of the seaming machinery that sits inside the top of the can against which the lip is rolled) that does not drive deeply into the reinforcing bead.

Figure 2 illustrates the prior art; Figure 5 is an embodiment of the invention.  In the prior art can end, the peripheral walls are nearly vertical and the chuck (element 17) fully enters the reinforcing bead (element 15); in the embodiment of the invention, the walls are closer to 45 degrees and the chuck (element 31) does not enter the reinforcing bead (element 25). 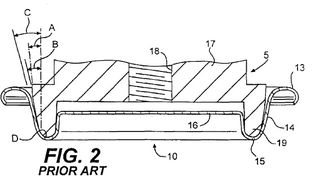 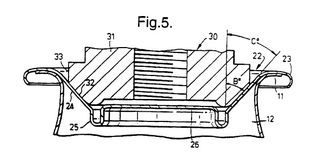 Crown's two patents, one for a product and the other a method of manufacturing, include claims covering just the use of an angled wall without mentioning the narrow bead or penetration of the chuck. During the district court proceedings, Ball argued that these claims lacked written description support because they covered embodiments both in which the chuck was driven inside the reinforcing channel as well as embodiments in which the chuck was driven outside the bead despite only describing embodiments showing the latter in the specification.  The district court agreed with Bell, granting summary judgment of invalidity.

Judge Whyte and Judge Newman disagreed with the district court.  After dismissing the species-genus approach to these types of situations, the majority framed the issue in problem-solution terms.  Relying on Revolution Eyeware, Inc. v. Aspex Eyewear, Inc., 563 F.3d 1358 (Fed. Cir. 2009), the court agreed with Crown that "[i]nventors can frame their claims to address one problem or several, and the written description requirement will be satisfied as to each claim as long as the description conveys that the inventor was in possession of the invention recited in the claim." Slip Op. at 13, quoting Revolution Eyewear at 1367.  Here, there were two separate, clearly described solutions to the problem of improving metal useage: modifying the slope of the wall or limiting the width of the reinforcing bead.  Nor does it matter that both solutions relate to the same problem: "we specifically held in Revolution Eyewear that it is a 'false premise that if the problems addressed by the invention are related, then a claim addressing only one of the problems is invalid for lack of sufficient written description."  Slip. Op. at 14, quoting Revolution Eyewear at 1367. And the majority distinguished the issue of enablement from that of written description, concluding that Ball's argument relating to whether one of ordinary skill in the art could not seam a can with an increased sloped chuck wall without also avoiding contact with the reinforcing bead presented an issue of enablement, not written description.

One possible limitation on the majority's holding, however, is where the specification mandates that the prior art problems must always be solved together.  Here, the specification did not so require – rather, "the specification supports the asserted claims that achieve metal savings by varying the slope of the chuck wall alone."  Slip Op. at 15.  Yet this will likely be an argument raised by future parties.

The Dissent
Although agreeing with the majority on the reversal of the district court's grant of summary judgment of anticipation, Judge Dyk disagreed with its treatment of the written description issue.  Judge Dyk's dissent rested on a different reading of Revolution:

Relying on Revolution Eyewear, the majority holds that the claims are valid. However, Revolution Eyewear, in holding that a claim may address only one of the purposes disclosed in the specification, still requires explicit disclosure of the embodiments in the claims: “Inventors can frame their claims to address one problem or several, and the written description requirement will be satisfied as to each claim as long as the description conveys that the inventor was in possession of the invention recited in that claim.” Revolution Eyewear, Inc. v. Aspex Eyewear, Inc., 563 F.3d 1358, 1367 (Fed. Cir. 2009) (emphasis added). Therefore, the claims, whether directed to solving a single problem or multiple problems, must still be grounded in the specification.

Commentary:
I find it difficult to agree with Judge Dyk's distinguishing of Revolution Eyewear, which was decided on strikingly similar facts, or his deeper view of what constitutes an invention.  In Revolution, the patent addressed two problems presented by prior-art magnetic sunglasses that attached to the frame of a pair of glasses: a frame strength problem, which the inventor solved by placing the magnets on protrusions extending from the primary and auxiliary frames, and a stability problem, which the inventor solved by having the protrusions extending from the auxiliary frame rest on top of protrusions extending from the primary frame.  The asserted claim covered only the former: placing the magnets on protrusions, and did not include any limitations directed to the stability problem.

In rejecting the written description defense, the Revolution court pointed specifically to Figure 3 of the original patent, reproduced below: 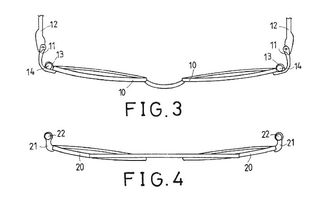 This figure discloses only the combination embodiment: a primary frame with magnet-containing protrusions designed so that the auxiliary frame protrusions will rest on top (element 13/14 on the primary, 21/22 on the auxiliary).  The court's opinion did not rely on any embodiments showing only magnet-containing projections without the stability component.  Yet, under Judge Dyk's reasoning, such an embodiment could not provide the necessary written description support.

Moving into the abstract, Judge Dyk's view of the nature of an invention also seems problematic to me.  Judge Dyk seems to be expressing the Louriean idea that "the invention" must be limited to the identical embodiments disclosed in the patent.  Any alteration of those embodiments, such as combining one particular inventive idea disclosed in the patent with the prior art, renders the claim invalid.  But this bright line rule ignores one of the underlying tensions in patent law, namely, that it is impossible to describe every single possible permutation of the invention.  Patents don't need to specify, for example, that a particular device may be painted every color of the rainbow to provide written description support for a claim that contains no limitations as to color.  Yet this seems to be the logical extension of the embodiment-only approach, and one that continues to be trouble me.