Due to resource constraints, the PTO is limiting the track one initiative to 10,000 applications for the May-Sept 2011 period (the remainder of FY 2011).

The $4,000 fee was set after the USPTO estimated the average cost to the Office of performing the service. Of course, we live in a market economy where higher prices tend to lower demand. In thinking about the potential demand for expedited examination, I surveyed Patently-O readers who handled some aspects of patent prosecution and filing decisions and asked them what percent of their applications they would expedite based upon a $4,000 fee. (That time, I used software to largely eliminate the potential for multiple-voting.) The following histogram shows that the bulk of responses would expedite fewer than 5% of their cases. More than half indicated they would expedite less than 2% of their cases. 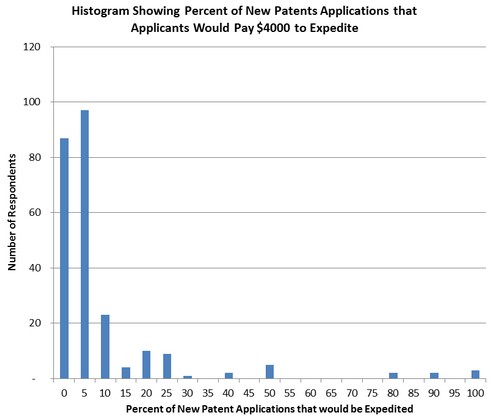 The EPC offers the PACE program that allows applicants a cost-free acceleration of processing. In that system, fewer than 5% of applicants request accelerated examination. As one response indicated, many applicants are “generally happy to wait for a patent to issue. ‘Patent Pending’ status is good for marketing, implies new product development. The market we are in is not one where patent speed is important.”