In an important nonobviousness decision the Federal Circuit has sided with the patent applicant, Arnold Klein and rejected the USPTO’s obviousness conclusions.  In its opinion, the court held that none of the five cited prior art references could be considered “analogous art.”  Under the Federal Circuit’s exclusionary test, as non-analogous art the references were then entirely excluded from consideration in the nonobviousness analysis.

A prior references is considered analogous if it is either (1) in the same field of endeavor as the invention or (2) “reasonably pertinent” to the problem with which the inventor is involved.  In turn, a reference is reasonably pertinent if it logically would have commended itself to an inventor’s attention in considering his problem.

Simple Invention; Powerful Opinion: The power of the opinion is amplified by the fact that Klein’s invention is an extremely simple mechanical device.

Klein’s patent application is directed toward a device for measuring and mixing sugar and water for bird feeders.  Ornithologists have discovered that different species of birds prefer different sugar-water ratios. One embodiment of Klein’s device looks like a measuring cup with a movable divider that separates the space into an area for sugar and another area for water.  The placement of the divider is set according to the bird species being fed. With the divider in place, sugar and water can then be added to their respective areas.  The proper ratio is guaranteed so long as water and sugar are added to the same level or “line of sight.”

The figures below show the invention fairly well. The basic embodiment has three slots for Hummingbirds, Orioles, and Butterflies. (Hummingbirds prefer more sugar).  The divider can be inserted and held in place by the chosen slot. Sugar & water would then be added to same level or line of sight.  Once the ingredients are added, the divider can be removed and the solution mixed together. 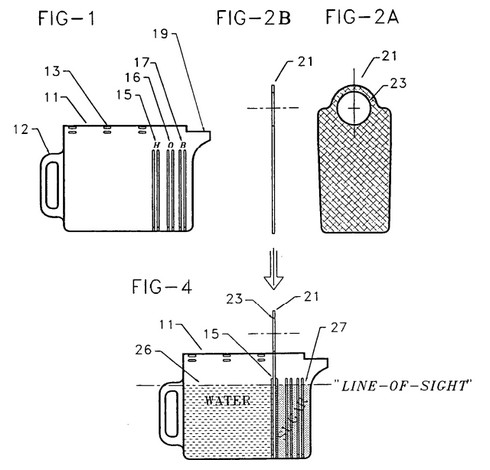 Of importance to this case, Klein’s broadest independent claim is fairly narrow in terms of both the claim elements and in reciting a purpose of the invention.

21.    A convenience nectar mixing device for use in preparation of sugar-water nectar for feeding hummingbirds, orioles or butterflies, said device comprising:

a container that is adapted to receive water,

a divider movably held by said receiving means for forming a compartment within said container, wherein said compartment has a volume that is proportionately less than a volume of said container, by a ratio established for the formulation of sugar-water nectar for hummingbirds, orioles or butterflies, wherein said compartment is adapted to receive sugar, and wherein removal of said divider from said receiving means allows mixing of said sugar and water to occur to provide said sugar-water nectar.

Rejecting the Five Rejections: In the application, Klein admitted that the ratios for the various species were known in the prior art. Based on that admission, the USPTO issued five separate obviousness rejections of Claim 21 — each using a different prior art reference in combination with the admitted ratios.

Three of the references were directed toward containers with movable dividers used to separate solid items such as screws or bolts. (See figure).  In determining that those references were non-analogous, the court first considered the problem being solved by Klein and arrived upon a somewhat narrowly defined single problem of: “making a nectar feeder with a movable divider to prepare different ratios of sugar and water for different animals.”  The court then quickly concluded that the three solid item separators were not pertinent to Klein’s problem “since none of these three references shows a partitioned container that is adapted to receive water or contain it long enough to be able to prepare different
ratios in the different compartments.”

The two remaining references were directed at dividing liquids that would be later mixed.  The court found neither of these pertinent to Klein’s invention because they did not address the multiple ratio problem and did not have movable dividers.

Because none of the references were pertinent the obviousness conclusion had no basis.

(As a note, the Federal Circuit did not address whether any of the references were in the same field of endeavor because the USPTO had based its rejection only on the reasonably pertinent test for analogous art.)

Singular Narrow Purpose of the Invention: One explanation for Klein’s success on appeal is the singular narrow purpose of his invention.  The narrow purpose then allowed him to argue that the cited references were well outside of that purpose.  On appeal, the USPTO Solicitor had argued that the problem being solved was really a broader “compartment separation problem.”  However, the Federal Circuit rejected that argument as untimely because it had not been raised before the Board of Patent Appeals, citing Sec. & Exch. Comm’n v. Chenery Corp., 318 U.S. 80, 94 (1943) (“[A]n administrative order cannot be upheld unless the grounds upon which the agency acted in exercising its powers were those upon which its action can be sustained.”). Going forward, a savvy Board of Patent Appeals may alter its approach and more broadly define the problem being solved.

Prior Art Addressing only Portions of Purpose: The most important aspect of the decision is likely the implicit holding that a prior art reference in a separate field of endeavor will not be analogous unless it is pertinent to the entire problem being solved.  Here, all of the references were pertinent to some aspect of the stated problem, but they failed the test because none was related to the problem as a whole.

The New Structure for Non-Obviousness Determinations: A criticism of KSR has been that it removed almost all structural methodology from the nonobviousness analysis and left the test too loose and open to subjectivity in decision making.  If it sticks, the Klein approach to the consideration analogous art has the potential reinvigorate a more rule-based analysis.

117 thoughts on “In re Klein: Analogous Art Test as the New Structure for Non-Obviousness Determinations”