The DOJ and PTO have given their solid support to Microsoft’s petition for certiorari in its battle over transnational patent infringement. This support makes grant of the petition highly likely.

This case, like Eolas and Pellegrini before, questions the scope of Section 271(f) of the Patent Act.  That statute allows a U.S. patentee to collect damages for foreign sales of a patented invention based on the export of one or more of its components from the U.S.  Recently, the CAFC has expanded the common interpretation of the statute to include the export of software code (AT&T, Eolas) as well as to the export of elements used in a patented method (Union Carbide).  In a case that is difficult to square with AT&T or Eolas, the court held that the “component” does not apply to plans or instructions.

In this case, Microsoft’s software code was generated in the U.S. and then shipped abroad where copies were then generated and distributed.  AT&T claims (and courts have thus far agreed) that sales of those foreign copies infringe the U.S. patent and create liability.  The chart below gives my loose graphical interpretation of the events. 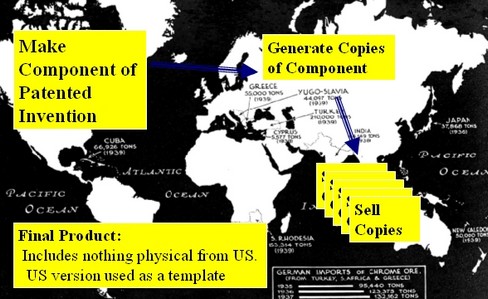 If it stands, this case could have far-reaching effects in the fields of biotechnology (DNA/cell replication) as well as foreign piracy (shipping product from the U.S. to reverse engineer and copy in a foreign country).

In their brief supporting the petition, Daryl Joseffer and the DOJ crew agree that software can be a component of a patented invention.  They argue, however, that the foreign replicas do not create liability under the act because the replicas themselves were not supplied from the United States (as is required by the statute). According to the brief, the lower court’s interpretation “improperly extends United States patent law to foreign markets and puts United States software companies at a competitive disadvantage vis-a-vis their foreign competitors in foreign markets.”

The Government argues that the extraterritorial nature of U.S. patents should be narrowly construed and that if someone wants rights to stop foreign infringement, then they should get foreign patents.