The USPTO issued more utility patents in calendar year 2010 than in any year in history. The 2010 total – just shy of 220,000 issued patents – is a 31% increase over 2009. The previous record was set in 2006 with about 173,000 issued utility patents.  The dramatic rise in issuance rate is not tied directly to an increase in filings (although there has been a small increase in new application filings).  Rather, the increase appears to be the result of administrative changes instituted by USPTO Director David Kappos who took office mid-year 2009 after being nominated by President Barack Obama. 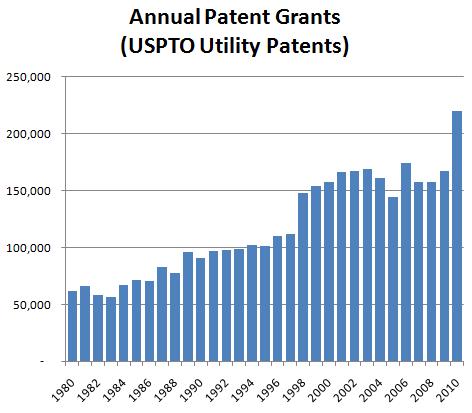 The high disposal rate appears likely to continue and perhaps increase in velocity. During the last three weeks (Dec 25, 2010 – Jan 14, 2011), the USPTO has issued more patents than in any three-week period on record.

The increased number of issuances raises some concern that the PTO has lowered its standard for patentability.  It is true, that a higher percentage of applications are resulting in issued patents. However, the PTO is also rejecting more applications than ever before. It is probably time for a quality study comparing patents issued late-2008 to those issued in late-2010.