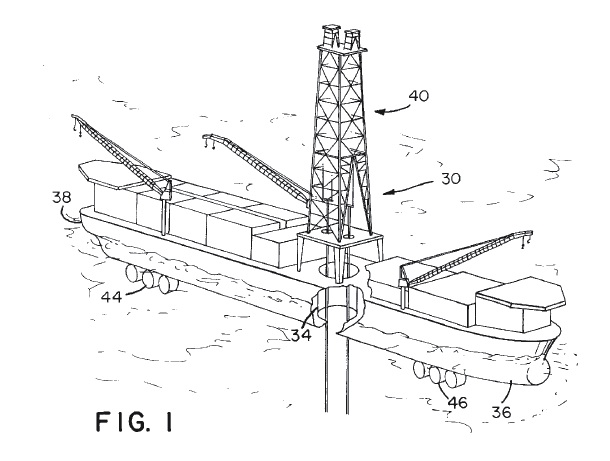 Transocean brought suit against Maersk for infringement of three patents relating to an improved apparatus for offshore drilling.  Offshore drilling involves lowering a variety of equipment, including the drill bit, a series of long pipes, and a blow-out-preventor, to the ocean floor in order to drill and stabilize a borehole that reaches a subterranean oil reservoir.  These components are moved by a derrick (the tower on the picture to the right), which is equipped with a station that raises and lowers them to the ocean floor.  To begin the drilling process, the rig lowers the drill bit to the ocean floor, adding sections of pipe until the bit reaches the floor.  Periodically as the drill descends into the seabed, it must be brought back up to the surface so that casings can be inserted into the borehole.  Conventional rigs utilized a derrick with only a single station for performing these steps, thus requiring that they be performed sequentially – a time consuming process.

The patents-in-suit describe a derrick that includes two stations – a main advancing station and an auxiliary advancing station – that can each assemble the strings of drilling materials and lower them to the ocean floor.  According to the patent, this "dual-activity" rig can significantly decrease the time required to complete a borehole.  The accused infringer, Maersk, contracted with a U.S. company to build a rig with two stations for use in the Gulf of Mexico.  However, prior to delivery of the rig, Maersk implemented a modification that, it argued, precluded Transocean from claiming infringement.  It also argued that the claims were invalid.

The district court granted summary judgment in favor of Maersk, holding that the asserted claims were obvious and not enabled.  The court further ruled that Maersk's activities did not constitute either an offer for sale or a sale within the United States.  Transocean appealed these rulings, along with the district court's grant of summary judgment of collateral estoppel and no willful infringement.

Obviousness
The Federal Circuit's obviousness ruling is notable because, although it found that the references cited by Maersk created a prima facie case of obviousness, it concluded that the district court had erred by ignoring Transocean's significant objective evidence of nonobviousness.  This included evidence of industry skepticism about a dual drill string approach, industry praise for its dual activity rig, copying, and commercial success, in that its dual activity rigs commanded a higher licensing premium then standard rigs.  Although Maersk presented counter evidence, the Federal Circuit concluded that it was improper to resolve these disputes on summary judgment.

Enablement
The Federal Circuit also reversed the grant of summary judgment of lack of enablement, finding that factual issues precluded such a ruling.  In particular, it noted that while the patent must enable one of ordinary skill in the art to practice the claimed invention without undue experimentation, it does not need to enable the most optimized configuration (unless it is an explicit part of the claims).

Infringement
The district court's noninfringement ruling did not rest on a comparison of the accused device to the claim, but rather on a conclusion that there was no offer for sale or sale within the United States.  Although the contract at issue was between two U.S. companies, and specified an "Operating Area" for the rig that was in U.S. territorial waters, it was negotiated and signed outside of the United States.

The Federal Circuit disagreed that these activities fell outside the scope of 35 U.S.C. 271(a).  With respect to the "offer for sale" provision, after reviewing the legislative history of this language, analyzing its literal text, and considering the policy implications, the court concluded that it covered a contract between two U.S. companies for performance in the U.S., regardless of whether it was negotiated or signed within the U.S.  Likewise, the court concluded that, because the contract was for the sale of a patented invention with delivery and performance in the U.S., it constituted a sale for purposes of 271(a) as  a matter of law.

Note: Although the court used the term "patented invention," it was careful to note that there remained a dispute over whether the rig described in the contract actually infringed the patents-in-suit.

The Federal Circuit did, however, affirm the district court's ruling that Transocean was collaterally estopped from arguing that the rig Maersk ultimately delivered infringed the patents.  In another litigation, Transocean had obtained by an injunction requiring the defendant GlobalStantaFe Corp. ("GSF") to make a particular modification to its rig in order to avoid infringing the patents-in-suit.  Prior to delivering the rig to the United States, Maersk had learned about this injunction and made the relevant modification.  The Federal Circuit concluded that the ruling in the GSF litigation estopped Transocean from arguing that rigs with the modification infringed its patents.

The panel also affirmed the district court's ruling of no willful infringement, concluding that Maersk's activities were insufficient to create an objectively high risk of infringement.