Guest Post by Paul Cole of the UK firm of Lucas & Co.

According to BBC News last Friday, Apple has succeeded in the German courts in enforcing a patent for a user interface feature for its mobile devices. The ruling demonstrates the value of European patents for "software" inventions where a "technical" effect can be demonstrated. The claims in the granted patents and the problems that they solve provide insight about what features of a user interface might be regarded as "technical" by the EPO. The advantages to a software developer of being able to patent innovative interface features that are important to the "look and feel" of the device and the software running on it are self-evident.

The affirmed patent is EP-B-1964022 which relates to the "slide to unlock" feature found in iPhones. The claim as granted is set out below: 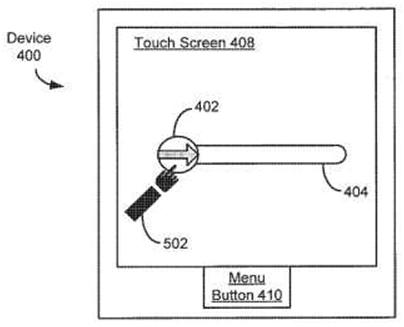 A copy of the decision is not yet available online, but study of the online file of the European patent application (which was not opposed after grant) is instructive. The Examining Division accepted that the provision of a device control method with visual feedback was a technical problem but objected that the claimed subject matter was obvious because dragging and dropping were known. In their reply, Apple argued that the objective technical problem was to provide a more efficient user-friendly procedure for unlocking a portable device and to provide a sensory feedback to the user regarding progress towards satisfaction of a user input condition that was required for unlocking to occur. As set out in the claim, the unlock image signalled to the user that the device was locked and simultaneously indicated a contact point that a user had to touch in order to unlock the device. The displayed path indicated to the user where and how the unlock image had to be moved and the current position of the image indicated progress already made towards the unlocked condition. The method was easier than in the prior art where a sequence of operations had to be memorised.

The second patent, EP-B-2059868 which relates to the handling of digital images, has not yet been ruled on by the German courts However, the granted claim and the reasons for grant are also of interest since any iPhone user will be familiar with the "Camera-Roll" feature in question.The main claim is set out below.

It appears from the file of the granted patent (which again was not opposed) that the technical effect of allowing a user to navigate within an image and to switch between images with a minimum of user input types was sufficient to support patentability.

The EPO acted as International Searching Authority, International Preliminary Examination was not necessary since the written opinion accompanying the search was favourable to patentability, and no objections were raised on entry into the European regional phase. The advantages to US applicants of using the EPO as ISA and possibly subsequently IPEA if allowable subject matter is likely to be identified are also self-evident.

It is instructive to compare these two granted European patents with another "look and feel" application which was refused by the EPO (EP1249014, Appeal Board decision T 0050/07; US 6396520). Interestingly this is the only Apple patent or application which appears to have been the subject of proceedings before an EPO Appeal Board. The invention concerned transition of a window between a maximised state and an icon state on the taskbar. 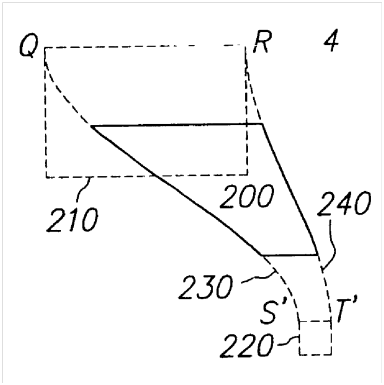 The main claim before the EPO Appeal Board read:

A method of transitioning a window on a computer screen between an open state and a minimized state, comprising the steps of:
-obtaining location information associated with a first window position in the open state;
-obtaining location information associated with a second window position in the minimized state;
-defining a set of curves, wherein said curves connect two selected points that relate to a dimension of said window in its first position to corresponding points of said window in its second position; and
-displaying said window at successive positions within said curves from said first position to said second position while scaling said dimension of the window to fit within said curves in a manner so as to give the appearance of sliding.

The issues before the Appeal Board provide an object lesson in how the state of the art at the application date, the exclusions as to patentable subject matter under a.52 EPC and the limitations of the disclosure of the application itself can exert a collective "squeeze" such that the result is refusal.

The closest prior art was US 6002402 (Schacher, Symantec) which showed a window transitioning between a maximised and an icon state, and novelty was to be found in the set of curves through which the transition took place producing a "funnel-like" effect and the display of the window at successive positions while it was being scaled down.

Arguments based on improved functionality received short shrift, the Appeal Board observing:

The differences between the invention and the prior art were therefore held to reside in the production of an aesthetic effect. Since that effect had no technical character, it could not in itself contribute to inventive step. However, it could be taken into account in formulating the objective technical problem over Schacher which was how to achieve the specified "funnel-like" effect. The information in the specification in this regard was limited, as indicated by the flowchart below: 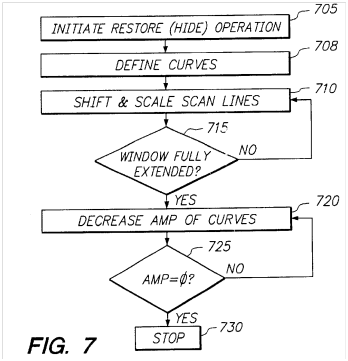 The description did not show that there was any difficulty in the shifting and scaling operations, and on the contrary the description explained that a variety of techniques for doing this would be apparent to those of ordinary skill in the art. Unsurprisingly, therefore, the Appeal Board held that the achievement of the indicated technical effect was held to be straightforward for a designer of graphical user interfaces.

If Apple had drilled further down into the transition method than they did, was there anything else that could have saved the application? The look and feel of a window as it transitions to and from the taskbar is a striking effect which it is submitted impresses most users each time they see it happen. The specification explains that the display is updated line-by-line during the transition and the image is recalculated for each line, but that was evidently not enough for allowance and in any event would be easy to avoid. However, in addition to software the invention is in the field of moving images where visibility and human persistence of vision are important. Was there an optimum time, or a range of optimum times within which the transition could take place without interfering with the operation of the computer and which would display the most clearly visible and most aesthetically satisfying sequence of images to the user? It is possible that the range of times for which the "micro-movie" that users see at each window transition lasts would not have been held to be obvious and instead would have been held to require thought both from the operating system point of view and from the standpoint of user trials. A limitation along these lines could have been something that the Appeal Board might have found less easy to treat dismissively.

One take-away message for US applicants is the need to draft applications bearing in mind the exclusions under the EPC: stating as one of the main objects of the inventions "to provide more aesthetically pleasing operations" plays straight into the hands of an Examining Division or Appeal Board within the EPO and even if such objects can and should be stated, functional objects are best set out first. Another message is not to overlook the role of the human user in the invention: in the refused application the needs of the computer and the attractiveness of the micro-movie as a matter of shape were explained but what was necessary for the user to see the "micro-movie" and how long it should last were left unstated.