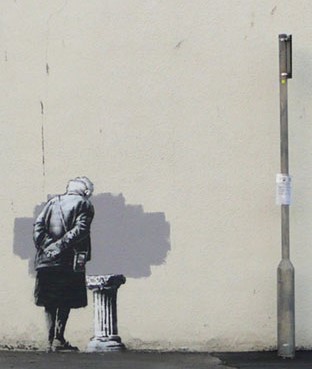 Banksy is a pseudonymous British street artist known for satirical and subversive graffiti. In 2014 one of his paintings appeared on the back wall of a game arcade in Folkestone(See image).  The building was owned by Stonefield Estates Ltd but the entire building is subject to a 20-year lease to Dreamland Leisure.  Seeking to capitalize on the work, Dreamland had the section of wall removed and put up for sale. (The Wall Now) Dreamland justified this move based upon the lease, which included a provision that would arguably require the tenant to remove or paint-over the artwork.

The Landlord (Lessor) transferred its rights to the work in quitclaim form to the Creative Foundation – a registered charity seeking to promote the art scene in Folkestone – who then sued Dreamland for possession.

Question: Who owns the artwork?

Holding: The Court (Justice Arnold) held that, although the tenant was justified in removing the graffiti, the landlord still owns the removed wall and image.

This decision makes sense in general, although I don’t  understand why rights of possession should immediately go back to the Lessor – rather, the lease should seemingly provide possessory rights to the chattel for the next 20 years. (Of course, I have no precedent to cite for this conclusion. DC).

This case makes me think a little about Moore v. Univ. of California where a patient (Moore) sued his doctor who had properly removed Moore’s cancerous spleen but then then made $$$ from the cell line.  There, the court came to the opposite conclusion – that Moore had no right to his excised spleen.

But the Copyright: In dicta, the court also wrote that copyright to the work continues to belong to Banksy, which is somewhat interesting to me as well. Banksy owns the copyright even though his/her process of creating the work required commission of a crime and destruction of property.

14 thoughts on “Property Law: Who owns the Graffiti?”