By: Colleen V. Chien, Professor of Law; Nicholas Halkowski, first-year associate at Wilson Sonsini and 2020 JD grad; Maria He, Masters Graduate of the Masters in Business Analytics Program at Leavey Business School, and Rodney Swartz, PhD, patent agent, Intellectual Property Associate at SRI International, and third-year JD student; all at Santa Clara University and writing in their personal capacity. This post is the third in a series about insights developed based on data released by the USPTO.

Almost two years have passed since the USPTO issued its January 2019 Patent Eligibility Guidance (PEG). As the prospect of near-term Supreme Court or Congressional action on Section 101 remains murky, it is worth taking stock of patent prosecution and application trends following the PEG, and also, the Office’s accompanying Guidance on Section 112. In this post, we report on quarterly trends in office actions and filings before and after the PEG. We build on earlier analyses reported in PatentlyO and the USPTO Office of Chief Economist’s own report from earlier this year, Adjusting to Alice, which found that the PEG was followed by decreases in both the likelihood of receiving a rejection and the uncertainty in patent examination.

It is thanks to the exciting continued releases of patent data from the Patent Office, collectively as part of the Open Data Portal (in beta), that we can follow these trends in an attempt to understand the impact of policy. We encourage the USPTO to continue providing data and improving its coverage and quality, providing the only source of data that the courts and policymakers can turn to on the prosecution impacts of their work, as well as research and patent data startups. As to the office action and appeals data, discontinuities and quality issues in currently available datasets presented challenges to our analysis, which we overcame by developing a number of computational approaches. The accompanying PatentlyO Bar Journal Article, Parsing the Impact of Alice and the PEG, (hereinafter referred to as “Article”), has the details and code we used, as well as a summary of the supporting analyses described below.

We find, following the PEG:

1. Decline in 101 Subject Matter Rejections and Stabilization of Appeals: The prevalence of 101 subject matter rejections declined by 37% after the PEG with absolute declines most dramatic among “software” applications as previously defined. (Fig. 1) Ex parte appeal decisions addressing 101 subject matter appeared to stem their rise. (Article 1A) 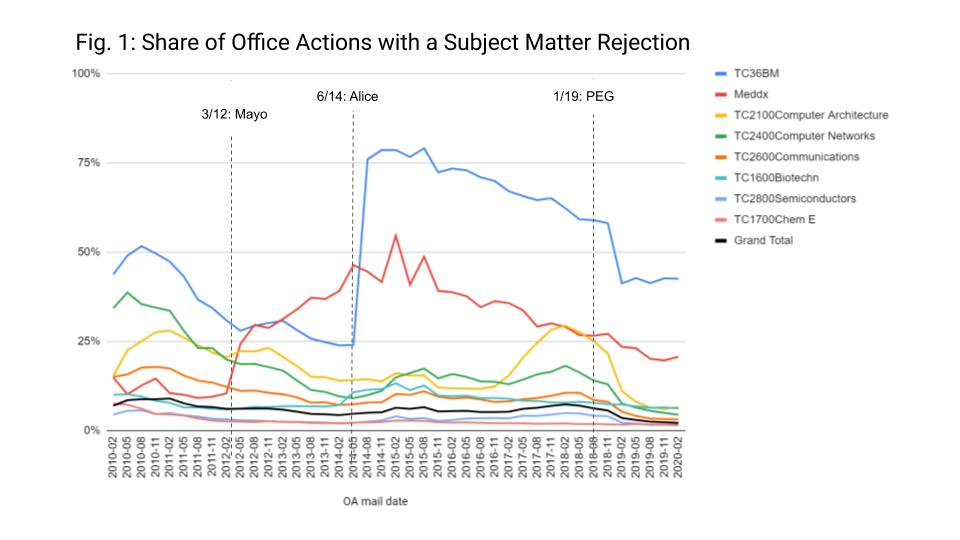 2. No Discernable Increase in 112 Rejections: The 112 Guidance issued by the Patent Office in January 2019 described the use of 112(a), (b), and (f) to address functional claims in computer-implemented inventions. Following the 112 Guidance, we did not discern an increase in the examiner’s application of 112 rejections, in general (Fig. 2) or at the subsection level, except in the case of 112(f) rejections as applied to “software” applications which have increased steadily since the USPTO’s February 2014 Executive Action on Claim Clarity and Federal Circuit’s June 2015 Williamson decision, both directed to functional claiming, from 2.7% in 1Q14 to 7.6% in 4Q19. (See Article 2A) 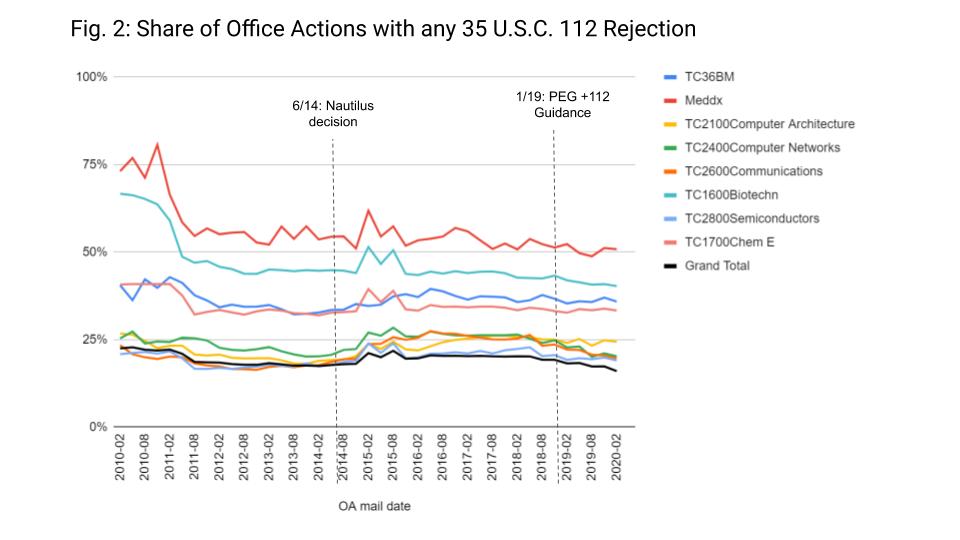 3. Leaving Small Entities Behind Through Forum Shopping?: Some applicants have responded to elevated 101 rejection rates by using analytic tools to draft their claims in order to “forum shop” out of Alice-impacted art units. Though the use of these tools is not observable, it is plausible that their cost puts them out of reach of small and micro entities, and might, as a result, lead to a greater concentration of discounted applications in these art units. However, when we looked at the data, we found that the share of applications by discounted entities over time had not increased but rather, has stayed relatively steady among applications filed from 2010 to 2018. (See Article Fig. 3)

4. No Noticeable Decline in “Medical Diagnostic” or “Software” Applications following Alice or Mayo: One limitation of focusing solely on rejection rates is that they do not capture applications “never filed” due to the changes in law or policy. To gauge whether or not there was an “Alice” or “Mayo” “effect” on the number of applications, we looked for declines, in absolute and relative terms, among medical diagnostic and software technology applications, as previously defined, but found no such declines. (See Article Fig.4) Although the PEG came out more than 18 months ago, we do not yet have a complete picture of application trends following the PEG, so cannot rule out that it was followed by increases in filings.

5. More Unique Words in Issued Patent Claims post Alice: Another limitation of focusing on examiner behavior is that it does not take into account changes in applicant behavior and the dynamic there between. With the help of Rocky Berndsen, Peter Glaser, and William Gvoth of Harrity and Harrity, we looked at the number of words included in patents filed after Alice. Applying a “differences in differences” approach, we found that the number of unique words in “software” patents relative to a baseline doubled from 10 additional to 20 additional words, consistent with the hypothesis that the Alice decision led to the addition of claim details. (See Article Fig. 5) As patents filed after the PEG are granted, it will be worth seeing whether or not outcomes along this metric have changed.

The data indicate that, following the PEG, the prevalence of 101 subject matter rejections, and likely frustration associated with same, declined. At the same time, we did not find that 112 rejections increased noticeably to take their place, or that caselaw or the PEG resulted in sustained diminished filings. While we are not able to report on the impact of the PEG on filings and application “quality” (words and details), due to time effects, fortunately, the USPTO’s data releases should seed continued study and analysis of the impact of it and future guidance and court decisions.

The authors represent that they are not being paid to take a position in this post nor do they have any conflicts of interest in the subject matter discussed in this post.
Hide comments