The USPTO's Board of Patent Appeals (BPAI) has an incredibly large backlog of ex parte appeals pending – more than 25,000. In 2006, that figure was less than 1,000 pending appeals. Since then, the backlog has grown month-after-month-after-month. Cases being decided by the BPAI now were fully briefed more than two years ago, and began the appeal briefing process more than three years ago. Most of those are on applications filed at least five years ago with priority claims reaching back even further. The current USPTO solution is to hire more Administrative Patent Judges – 100 new judges this fiscal year with at least that many arriving next year. I agree that this is an important part of the solution. However, in my view simply hiring more judges is insufficient.

The following chart looks at the number of BPAI decisions each month. The pattern reveals the results of a performance rating system (i.e., quota system) used to judge the Judges. Ordinarily, BPAI judicial performance is reviewed two times per year, and that process is reflected in a systematic incentive for the judges to do more work at the end of the fiscal year (September) and at the midpoint (March). The chart shows those months as the high-points for BPAI output and the subsequent months as low-points. 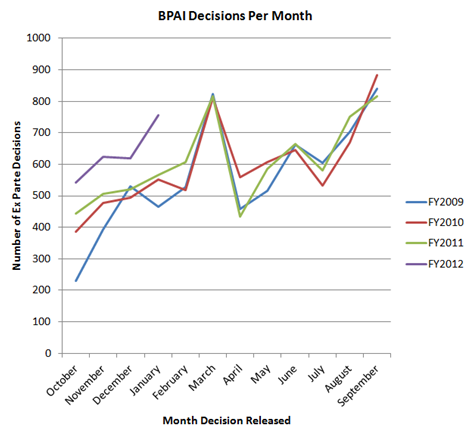 It seems to me that the current cadre of Administrative Patent Judges have proven that they have the capability of increasing their throughput by 60% or more in any given month. But, the Judges only act on that capability when properly motivated. I hate to play the "if I were manager" game, but once these phenomena are recognized, a likely general solution is fairly obvious – provide motivation for the Judges to more often work to their potential. Economists have shown that people almost always act in their own self-interest – that's why personal incentives work. However, in a team environment, personal incentives are rarely sufficient. Most highly successful teams also rely on team and other goal oriented incentives that suggest a culture of success. In my mind, the chart showing high-effort-as-deadline-approaches suggests a commitment to personal achievement but also a lack of commitment to the broader timeliness goal of ex parte patent appeal administration. Of course, timeliness is only one variable in the time-quality-cost equation, and the other important elements cannot be ignored.

As the PTO moves to more than double the size of the Board, now is the time to make structural changes to ensure a better future for this important segment of the Office.

Note - A key feature of the chart above is that the figures for FY2012 are significantly higher than for prior years. Unfortunately, the increase in productivity is still only slowing the growth of the backlog. With the increase in judges, I expect for the backlog to begin declining by the end of this fiscal year. Further, once implemented, the proposed increased appeal fees will also tend to reduce appeals filed.