This past fall at the Administering Patent Law symposium at Iowa Law, Professor Colleen Chien presented an argument in favor of more intentional experimentation by administrative  agencies such, as the USPTO to test policy concepts and proposed several possibilities.  Below, Professor Chien describes one such project, based on the Merges/Crouch proposal for deferring patentable subject matter analyses in prosecution.  Read the accompanying PatentlyO Law Journal article here:

This post is the second in a series about insights developed based on USPTO data. An accompanying PatentlyO Patent Law Journal article includes additional data and experimental design details; both are drawn from Policy Pilots: Experimentation in the Administration of the Law,  written for the 2018 Iowa Law Review Symposium on the Administrative State.

“The journey of a thousand miles begins with a single step.” – Lao Tzu

Responding to frustration with the Supreme Court’s patentable subject matter (PSM) decisions, the Federal Circuit has issued clarifying decisions, the USPTO has released new guidance regarding applying Section 101 (and 112), and Senators Coons and Tillis have been holding roundtables. 101 appeals and rejections, including pre-abandonment rejections, have risen following Alice and Mayo, particularly within impacted technology areas. (Figs 1A and 1B, details here and here). To support tracking the impact of its own guidance and related developments, the USPTO should release updated versions of office action data (the last release was in 2017). 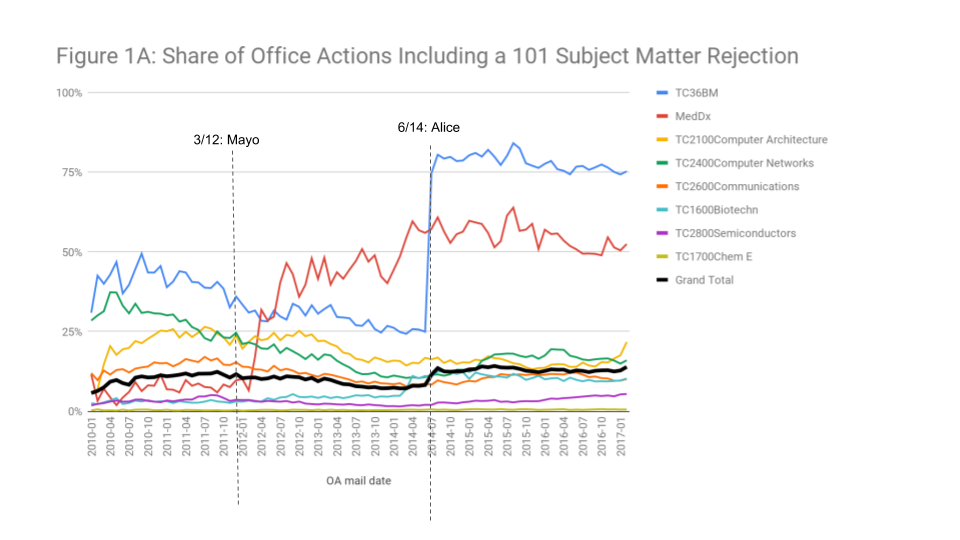 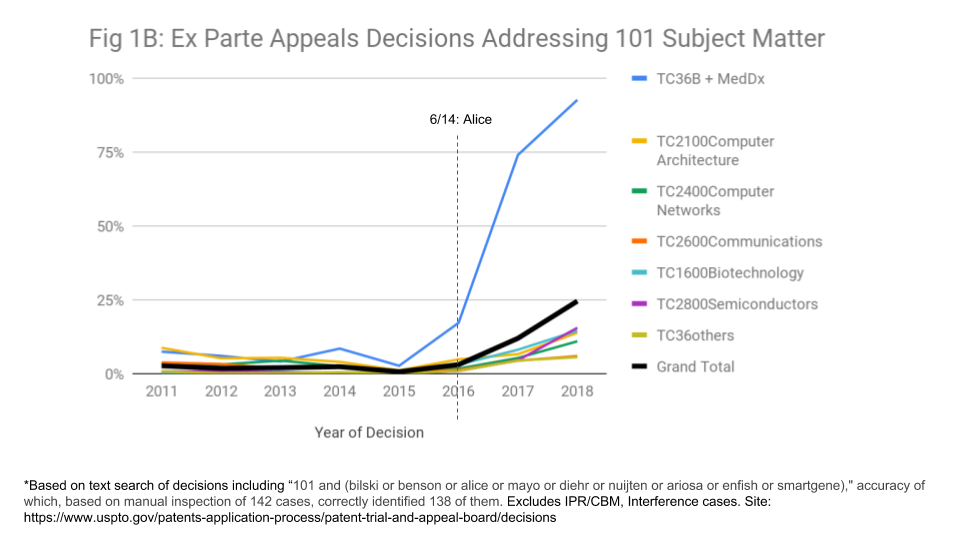 In this post, I propose a complementary approach that aims to conserve agency and applicant resources even while policymakers work to clarify the law. It builds on the idea of deferring 101 subject matter until other issues are exhausted first proposed by Robert Merges and Dennis Crouch, but with some important modifications. Deferral would be at applicant’s option, not mandatory, and the USPTO should roll out this intervention through a controlled trial with randomization, as the agency has done previously, to determine the practice’s effectiveness.

The case for deferring subject matter builds on the insight that 101 is rarely the single dispositive issue – among office actions prior to abandonment, less than 15% of TC36BM and medical diagnostic applications and 2% applications overall are “only 101.”  Yet 101 is controversial – the rate of ex parte decisions addressing 101 has also shot up, from less than 10% to over 80% in 2018 in medical diagnostic and software technology areas, and to 26% overall. (Fig 1B)[1]

Deferring 101 would borrow from the Supreme Court doctrine of avoidance, which allows the Court to “resolve[] cases on non-constitutional  grounds whenever possible,” in order to conserve court resources and legitimacy. Other federal agencies have also used deferral, for example, in the mid to late 2000s, when the application of immigration law to same-sex couples in some cases required family separation. To avoid this harsh consequence, Department of Homeland Security prosecutors administratively closed some cases, immigration judges granted continuances for unusually long periods in hopes that the law would change, and US Customs and Immigration enforcement officials granted requests for deferred action. That is to say, they avoided the law by deferring its application.

Avoiding PSM issues would allow cases to resolve, through allowance or abandonment, on less controversial, non-101 grounds.[2]  (The USPTO’s new guidelines implement this logic to a degree, shifting focus towards 112 and away from 101). But making 101 deferral optional, at applicant’s discretion, would preserve the benefits of compact prosecution and the freedom applicants enjoy to select a fast or slow track for each application.

The Advantages of Experimentation

Trying out applicant-initiated 101 deferral through a rigorous pilot has several advantages. First, unlike changing the law or its application which requires all to adjust, only applicants dissatisfied with the status quo would see a change. 85% of office actions don’t even include a PSM rejection I’ve found previously.

Second, implementing 101 deferral as a pilot with randomization, like the USPTO did when it conducted the post-trademark registration proof-of-use pilot, will support effective policy-making through evaluation, iteration, and refinement.[3] Design (intent-to-treat), ethical (through consent) and methodological (power, randomization, etc.) concerns and details are discussed in the accompanying piece.Rigorously tracking the impact of PSM on patent prosecution over the course of a pilot can also provide much-needed empirical support to 101 policy-making in general.

Finally, my proposal preserves the benefits of the status quo, including the little-discussed incentive prosecutors now have to add details to their patent applications and claims, a good thing. In work with students that I presented at the Federal Trade Commission’s recent hearings building on an earlier analysis in IP Watchdog by Will Gvoth, Rocky Bernsden, and Peter Glaser from Harrity & Harrity LLP, I observed that there has been a “flight to quality” among patent complaints and applications. Carrying out a differences-in-differences analysis, we found that specification length and counts of words and unique words in the first claim have grown among software applications relative to others following the Alice decision. Deferring 101 would preserve this previously unexplored impact of the “Mayo-Alice effect” on software patent drafting. If 101 were eviscerated by Congress, so too could the incentive to be more concrete in describing and claiming inventions.

If successful, the treatment would result in the diminished presence of 101 subject matter issues within ex parte appeals and pre abandonment rejections and, potentially, resolution time, e.g. closer to pre-Mayo or Alice levels. Applicant and prosecutor satisfaction with the process, changes made to what gets filed, timelines, and such factors would also be worth tracking.

With thanks to Santa Clara Law University students Jiu-Ying Wu, Nicholas Halkowski, Marvin Mercado, and Saumya Sinha and to William Gvoth, Peter Glaser, and Rocky Bernsden of Harrity LLP for assistance with data, and Hans Sauer and Jonathan Probell for their comments on earlier drafts.

[1] Even though 101 patentable subject matter issues appear in a quarter of 2018 appeals decisions, this share is still small compared to the share of decisions that mention, for example, “102” (, “103”, or “112” issues though note that these numbers are inflated because they do not include case specific limitations that can weed out false positives based on incidental mentions (such as “ 10/282102”)

[2]  For example, if an invention is incurably anticipated, obvious or unsupported, the case will have been resolved without considering subject matter. Likewise, if the claims have been re-formulated responsive to non-101 rejections and mooted any subject matter defects in the process, PSM will not factor into the application’s outcome.

[3] In that pilot, the USPTO randomly selected 500 registrations to participate in the initial program to assess the accuracy and integrity of the trademark register. Though companies selected to participate in the pilot had to comply with additional regulatory requirements, randomization ensured that the pilot’s findings were representative and its burdens, fairly distributed. See,  77 FR 30197, 30198 (explaining that randomness in the pilot was necessary to “ensure that the resulting assessment is not skewed by consideration of registrations with particular criteria, and that implementation of the rules does not create an unfair burden on specific types of trademark owners”). The results of the test and related USPTO reports, outreach and deliberations were used to expand and make the program permanent.