The grant rate of motions to stay is highly judge-dependent and (somewhat less obviously) district-dependent. The table below shows the approximate grant rate of contested motions to stay in major patent litigation districts since about the beginning of 2008. These data included around 150 motions, after excluding follow-on or duplicate motions on the same facts (e.g., in parallel cases against different defendants), stipulated motions, patent-owner-initiated motions, and motions initiated by declaratory judgment plaintiffs. The districts below are listed in order of decreasing frequency of the occurrence of such motions. 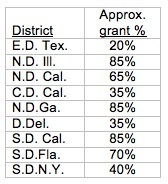 A review of the orders confirms a relatively clean division into favorable and unfavorable judges for stays. This division is often flawlessly mirrored in the reasoning of written orders. Courts usually analyze three factors when considering stays: prejudice, timing and simplification. Where stays are disfavored, courts focus on the prejudice that delay may cause to the patent owner, find excessive delay in filing the request a few months after service of the complaint, and identify a plethora of issues that will be left unresolved by reexamination. Courts where stays are favored search in vain for particularized prejudice to the plaintiff (e.g. deteriorating evidence), find that requests submitted on the eve of trial are timely, and focus on the possibility that the claims could be canceled by the PTO when analyzing simplification.

The data for this study were helpfully provided by the Docket Navigator.