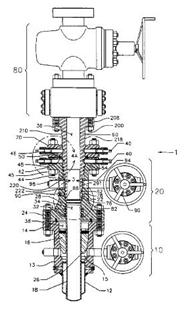 In a rare appeal from the Eastern District of California, the Federal Circuit has vacated the lower court’s order of preliminary injunctive relief. Duhn Oil’s patent covers a “frac mandrel” or tool for isolating the head of an oil or natural gas well. Cooper Cameron’s version is alleged to infringe when its lockscrews are engaged during installation.

Appellate Jurisdiction over Preliminary Injunction Orders: As an initial matter, the parties argued over whether the court held jurisdiction over the interlocutory appeal since the defendant (Cameron) had previously volunteered to halt the uses covered by the preliminary injunction. On appeal, the Federal Circuit found jurisdiction clearly granted by 28 U.S.C. § 1292 as interpreted by the Federal Circuit. “[I]f the district court’s order expressly grants an injunction, the order is appealable under § 1292(a)(1), without regard to whether the appellant is able to demonstrate serious or irreparable consequences.” Quoting Cross Med. v. Medtronic, 424 F.3d 1293 (Fed. Cir. 2005).

When does an order become an injunction?: A court must make particular findings before it can order preliminary injunctive relief. However, the court has much more leeway when making orders that relate more to the court proceedings such as orders for discovery, preservation of evidence, compelling witnesses, etc. This case raises, but does not answer the question of where the line is drawn between ordinary orders and preliminary injunctions.

Based on its opinion, the district court clearly believed that it had not issued a preliminary injunction. The opinion expressly held that “issuance of a preliminary injunction at this time would not be a measured and appropriate exercise of equitable discretion on the present evidentiary record.” Although it generally denied relief, the court did make a series of orders relating to Cooper Cameron’s “accounting practices.” These accounting practices primarily included maintaining specific evidence regarding equipment orders, items sold, and installation instructions given. The order also granted Duhn the right to photograph newly installed equipment. In addition, the court ordered that Cameron “provide instructions to its frac mandrel customers, which unambiguously state that the lockscrews are not to be engaged during installation or use of the frac mandrel.”

The Federal Circuit focused on the final requirement that Cameron provide installation instructions to its customers and classified that requirement as an injunction because it “specifically imposed . . . an affirmative obligation on Cameron . . . to prohibit Cameron from further allegedly infringing uses.”

The lower court had not intended to issue preliminary injunctive relief and had not specifically found either a likelihood of success on the merits nor irreparable harm absent injunctive relief. Therefore, the injunction was vacated on appeal.

In this case, there were insufficient grounds for the court to enjoin Cameron. A preliminary injunction requires the moving party to show both likelihood of success on the merits, and irreparable harm unless the injunction issues. The district court identified “strongly conflicting evidence” about the possible frequency of Cameron’s future infringement, and the absence of “a sufficient showing for injunctive relief of the scope and of the nature, [sic] including the notice requirement that Plaintiffs are seeking.” Duhn identifies no irreparable harm that it would suffer without the court’s order, and does not cross-appeal the denial of the broader injunctive relief it proposed. For these reasons alone, the injunction was improper. Therefore, we decline Cameron’s invitation to address invalidity and noninfringement in the first instance.

263 thoughts on “When does an Ordinary Order become a Preliminary Injunction?”