In our previous post, we discussed three major findings from the Berkeley Patent Survey—the most comprehensive survey to date in the United States, probably worldwide, on how patents are used by and affect entrepreneurs, startups, and early-stage high technology companies. As we noted in that post, the survey collected responses from over 1,300 companies less than ten years old (hereinafter, "startups") in the biotechnology, medical device, software, and hardware/IT sectors. In this post, we discuss three additional major findings. (For those interested in more information, a detailed discussion of the survey results is available here; a focused analysis on the drivers of startup patenting, here; and some background on the genesis of the survey, here.)

Our fourth major result is that our respondents—particularly software companies—find the high costs of patenting and enforcing their patents deter them from filing for patents on their innovations (see Fig. 1 below). Given the reported importance of patents to startups not only in the financing process, but also for strategic reasons—especially for increasing bargaining power—these cost barriers are worrisome.

Another of our survey questions revealed that the average out-of-pocket cost for a respondent firm to acquire its most recent patent was over $38,000. This figure is significantly higher than the averages for patent prosecution reported in the literature, which vary from a low of $10,000 to a high of $30,000.

Our respondents also offer a variety of other reasons for not patenting, including the ease of competitors designing around a potential patent and the belief that the innovation was not patentable (both of which are more salient for software companies) as well as the reluctance to disclose information in a patent and a preferred reliance on trade secrecy (which are more salient for biotechnology companies).

Figure 1. "For your last innovation you did not patent, which if any of the following influenced your company's decision?" 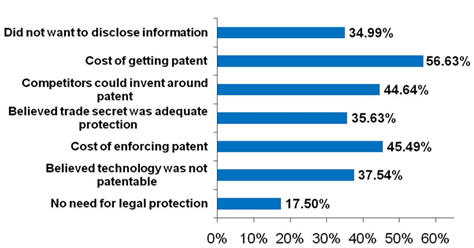 A fifth major finding is that although many respondents report licensing in patents from others, most of them did so to acquire technology, with fewer seeking licenses to avoid a lawsuit. So, while we find that 15% of technology companies licensed in at least one patent, there are industry differences.

Specifically, among biotechnology companies, while 37% had licensed in at least one patent, for their last license, 81% did so to acquire technology, and only 30% to (sometimes also) avoid a lawsuit. Among software firms, only 8% report taking at least one patent license, with 79% taking such a license to (at least in part) gain information or know-how. In each sector, less than 10% of companies taking licenses report licensing only to avoid a law suit.

When we restrict our focus to only venture-backed companies, inbound licensing is much more prevalent, with 37% of all companies licensing in a patent. However, there is once more wide variation from one industry to another. While 89% of venture-backed biotechnology companies licensed in at least one patent, only 12% of similarly-funded software companies had reported as much. Also, while only 3% of these biotech companies that had licensed at least one patent reported licensing in their last patent only to avoid a lawsuit, 22% of such software companies reported as much.

Last, we asked how much of a role patents play in the steps of the innovation process, from invention to R & D to the commercialization of products and processes. Somewhat surprisingly, the responses on the whole are rather tepid. For instance, biotechnology companies report that patents provide closer to a "moderate" than a "strong" incentive to engage in the innovation process. Among software companies, the results are even more striking, with them reporting that patents provide less than a "slight" incentive. These findings raise questions about the importance of patents to innovation for entrepreneurs and startups. Indeed, the results have spurred some vigorous debate in the blogosphere of late, and we devote our entire next post on Patently-O to discussing them in detail.

88 thoughts on “Patenting by Entrepreneurs: The Berkeley Patent Survey (Part II of III)”