Patstats.org, coordinated by Professor Paul Janicke of the University of Houston Law Center, recently released its analysis of patent suit filings for calendar year 2010.  Patstats reports that although the total number of patent cases filed in 2010 was 3,605 – significantly higher than the 2,744 cases filed in 2009 – much of that increase can explained by the 752 false marking cases filed in 2010.  If the false marking cases are excluded, the increase is closer to 4%.  Professor Janicke was kind enough to provide a set of historical data for context, which I used as the basis for the below graph. 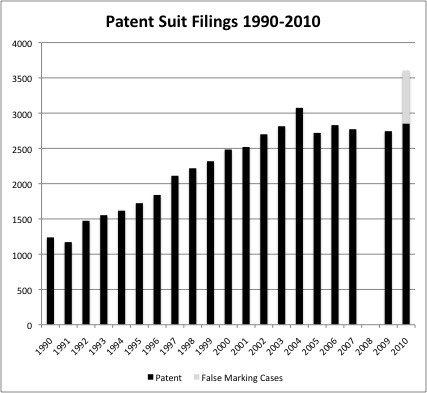 Note that this chart only shows false marking cases for 2010, and thus assumes that there were not high numbers of false marking cases in previous years (for support of this assumption, see http://www.grayonclaims.com/false-marking-case-information/).  For additional analysis of patent suit filing data, as well as other interesting and useful statistics relating to patent litigation, see www.patstats.org.