A patent holder can initiate the reissue process in order to correct a defect in an issued patent. 35 USC 251 indicates that the types of defects that may be corrected include defects in the specification; defects in the drawings; errors in claiming too much; and errors in claiming too little. A major statutory limit on the reissue process is that "[n]o reissued patent shall be granted enlarging the scope of the claims of the original patent unless applied for within two years from the grant of the original patent." The limit on improper broadening of reissues is strict and applies when claims are "broader in any respect." Predicate Logic, Inc. v. Distributive Software, Inc., 544 F.3d 1298 (Fed. Cir. 2008).

Since 2006, the prosecution pendency of reissue applications has hovered at an average of around 5 years based upon an analysis of all reissues issued each year. 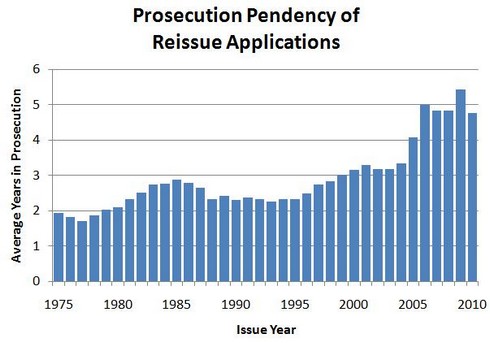 I looked particularly at a sample of 439 recently completed reissue applications.  In that sample, 88% received an initial non-final rejection; 46% then received a final rejection; 23% filed a request for continued examination (RCE); and only 1% completed the BPAI appeal process. As you might expect, each layer of processing added additional time to the prosecution. Thus, for example, applications with a notice-of-appeal in the file history had an average pendency of well over 8 years.

There is remarkably little variation in pendency across technology areas. Over the past five years, reissues in Technology Center 1600 (Biotechnology and Organic Chemistry) took an average of 4.92 years to complete while those in Technology Center 2800 (Semiconductors, Electrical and Optical Systems)  took 4.86 years.  The slowest Technology Center was 2600 (Communications) where reissue prosecution took 5.14 years on average.  Of those applications with an initial rejection, the first rejection was mailed 1.8 years (on average) after the reissue request was filed (median of 1.5 years after filing). The relative parity (in terms of prosecution pendency) amongst the various technology centers suggests that the reissue prosecution timeline is driven by an overarching USPTO approach to reissue examination.

In 2010, the USPTO reissued 947 patents — more patents than any year in history.  The prior records were established in 2008 (647 reissues) and 1875 (630 reissues). In 1875, 630 reissued patents represented about 5% of all patents issued that year. However, the 2010 record represents fewer than one-half of one percent. Although long application pendency is usually a two-way street — caused by both the USPTO and applicant delays, the relatively small reissue docket suggests that the PTO could be doing much more to speed the process.