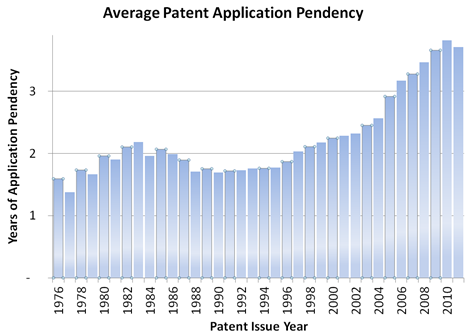 The time series chart above shows the average utility patent application pendency for US patents grouped according to the year of issuance. These data differ from that normally reported by the USPTO because I do not count the filing of a request for continued examination (RCE) as an abandonment+refile. Two other caveats: (1) this calculation looks only at issued patents and does not consider the pendency of applications that were abandoned; (2) the calculation ignores priority claims that greatly impact overall pendency. The 2011 figures are only through May 2011.