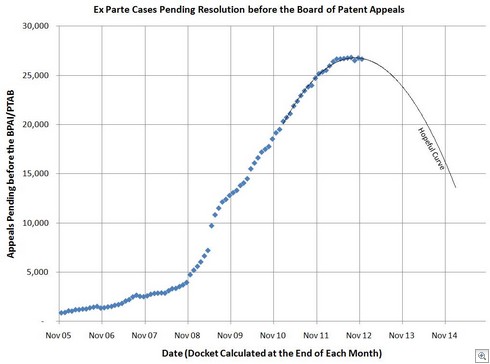 The PTAB continues to show signs of taking control of its ex parte appeals docket.  The backlog of cases has remained fairly steady for the past nine months.  The hope is that the trajectory will fit to a second-order polynomial with the backlog beginning to decrease substantially over the next two years. More than hope, the PTAB continues to hire more judges to work in Washington DC as well as in Detroit, Dallas, and San Jose. As these judges come online, the Board’s potential throughput will continue to increase. Of course hope can only sustain us for so long.

52 thoughts on “BPAI Backlog and its Hopeful Trajectory”