Failure to Confirm: We all still remember Paul Michel as Chief Judge of the Federal Circuit, but it wasn't yesterday that he stepped down. Rather, we are nearing the three anniversary of his 2010 retirement (as a Federal Judge). In 2010, President Obama nominated Edward DuMont to replace Judge Michel. However, DuMont's nomination floundered. In 2011, President Obama nominated Richard Taranto for the post. However, the Senate has now failed to confirm Taranto's nomination. I expect that President Obama will re-nominate Taranto this month – giving the Senate another two years to consider filling the slot. No Senator has voiced any opposition to Taranto's nomination.

Two additional Openings: President Obama has not yet nominated a replacement for Judge Richard Linn who took Senior Status on November 1, 2012 after thirteen years in office. In addition, Judge William Bryson is scheduled to take Senior Status on January 7, 2013.

Future Openings?: Judges Newman, Lourie, and Dyk are all eligible for senior status.

Over the past two years, Judges Newman, Bryson, Linn, & Dyk have shown the highest propensity for participating in a panel opinion that includes a dissent. Judge Newman continues to be the most frequent dissenting author, followed by Judges Dyk and O'Malley. These results are shown in the chart below that includes results from all Federal Circuit opinions coded in Westlaw (CTAF) for 2011-2012. 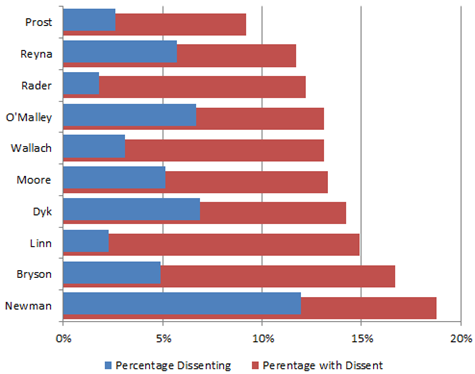