Section 282 of the Patent Act lists the defenses to allegations of patent infringement. In recent years, the Federal Circuit has applied that statute somewhat strictly in finding that the section defines the complete list of defenses. In one case, the court held that the patent office's improper revival of an abandoned patent application could not justify fit as defense. See Aristocrat Technologies Australia v. International Game Technologies (IGT) (Fed. Cir. 2008) (erroneous revival not a cognizable defense under §282).

The present case also involves revival of an abandoned application. Trying a different tact, the defendant here (State Farm) argued that the patent is unenforceable because the patentee lied to the PTO regarding the "unintentional" nature of the abandonment. (Generally, abandoned patents and patent applications can only be revived if the abandonment was unintentional). The charge is inequitable conduct.

The patent at issue is owned by the US Government but currently exclusively licensed to the private company – Network Signatures. U.S. Patent No. 5,511,122. The patent issued in April 1996 and the second maintenance fee was due in October 2003. (7 ½ years after issuance). The PTO then gives patentees another six-months grace period to pay the fee. However, the Navy decided not to pay the fee because of there was no known "commercial interest" in the patent at that time. As a result, the patent was deemed abandoned and thus unenforceable in April 1996. Two weeks later, the predecessor of Network Signatures contacted the Navy IP folks to see whether it could license the patent. At that point, the patent suddenly became valuable and the Navy immediately requested that the PTO revive the patent based upon the "unintentional" abandonment of the application. Without requiring the submission of any evidence or explanation, the PTO granted the petition and revived the patent. Since obtaining the license, Network Signatures has filed almost 100 infringement lawsuits against a wide variety defendants. Now, I should mention here that the predecessor to Network Solutions had actually tried to contact the Navy prior to final expiration to express interest in the patent, but was not routed to the IP department until after the patent had been abandoned. 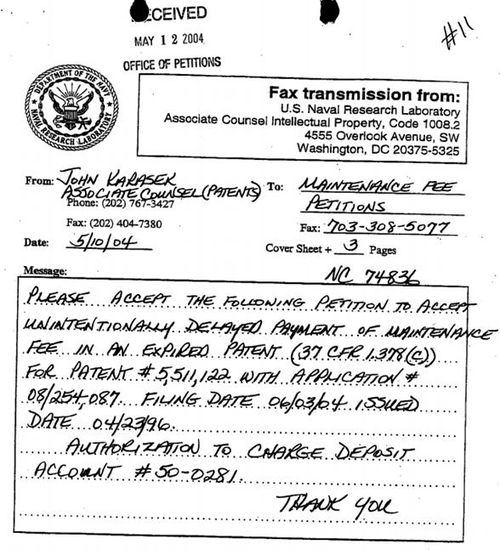 Neither the patent statute nor the regulatory rules "unintentional," but the MPEP indicates that "[a] delay resulting from a deliberately chosen course of action on the part of the applicant is not an 'unintentional' delay within the meaning of [the code]." MPEP 711. Seemingly addressing the particular situation at issue here, the MPEP indicates that "a change in circumstances that occurred subsequent to the abandonment of an application does not render 'unintentional' the delay resulting from a previous deliberate decision to permit an application to be abandoned." Id. On the other hand, a "mistake of fact" appears to be a justified "unintentional" reason.

After reviewing this evidence, the district court sided with the defendant and held (on summary judgment) the patent unenforceable due to inequitable conduct based upon the patentee's statements that the abandonment was unintentional. On appeal, however, the Federal Circuit has reversed – finding that the patentee's action does not constitute "material misrepresentation with intent to deceive."

Mr. Karasek's compliance with the standard PTO procedure for delayed payment, using the PTO form for delayed payment, does not provide clear and convincing evidence of withholding of material information with the intent to deceive the Director. On matters unrelated to the substantive criteria of patentability, but within the authority of the Director, "it is almost surely preferable for a reviewing court not to involve itself in the minutiae of Patent Office proceedings and to second-guess the Patent Office on procedural issues at every turn." Laerdal Med. Corp. v. Ambu, Inc., 877 F. Supp. 255, 259 (D. Md. 1995) (citation and internal quotation marks omitted).

Judge Newman penned the opinion that was joined by Judge Wallach with the result of a reversal. With the complete reversal, it appears that the majority opinion result is a summary judgment of no inequitable conduct.

Writing in Dissent, Judge Clevenger argued that the unintentionality statement made by the patentee was clearly material but that the question of intent should go to trial. For Judge Clevenger, the issue of materiality is clear: "If the PTO had known the true facts, I have no doubt whatsoever that Karasek's revival petition would have been denied." However, from Judge Clevenger's perspective, the issue of intent is still up in the air. In particular, whether the Karasek knew that the circumstances of the revival were, and made a deliberate decision to withhold them.

Responding to Judge Clevenger's position in a footnote, Judge Newman explained that we could not expect further explanation from the attorney regarding the unavaoidability of the abandonment because PTO rules and the revival official form only require a statement that the abandonment was unavoidable. In essence, because the standard practice is to not explain the reasons for abandonment that we should not blame the filer for failing to provide reasons.