Post-grant patent maintenance fees offer an easy mechanism for shifting patentee behavior. In the US, patent holders must pay a maintenance fee three times during the life of an issued patent. I think of the fee as akin to property tax. When a real-property owner fails to pay the property taxes, the state forecloses. In the patent system failure to pay the maintenance fees similarly results in the property right be taken from the non-payer. However, instead of reselling the patent at auction, the government instead announces that the previously patented invention is no longer protected by any exclusive right, i.e., that the patent right has been abandoned.

Patent rights are usually thought of as normal goods in that a higher price typically leads to a lower quantity demanded. In the maintenance fee context, higher maintenance fees lead to more patents being abandoned. And, most patents go abandoned by the time that the third-maintenance fee rolls around because patent holders decide that the extra payment is not worth the extra money.

In a recent draft article titled Removing the Troll from the Thicket: The Case for Enhancing Patent Maintenance Fees in Relation to the Size of a Patent Owner’s Non-Practiced Patent Portfolio, Professor David Olson (BC) focuses on maintenance fees as a mechanism for going after entities with large patent portfolios that are not being practiced. Olson writes:

It is proposed that patent maintenance fees be increased according to a sliding scale tied to the number of non-practiced patents a patent owner has in its portfolio. Thus, as the size of a firm’s patent portfolio increases, so too does the maintenance fee multiplier charged for all its patents, beginning with the second maintenance fee due date. All patents with common ownership interests would be aggregated in determining the fee enhancement. Because the enhanced fees do not kick in until 7.5 years after issuance, incentives to invent and to disseminate should not be significantly reduced. This proposal will encourage large patent portfolio holders to pare down their holdings by determining which of their older patents are not worth maintaining. This will benefit competitors and new inventors who are currently subject to hold-up problems from large portfolios — many of which are particularly caused by old, low-value patents held en masse.

[Read the article here: http://ssrn.com/abstract=2318521]. Olson’s approach is essentially a weak version of a “working requirement” seen in some countries that makes a patent unenforceable unless it is being used by the patentee. Instead of requiring working, Olson provides a monetary incentive.

Although Olson’s article is focused on the problem of “trolls,” his proposal would have its greatest impact on large technology companies such as IBM, Samsung, Intel, and others whose patent porfolios include large numbers of patents that are not being practiced. Those companies are already “suffering” from major increases in maintenance fees implemented by the USPTO earlier in 2013. 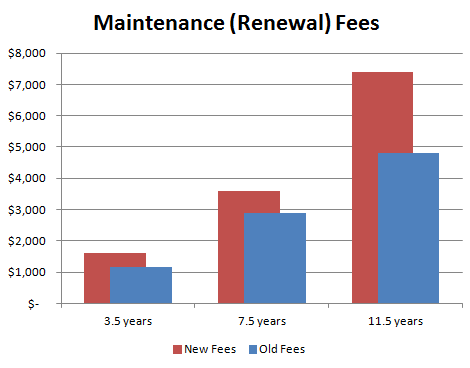 In my mind, the largest political roadblock to implementation is the increased burden placed on patent owners to actually understand the patents that they own. Because of the complexity and highly technical nature of modern patents and patent claims, it is rarely a trivial process for a patent owner to know whether its patents actually cover its processes in place. This is especially true because patents tend to be filed well before a commercial embodiment is on the market. Olson acknowledges this problem with the statement that a “possible objection is that this Article’s proposal will be expensive and burdensome for patent holders. . . . This burden and expense should not be understated. Accordingly, it may make sense to give a fairly long lead-in time to allow firms to comply. But it should also be noted that while this will be burdensome to patent owners, the current system with all of its uncertainty as to ownership and patent coverage is burdensome and costly to others.” Olson also writes that the patent owner is the “least cost avoider” in terms of determining whether the underlying invention is being practiced by the patentee. The problem with that argument is that, under the current system, nobody even needs to ask that question because it is irrelevant to patentability or patent enforcement (except as to remedies). Hopefully in a follow-on paper, Olson can provide us with a better mechanism for judging whether his proposal is better than the status quo or other alternatives. Setting this aside, Olson’s paper comes at an opportune time as Congress is currently drafting legislation and considering proposals to address the “problem of patent trolls.”