Guest post by Sarah Burstein, Associate Professor of Law at the University of Oklahoma College of Law 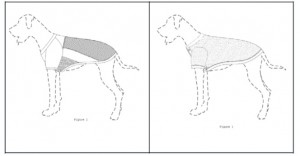 Mark Cohen is the principal shareholder of MRC and the named inventor on both patents. Hunter is a retailer of licensed sports products, including pet jerseys. In the past, Hunter purchased pet jerseys from companies affiliated with Cohen. The relationship broke down in 2010. Hunter subsequently contracted with another supplier (also a defendant-appellee in this case) to make jerseys similar to those designed by Cohen.

MRC sued Hunter and its new supplier for patent infringement. The district court granted summary judgment to the defendants, concluding that the patents-in-suit were invalid as obvious in light of the following pieces of prior art:

It is true that “[i]n order for secondary references to be considered, . . . there must be some suggestion in the prior art to modify the basic design with features from the secondary references.” In re Borden, 90 F.3d at 1574. However, we have explained this requirement to mean that “the teachings of prior art designs may be combined only when the designs are ‘so related that the appearance of certain ornamental features in one would suggest the application of those features to the other.’” Id. at 1575 (quoting In re Glavas, 230 F.2d 447, 450 (CCPA 1956)). In other words, it is the mere similarity in appearance that itself provides the suggestion that one should apply certain features to another design.

MRC also argued that the district court failed to properly consider its evidence of commercial success, copying and acceptance by others. The Federal Circuit disagreed, concluding that MRC had failed to meet its burden of proving a nexus between those secondary considerations and the claimed designs.

The Federal Circuit hasn’t actually reached the second step of this test in a while. That’s because it has been requiring a very high degree of similarity for primary references (see High Point & Apple I). For a while there, it looked like it was becoming practically impossible to invalidate any design patents under § 103. Now we at least know that it’s still possible.

And unfortunately, the Federal Circuit seems to have revived the ill-advised Borden standard. As I’ve argued before, the second step of the § 103 test has never made much sense. Even the judges of the C.C.P.A., the court that created the test, had trouble agreeing about how it should be applied. But the Borden gloss—that there is an “implicit suggestion to combine” where the two design features that were missing from the primary reference could be found in similar products—is particularly nonsensical. At best, this Borden-type evidence suggests that it would be possible to incorporate a given feature into a new design, from a mechanical perspective—not that it would be obvious to do so, from an aesthetic perspective.

All in all, this case provides an excellent illustration of the problems with the Federal Circuit’s current test for design patent nonobviousness. Perhaps now that litigants can see that § 103 challenges are not futile, the Federal Circuit will have opportunities to reconsider its approach.

64 thoughts on “Design patent nonobviousness jurisprudence — going to the dogs?”