In March 2013 the USPTO significantly raised the maintenance fee charges. Most pointedly, the 11 ½ year renewal fee has jumped 65% from $4,810 to $7,400. The 11 ½ year renewal is last of three fees due and also the most expensive. Market theory for ordinary goods suggests that an increase in the price of goods will result in a reduction of the quantity demanded. The relative proportionality of the reaction depends on a number of factors, including the price elasticity of demand. In the past, I have suggested that the price elasticities of many of the patent office fees are relatively inelastic at their current price point, but I wanted to see how patent owners are responding to the increased fees.

Initial Conclusion: The price elasticity of demand for the 11 ½ year renewal fee is quite inelastic.

Data: I created two groups of patents: One where the 11 ½ year renewal fee was due prior to the March 2013 fee-change and a second group where the 11 ½ renewal fee was due after that date. To simplify the analysis, the pre-fee-change group only included the patents whose 12-year date was prior to the fee change in order to also capture late payments. Similarly, the post-fee-change group only includes patents whose 11 ½ year date was more than 6-months after the fee date to avoid cases where the lower-fee was pre-paid. For each group, I pulled up data for 11-weeks of patents to see what percentage of 11 ½ renewal fees were paid (of those eligible). Those results are shown in the table and charts below. 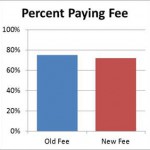 This change was relatively constant for both large and small entities. [Small entities are less likely to pay renewal fees, but the relative drop at the time of the fee change was proportional.]

What does this mean?: First, the USPTO fee raise is a boon to USPTO revenue – at least tens of millions of additional dollars per year for the agency. The USPTO has monopoly power over patent rights in the US and, in that situation, the high inelasticity generally indicates

that raising prices will raise revenues. To even further maximize this profit, the PTO could hold an auction for each patent at the 11 ½ year mark – giving the patent to the highest bidder. Of course, this money must come from somewhere and many corporate patent budgets are relatively fixed – leading to a choice between new filings and maintenance fee payments. The USPTO is likely wise to avoid more substantial increases in fees – over the long run markets find ways to avoid monopoly power that is abused.

Big Caveats: I looked at this particular fee change because it was so large and so I suspected that a response would be fairly easy to measure. These fees are typically due at a point about 15-years after the invention date. Many folks would suggest that – by that point – the patentees should have a fairly good handle on the value of the underlying innovation and the patents covering that innovation. Further, at that point patent valuation will likely have a strong bi-modal distribution with a substantial number of patents having essentially no value because technology has moved-on (and is never coming back) and then a substantial number with value because the innovation (or its kin) is being used in products on the market. If an innovation covered by a patent is being used in the marketplace then the patent is likely worth significantly more than $10,000. The leading theory is that, by this 15-year-mark, there are not many patents in no-mans-land that are still not on the market but that have a good chance of being on the market within the next few years. Of course, this is a theory with little empirical basis except that it does help to explain the low elasticity shown above.

In other realms, I have shown more price elasticity due to USPTO fee changes. These are most likely where the patentee is not choosing between patenting and abandonment but instead is choosing whether or not to add a feature, such as additional patent claims or an extremely long disclosure. When the USPTO significantly raised the costs for both of those, patentees reacted by substantially reducing demand for those services.

31 thoughts on “The Price Elasticity of Demand for Patents”