Almost three years ago, I guest posted here about Patent Troll Myths, my study of the ten most litigious NPEs at that time. One of my great regrets in that study was that I did not have a control set—a randomly matched sample to compare against the studied NPEs. Thus, in that paper, I tried to compare with other people’s outcome data. In the years since much has happened. First, most of the cases I studied came to resolution. Second, I collected data on nonNPE litigation to compare with my NPE litigation. I gathered data on 1313 cases distributed over a 25 year period in roughly the same proportion as the 917 cases filed by NPEs over that time. The numbers grow substantially starting in 2004. This led to 792 nonNPE patents versus 352 NPE patents, which indicates that the NPEs asserted the same patents in more cases.

The result is my new paper, A Generation of Patent Litigation: Outcomes and Patent Quality, which is forthcoming in San Diego Law Review. This is the first of at least two papers; the next one will focus on innovation and markets. The paper is full of comparative data about number of defendants, number of patents, choice of districts, complexity of litigation, etc. I don’t have enough room here to describe all of it, so I want to point out some of the key takeaways.

First, the data confirms the conventional wisdom: that NPEs prefer to settle earlier. There were more settlements among NPEs, many fewer trials, and durations were shorter even when holding things that lengthen cases constant, like appeals, merits rulings, and stays. There was one effect that bears further mention, though: NPEs filed more cases that were transferred or consolidated, and transfer/consolidation tended to lengthen cases. 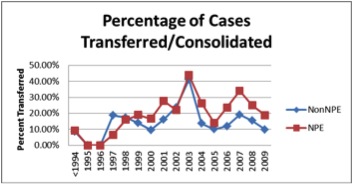 That is, of the patents asserted by NPEs, 88% were never tested on the merits, and 97% of the cases did not involve a patent invalidation. Most studies only report invalidity rates once a patent is adjudicated (and it’s bad for NPEs, like 91% of adjudicated patents because patents are only validated after trial, and NPEs never go to trial). This study asks what about the other 97% that are never adjudicated? I suspect the answer will vary depending on who you talk to, though I give some clues based on procedural dismissals, etc. The full paper includes reexamination results as well. Interestingly, reexaminationrs were only lightly correlated with litigation results.

Third, because I had data about all of the cases involving each of the patents, as well as the outcomes in each of those cases, I was in a unique position to test something I don’t think anyone else has been able to test: what causes a patent to by invalidated? The problem with just focusing on those patents that are adjudicated is that you lose most of the data in the set – data about the very same patents asserted by the same parties against potentially similar parties. The question is why does a patent eventually get invalidated?

It turns out that there is nothing on the face of the patent that will tell you. All of the traditional patent metrics, like future citations, number of claims, continuations, etc. are not statistically significant. (It turns out that this is true even if you look at adjudicated patents). Instead, aside from unobserved features of the patent (perhaps it’s “true” quality) and technology (which will be addressed in a later paper), the factors that most correlate with invalidation in court are those that relate to whether the defendant is more likely to challenge the patent in the first place. Thus, the number of defendants, number of times the patent has been asserted, the number of reexaminations (but, interestingly, not the results of the reexaminations), etc., are most predictive of invalidation. Now, to be sure, the NPEs in the study were more likely to do these things, but once the regression corrected for these choices and other selection variables, the NPE dummy variable added zero explanatory power in the model. Invalidation was a function of suing too often, suing the wrong parties, suing too many parties, or suing on too many patents at once, regardless of NPE status.

There was one further surprising result in all of this. Backward citations, or the number of other references cited in the patent, had a significant effect on invalidity. But the sign was wrong! The more citations, the more likely a patent is invalid. This is contrary to the conventional wisdom that “gold plating” with more references can help the patent. My interpretation is that more references means that the patent was one more likely to be asserted in a high impact way (thus, reexamined, etc.), and that backward citations is merely another variable that identifies likelihood of a challenge. I do not think it is about crowded art, because forward citations do not have the same result, which you would expect in a crowded art.

That’s all I can write in a guest post, but there is much more in the paper, including examination of infringement, reexamination outcomes (and their correlation to litigation outcomes), choice of district over time, etc. This is prepublication, so comments appreciated.

18 thoughts on “Guest Post by Prof. Risch: A Generation of Patent Litigation: Outcomes and Patent Quality”