New patent litigation (original complaint filing) is down 40% from this time last year. The chart below comes from LexMachina whose founder, Mark Lemley, offers the speculation that the drop is largely due to the Supreme Court’s recent patent law activity — especially the fall-out from Alice Corp.  Along with Alice, we have a set of additional legal issues that favor accused infringers, including indefiniteness (Nautilus) and fee shifting (Octane Fitness).  Further, we are also well into the reign of post-issuance reviews (IPR, CBM, and now PGR) and the vast majority of repeatedly-asserted patents are involved in a parallel administrative review.  All these factors come together to provide plenty of reason for patent holders to slow-down on complaint filings. Of course, the change and the purported cause cannot be said to be ‘significant’ in the statistical sense. 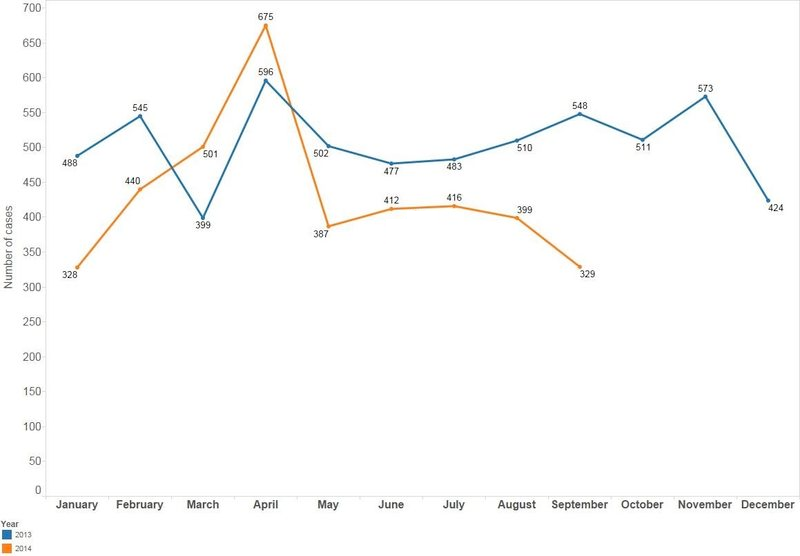 We previously discussed the jump in April 2014 as a likely artifact caused by a threatened retroactive fee-shifting legislation.

In thinking about this issue, I was surprised to see HP’s most recent lawsuit as a plaintiff where it asserted three seemingly weak patents. U.S. Patent Nos. 6,089,687, 6,264,301, and 6,454,381.  These patents serve as HP’s attempt to control the market for replacement ink cartridges for its printers and have titles such as “providing ink container extraction characteristics to a printing system”; “identifying parameters in a replaceable printing component”; and “specifying ink volume in an ink container.”  The defendant in this case is Chinese ink-knockoff manufacture Ninestar.

The claims of these patents are clearly susceptible to Alice Corp in that the seeming points of novelty are basically very simply data structures.

wherein the printer portion determines an ink volume associated with the ink container based on the fill proportion parameter and the selected ink volume range.

Here, my understanding is that the hardware components were all known prior to the application here and the invention is simply to store two parameters on the cartridge (ink container scale parameter (specifying container volume) and fill proportion parameter (specifying how full it is)). The use of these parameters was also well known prior to the invention, but (apparently) they had never been put on an ink cartridge before.  Until recently, we would think this claim has an obviousness problem.  Now, it looks like it has patent eligibility problems as well. See HP v. Ninestar, 14 cv 4473 (N.D. Cal., complaint filed October 6, 2014).

62 thoughts on “A Major Drop in Patent Infringement Litigation?”