Although it sounds of a malformed naive question, at times patent applicants do want to copyright their patent.  The patent application may, for instance, include software code, prose, or particular schematics that would seemingly be amenable to copyright protection.

In 1987, the USPTO created an official policy allowing patentees to include a “Copyright or Mask Work Notice in Patents” in order to “protect the various intellectual property rights of the author or inventor.”  Those instructions were then codified in 37 C.F.R. 1.71(d)-(e)(1988).  The rule requires that a copyright notice be accompanied with with a grant of permission to make certain copies:

Unfortunately, neither the rule nor statute provide any indication of the impact of a notice failure.

Published works are no longer required to include any copyright notice, and the PTO has never indicated (AFAIK) that submission without the copyright notice constitutes a waiver or abandonment of copyright protections.  However, the failure to include a (c) notice could potentially be relevant to fair-use analysis.

Santa Clara Copyright Law Professor Tyler Ochoa pointed me to Korzybski v. Underwood & Underwood, 36 F.2d 727 (2d Cir. 1929).  In that 75 year old case, the appellate panel held that a patent filing served as a dedication of all rights in the disclosure to the public domain.

. . . The defendant has done no more than photograph the [patented] anthropometer. This we hold it had a right to do, because the anthropometer was an embodiment of the drawings of the patent. The copyright was invalid, because the subject-matter had become a part of the public domain when complainant filed the prior application which resulted in the grant of his patent.

An inventor who has applied for and obtained a patent cannot extend his monopoly by taking out a copyright.

The Korzybski decision is based two distinct doctrines: (1) failure of formalities (no longer the law) and (2) the traditional judge-made public policy that copyrights should not be used to extent patent rights (likely still the law). 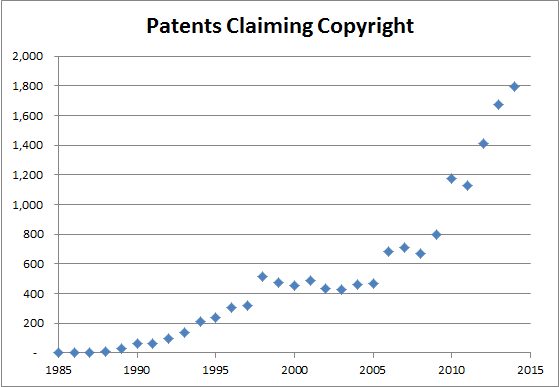 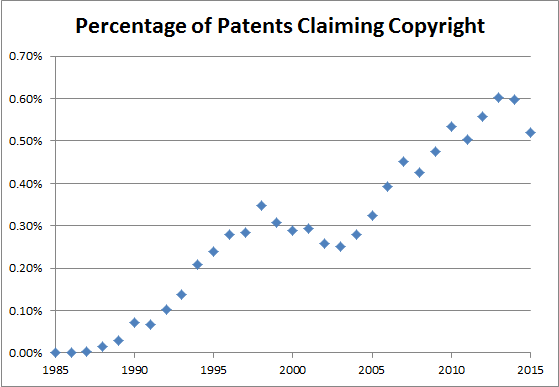 Although the relative percentage has changed over time, it has always remained under 1%.  My basic explanation for the percentage being so low is that the copyright notice requires an express waiver of certain rights – why do that without some justifiable gains?

15 thoughts on “Copyrighting Your Patent?”