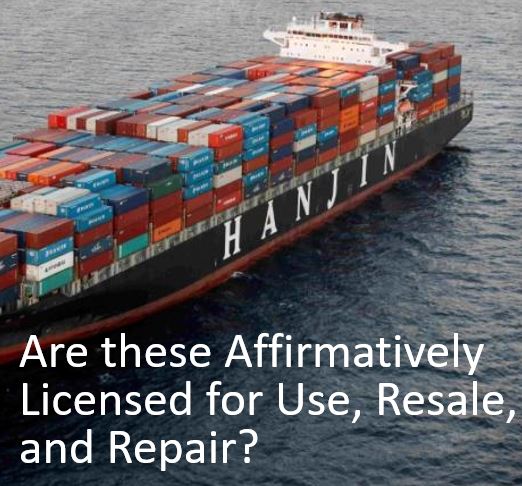 The first rounds of merits briefs have now been submitted to the Supreme Court in Impression Prods. v. Lexmark. The case questions the extent a patentee can control the entire resale and repair market for its products.  For products originally sold in the US, the Federal Circuit held that express use/resale limits at the point of first-sale are effective – even against subsequent bona fide purchasers. For products sold overseas, the Federal Circuit held that US Courts should presume no exhaustion of the US patent – this would automatically prohibit 3rd party importation into the US.

As a property law professor, I tend to think about about the mass confusion among the students as they try to work through the law associated with real covenants and equitable servitudes on land.  It creates substantial confusion among lawyers. But what we want is a system where property rights can be fairly and openly traded without even having lawyers extensively involved with each of our purchases.  With personal property courts long ago rejected servitudes (such as use and resale restrictions) that bind subsequent purchasers. Unlike real property, personal property moves and is often transferred without substantial paperwork or record-keeping, and allowing a set of unique restrictions has the potential of gumming up the marketplace.  The Federal Circuit in this case went all the way to the other side — holding that the presumption in foreign sales is that no US patent rights are exhausted.  I purchased my last couple of smart phones through the used market – and have also repaired them several times.  Under the law, I probably should have taken steps to ensure that all of the original equipment manufacturers affirmatively granted repair and resale rights.  Coming together, the Federal Circuit’s approach here has the potential to limit the market for the repair and reselling of goods.  I would suggest that those activities are incredibly beneficial to our society in terms of resource allocation and avoiding waste as well as empowering citizens and avoiding anticompetitive market behavior.  Although these policy goals are relevant to the Supreme Court decision-making, the Court’s primary analysis pathway should be doctrinal.

In these cases, the most important brief is often the amicus filing by the U.S. Government. Here, the brief USG brief was filed on January 24 by President Trump’s newly appointed acting solicitor general (Noel Francisco) who (like Obama’s SG) has taken the position of supporting the challenger (Impression) against the patentee (Lexmark) and the Federal Circuit.  Time will tell whether this stance is more generally predictive of the new administration’s stance on patent rights and patent enforcement. [15-1189_amicus_reversal_united_states]

The Government frames the questions presented as follows:

Answering these questions, the Government argues simply that “restrictions on post-sale use or resale are not enforceable under U.S. patent law” and that the Federal Circuit’s approach is wrong.  This is the same rule that applies generally to attempts to place a restrictive covenant on personal property.  As a minor caveat, the Government takes the position that, under limited circumstances, a foreign sale might not exhaust the associated U.S. patent rights.

The basic justification for this approach is to ensure that we have a working commercial market. The brief quotes the 1895 Keeler decision: “The inconvenience and annoyance to the public” if patent rights are not exausted by the first authorized sale [is] “too obvious to require illustration.”

Since A.B. Dick was overruled in 1917, this Court has rejected every attempt to invoke patent law to control the use or resale of an article after the first authorized sale in the United States.

At the international level, the Government suggests that the court allow express reservation of rights for foreign sales – this would thus allow a German company to sell its products in Germany (with an express export restriction) and then use its U.S. to patent to prevent those products from being sent to the U.S.  This gives the manufacturer more control over the market and would allow for price discrimination (i.e., charging higher prices in the U.S.).

In its merits brief, petitioner Impression Prods. takes a harder stand on international exhaustion — arguing that the court should follow its own prior precedent in the copyright case of Kirtsaeng and hold that any authorized sale by the patentee exhausts all U.S. patent rights – even if the authorized sale is abroad.  [15-1189-merits-petitioner]   Professor Feldman agrees in her brief, naming the Federal Circuit’s actions as “reversal from below” [15-1189_amicus_pet_professor_robin_feldman] as did the Huawei brief (although in different words) [15-1189_amicus_pet_huawei_technologies].

A common argument for exhaustion is that it allows for a robust resale market that greatly benefits consumers and helps price discrimination by allowing third party arbitrage.  Although U.S. prices are low for some goods, they are very high for others (such as pharmaceuticals and printer ink).  International exhaustion would help to solve that problem (although there are many regualtory hurdles associated with importing .  In its brief, the AARP join with EFF and Public Knowledge (and others) to argue this point: “Manufacturers currently exploit weak exhaustion rules to harm consumers. . . . Limitations on resale and repair rights lead to monopolization rather than competition.” [15-1189_amicus_pet_public_knowledge]

Costco is a business that is actively engaged in the sort of price lowering arbitrage discussed by AARP and argues that the Federal Circuit’s exhaustion rules “impose enormous costs for manufacturers, retailers, and consumers.”  They effectively ask – will the american retailers need to inspect patent licenses for all of the components and sub-components found in the products they sell? [15-1189_amicus_pet_costco_wholesale_corporation]  Similarly, an interesting trade group – the Association of Service and Computer Dealers International filed its brief and explained how the no-exhaustion rules impact the market for hard drives, DVDs, Flash Memory, and other consumer product. [15-1189_amicus_pet_ascdi] The UCC (Article 2) provides some protections here, but does not, for instance, provide authority to repair.

FSU Professor Frederick Abbott has an interesting take. Abbott is an expert on international trade law.  He writes:

A fundamental flaw in the approach of the Federal Circuit involves its reasoning that a rule of territoriality of patent rights precludes U.S. courts from taking into account activities of U.S. patent owners outside of the United States. The international agreements governing the international patent system do not prescribe such a rule of territoriality. . . The rule of independence of patents prescribed by the Paris Convention[] provides that acts taken by patent authorities in one country do not affect patent rights in other Paris countries.  recognition by this Supreme Court that first sales in foreign countries exhaust U.S. patent rights would not affect patents granted outside the United States.

A clear exhaustion rule promotes the alienability of patented articles and reduces transaction costs. Unlike clear, reliable property rights, idiosyncratic arrangements of rights that depend on what covenants or conditions an upstream seller has attached to a chattel impose high information costs on purchasers. . . . Exhaustion doctrine also prevents patentees from extracting a patent royalty at multiple stages in a product’s distribution chain, which would compensate them in excess of the societal benefit their inventions have provided.

It will be interesting to see how the ‘other side’ responds here .

65 thoughts on “Can Your Patent Block Repair and Resale and Prevent Arbitrage?”