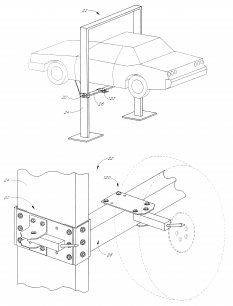 After receiving substantial criticism for refusing to allow claim amendments during Inter Partes Reviews (IPRs), the USPTO began to to relax its standards somewhat.  In this case, however, the Federal Circuit (C.J. Prost) has rejected the PTO’s expanded approach – holding that “the Board did not properly consider the arguments petitioner set forth in its opposition to the patent owner’s motion to amend.”

Tire Hanger’s patent covers a way of temporarily hanging a wheel that has been removed from a car on a mechanic’s lift.  Upon Shinn Fu’s request, the PTAB (acting on behalf of the Director) instituted the IPR and the patentee subsequently (and successfully) petitioned for an amendment to the claims in order to overcome the prior art.  Eventually, the PTAB agreed with the patentee that that amended claims were patentable — leading to this appeal by Shinn Fu.

Perhaps the most important portion of the opinion comes in footnote 3.  There, the court writes about Shinn Fu’s reliance on additional references in its opposition – added after the amendment:

Although the Board faulted Shinn Fu for relying on additional references in its opposition, it is not surprising that it pursued this course of action in light of Tire Hanger’s amendments. In particular, those amendments added limitations that necessitate human involvement throughout the process. Indeed, the Board recognized this as the fundamental purpose of the amended claims in its Final Written Decision.

Although not a direct decision, the point from the court here is that an amendment by the patentee should likely open the door to allowing the patent challenger to add further references to its obviousness challenge.

20 thoughts on “Lifting the Bar: Federal Circuit finds that the PTAB improperly allowed Amendments during IPR”