Eric Sutton is a senior patent counsel at Oracle and an adjunct professor at Chicago-Kent College of Law. Any views or opinions expressed by him in this article are solely his own and do not necessarily represent those of Oracle Corporation, its subsidiaries or affiliates.

Patent applicants, especially for software-related technologies, often file provisionals just before product releases, presentations at conferences, or publications of white papers or marketing materials. In-house patent portfolio managers frequently reassure business leaders that the technologies are protected by the provisionals, and outside patent counsel often similarly reassure in-house patent portfolio managers. However, due to time and budget pressures that often impact provisionals, relying on a provisional for priority may be significantly riskier than relying on a non-provisional.

Consider the hypothetical example below: 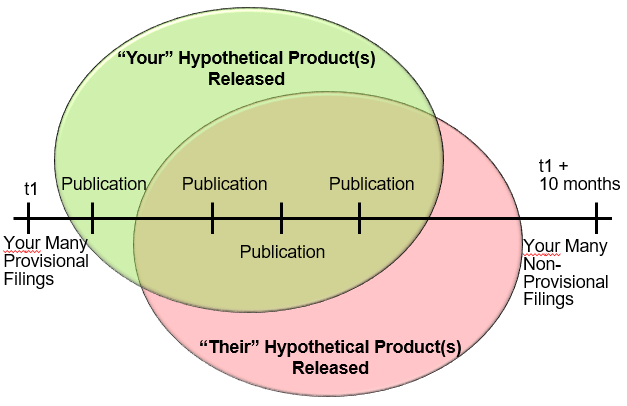 In a big data analysis of provisional application quality, focused on comparing provisional application content to non-provisional claims using Innography®, LexisNexis® PatentAdvisor®, and self-developed software, I found that many patent attorneys seemingly do rely rather extensively on their provisionals.[iii] On average, applicants rely extensively on their provisionals by allowing an average of ten months of risk for intervening prior art by filing the first-filed child non-provisional ten months after the corresponding provisional. Whether or not that intervening prior art actually shows up is beyond their control, particularly if they have already let the cat out of the bag by sharing their technology with others.

The chart below shows percentages of cases at different levels of word stem miss rates. 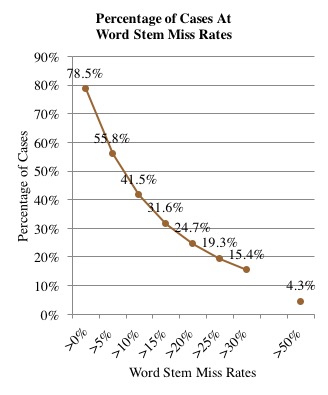 As shown, about 19.3% of cases were missing 25% or more of the unique word stems, a point that is likely beyond the comfort level of most patent practitioners. That said, 21.5% of cases had a 0% miss rate, indicating that a large group of patent practitioners is avoiding the written description and enablement risk that comes with varied language.

After a careful analysis of stems at different thresholds, it turned out that the top 3% of stems (516 stems) occurred 30 or more times in the sample and included stems that, for the most part, would likely not be considered relevant to a written description analysis, whether or not a synonym was present in the provisional. The choice of a cutoff level was subjective, but the cutoff itself was objectively applied in the sense that all terms above the cutoff were removed from the study and all terms below the cutoff remained in the study. The rationale used for the subjective cutoff level was to pick a level that was just beyond any level including the most common terms occurring in computer-related claims. Although the sample of cases was not limited to computer-related cases, computer-related terms excluded as being part of the top 3% were, for example:

Using the list above as a proxy for familiar common terms was helpful in picking a cutoff point even though a significant portion of the sample did not involve computer-related innovation. Stems beyond the top 3% boundary remained in the study. These less common stems occurred 29 or fewer times in the sample of 1905 claims.

Should the miss rates go up or down after removing the common stems? My hypothesis was that miss rates would go down because terminology such as “compris” (excluded as within the top 3%) might often be added by attorneys down the road as claims are solidified. At a minimum, more cases would have a 0% miss rate when fewer stems are searched. Others predicted that the miss rates would go up for other buckets because common terminology is usually present in the provisional, at least as boilerplate. Therefore, removing the common terminology would reveal the true incompatibility between provisionals and non-provisional claims.

I was not willing to tolerate the same miss rates as I did in the analysis for all stems. Because we are focusing on only the stems that occur relatively infrequently (in 29 or fewer out of 1905 claims), it is significantly more likely (though not certain) that these stems would reflect content that could be relevant to written description or enablement issues.

Others were right to think the results would get worse. Removing the top 3% of stems reduced the average number of unique stems per claim by 27 stems (45.8%) to 22.8 stems. Out of those 22.8 uncommon unique stems remaining, on average, provisionals were missing 5.3 for an average miss rate of 17.7%, up by 4.4%. Personally, I was shocked at this result and felt uncomfortable on behalf of the patent bar.

The chart below shows percentages of cases at different levels of uncommon word stem miss rates. 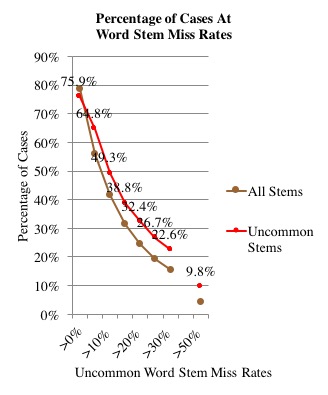 As shown, about 26.7% of cases were missing 25% or more of the unique word stems. The 26.7% uncommon stems mark is up from the 19.3% mark for all stems, reflecting a delta of 7.4%. If having 25% or more uncommon stems missing is beyond the comfort level of most patent practitioners, then practitioners should be uncomfortable with at least 26.7% of the provisionals being filed. I was equally as shocked to see that 9.8% (up by 5.5%) of cases were missing 50% or more of the uncommon stems. The largest cluster was 24.1% (up by 2.6%) having a miss rate of 0%, although there were a few miss rates even at 100%.

Due to the skewed distribution with miss rates falling at both ends of the spectrum, statistical metrics such as standard deviation did not provide much insight into the dataset beyond the charts shown. Nevertheless:

Although I am not qualified to opine on the laws of specific other countries, I do know that many other countries generally have a stricter view on specification support for the purposes of preserving priority. According to Heather McCann, a European Patent Attorney at EIP: “Having a mismatch in the literal terminology of the U.S. provisional and a child PCT application or a child European direct national filing could significantly reduce the possibility of obtaining patent protection and successfully defending a validity challenge, post-grant, if the contents of the U.S. provisional application were published (even by the applicant) prior to the child PCT or child direct national filing.”[ix]

Unfortunately for U.S. applicants, unless they are keen on priority issues, non-U.S. patent offices might be able to reject cases from U.S. applicants more frequently based on a difference between common U.S. practice and foreign written description and enablement laws.

Because inequitable conduct involves intent, which is fact-specific, this article does not delve any deeper into this potential issue. That said, it would be interesting to hear an argument and supporting explanation against such a finding if the applicant incorrectly claimed priority even though 100% of the uncommon word stems were missing from the provisional.

With 27% of the provisionals missing a quarter or more of the broadest non-provisional claim’s uncommon unique word stems, there is much room for the patent bar to either improve provisional application quality or avoid inaccurate priority claims. Perhaps this could also be accomplished by prioritizing the conversion to a non-provisional or filing incremental provisionals as more details become available, rather than waiting 10 months for the conversion.

[i] For more information on the written description and enablement requirements, particularly as they apply to software-related innovation, see Sutton, E. Software Patents: A Practical Perspective (ver. 2.2, Sept. 2017), available on Amazon at http://a.co/9xcPNr9 (a software patents textbook in support of a law course offered at Chicago-Kent College of Law).

[iii] N=1905, down from an original sample of 2341 after excluding: (a) unparseable provisionals, (b) clearly incomplete claims (for example, a method claim ending at the colon), and (c) later-filed provisionals that paired with the same first-filed non-provisional; provisionals filed Mar. 2012 to July 2013 across all companies, spanning the AIA transition; raw provisional pdfs available from PAIR, provided by Innography® in Jan. 2017; filing dates provided by Innography® directly and through use of their excellent patent portfolio analytics tool; sample spread over TC 1600, 1700, 2100, 2400, 2600, 2800, 3600, and 3700.

[v] The first claims of the first-filed non-provisionals were stemmed using a popular word stemming library to result in unique word stems.

[vi] The text of the corresponding provisionals, as a result of the Adobe® Acrobat® 9 Standard OCR (see above), was searched for any text that would match the unique word stems. Spacing issues and formatting issues were corrected before performing the comparison.

[vii] The provisionals involved were filed between March 2012 and July 2013, bridging the AIA transition. If attorneys changed practice from pre-AIA to post-AIA, those changes were not sufficiently detectable in this sample. Although I personally believe that attorneys have not changed practice post-AIA; to fully test that hypothesis, I would need a sample significantly earlier than the AIA and a separate sample significantly later than the AIA. These samples simply were not available to me when I started the study.

[ix] See, for example, European decision T 1983/14 “Purchase of mobile top-up/JANUARY PATENTS LTD.” (Nov. 23, 2015) (“The case law of the Boards of Appeal requires that the subject matter be directly and unambiguously derivable by the skilled person from the disclosure as a whole. The expressions ‘invoiced together’ and ‘charged for together’ . . . disclosed no more than that transactions could take place on the same machine[, not] multiple products being invoiced as one transaction.”); European decision T 2061/13  (June 20, 2017) (“subject-matter of claim 1 is . . . not directly and unambiguously derivable by the skilled person . . . such that . . . claim 1 does not have a right to priority from P1.”).

114 thoughts on “Guest Post by Eric Sutton: Do You Know What your Provisional Application Did Last Summer?”