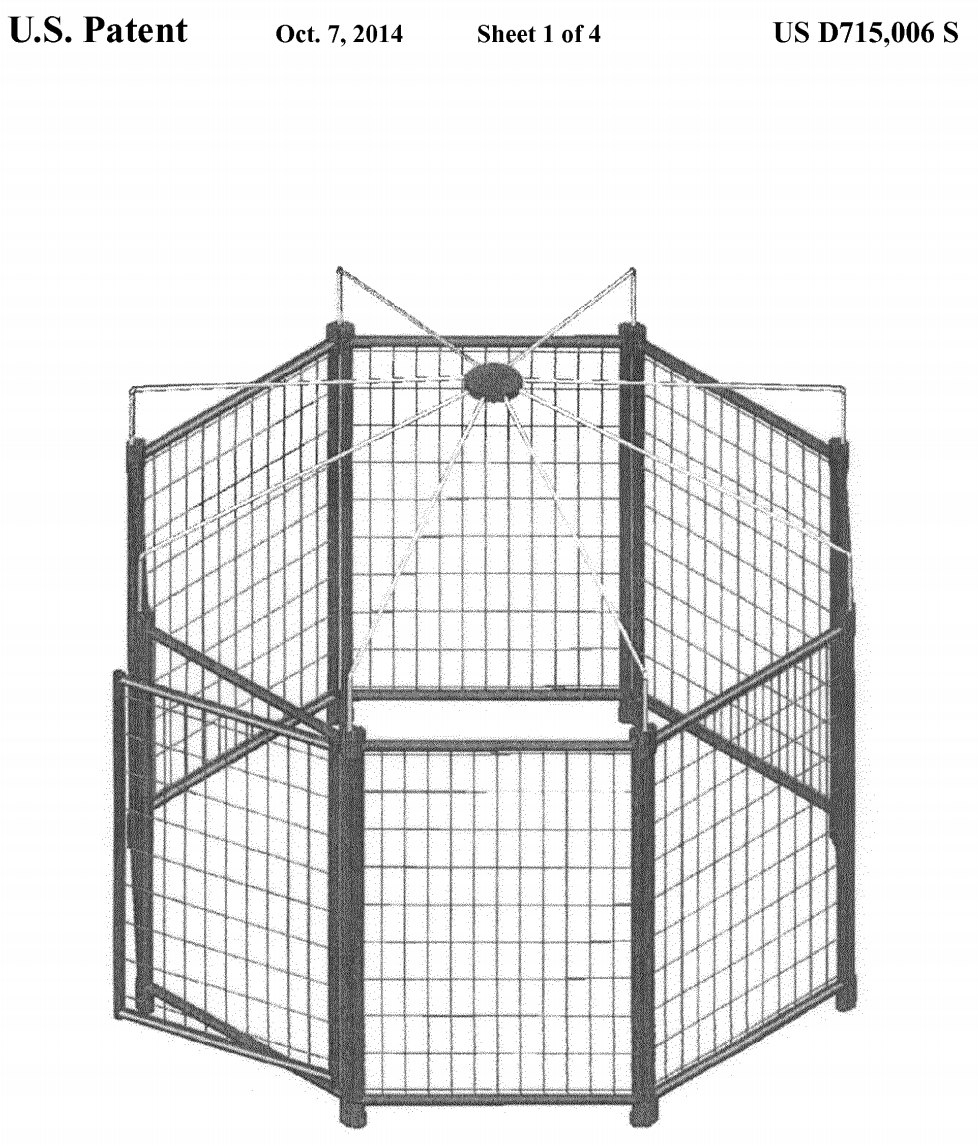 Advantek’s U.S. Design Patent No. D715,008 covering the above-pictured “pet gazebo” that Advantek also sells as its flagship product. Long-Walk allegedly copied the design in its “pet companion” product.  However, the district court dismissed the case on the pleadings — finding that the prosecution history barred any infringement finding.  On appeal, however, the Federal Circuit has reversed.  This is one of the few cases considering prosecution history of a design patent.

The Prosecution: The design patent application included Figures 1-4 (kennel without a cover) as well as Figure 5 (kennel with a cover) and explained that the embodiments are identical except for the cover.  In its initial action, the Examiner issued a restriction requirement dividing between Group I – Figs 1-4 (kennel without a cover); and Group II – Fig 5 (Kennel with a cover) — finding that the two groups are distinct embodiments and further that the single claim requirement of design patent bars the inclusion of figures having distinct combinations of elements.  The applicant “disagreed” but still elected Group I and withdrew Figure 5.  The patent issued without the applicant filing a divisional application to cover the withdrawn claimed figure.  Note here that the figures of a design patent are effectively the claim — thus any amendment to the figures is also a change to the claim scope and coverage.

In the litigation, Walk-Long’s product does have a cover and the basic question is whether the design patent can cover a product with the cover — knowing that the patentee originally claimed a kennel with/without a cover – but but then dropped the with-a-cover portion.

Doctrine of Surrender: In Pacific Coast Marine Windshields Ltd. v. Malibu Boats, LLC, 739 F.3d 694 (Fed. Cir. 2014), the Federal Circuit explained that prosecution surrender does apply in design patent cases. Here, however, Advantek argues that its design without-a-cover is present in the accused kennel (as a substructure of the whole).  Although Walk-Long sells the kennel with a cover, it is first assembled without the cover — and remains without a cover until the cover is installed. Although eliminating the cover appears to actually broaden the claims — the appellate court did not particularly decide whether there was surrender. Rather, the Federal Circuit determined that at a minimum, anything surrendered was outside the scope of the accused product.

Regardless of whether Advantek surrendered claim scope during prosecution, the accused product falls outside the scope of the purported surrender, contrary to the district court’s conclusion. Advantek elected to patent the ornamental design for a kennel with a particular skeletal structure. A competitor who sells a kennel embodying Advantek’s patented structural design infringes the D’006 patent, regardless of extra features, such as a cover, that the competitor might add to its kennel.

As a footnote, the court tied-back to Samsung — noting in dicta that any damages collected should be on the profits of the structure without the cover.  “Of course, if the accused skeletal structure is only a component of an accused multicomponent product, Advantek would only be able to seek damages based on the value of the component, not the product as a whole.”