I am fairly disappointed with this decision by Chief Judge Prost.  The Federal Circuit flipped the jury’s infringement verdict based upon its revised claim construction.  Nothing strange there, except that the court did so without actually construing the term in question.  Seems improper to me. – DC

WARF’s Patent No. 5,781,752 covers the use of prediction in parallel processing in order to increase the accuracy of processor speculation.  A Wisconsin jury agreed that Apple’s A7 and A8 chips infringed and awarded $234 million in damages.  On appeal, the Federal Circuit has reversed — holding that “no reasonable juror could have found infringement based on the evidence presented.”  As such, the district court improperly denied Apple’s JMOL motion.

Parallel processing can get through the code faster because it doesn’t require strict linear processing order.  That setup, however, can lead to “ambiguous dependency” problems — where one parallel process needs input (such as a data address) from another process also running in parallel. In that setup, the processor still might “speculate” and run the instruction with the expectation that things will work-out.  A “mis-speculation” leads to data errors. 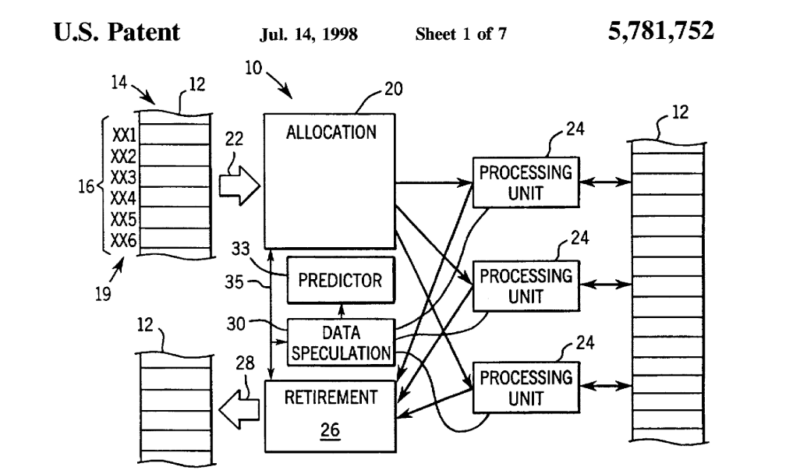 The issue on appeal centers on the patent claims that require a “prediction” of mis-speculation associated with a “particular” data-load (LOAD) instruction that is then used to decide whether to call the instruction.

On appeal, the Federal Circuit reversed the jury verdict of infringement and instead held that the “particular” instruction is not met in Apple’s product.  While the accused processors do the prediction, the problem is that the each ‘prediction’ value is typically* associated with multiple instructions — not just one particular instruction.

Thus, in the appeal, the Federal Circuit effectively construed the “prediction associated with the particular [load] instruction” to require a one-to-one relationship between the prediction and the instruction rather than a one-to-many.  Thus, the no infringement result. So far, this seems like a fairly typical Federal Circuit decision.

On appeal, the Federal Circuit did not address the waiver and instead jumped-in with some sort of quasi-construction of the claim term.  The appellate panel never states that it is construing the claim term but does so in the following sentence:

In our view, the plain meaning of “particular,” as understood by a person of ordinary skill in the art after reading the ’752 patent, requires the prediction to be associated with a single load instruction.

Note here that this is the entirety of the court’s legal analysis of the claim term’s meaning.  The court does not review the prosecution history, or evidence of a person having skill in the art, etc.  But, instead just provides a conclusion.

The result is that the jury verdict is gone.  Perhaps on remand, the district court will order a new trial — and perhaps this time will go ahead and construe the term.  In addition, WARF has a narrow infringement argument suggested by the fact that Apple’s products are capable of operating with the prediction value associated with a single instruction.  During trial, however, WARF did not present evidence that showing that the processors actually ever worked in that manner.

18 thoughts on “Quasi-Claim-Construction by Federal Circuit”