The PTAB’s obviousness finding is based upon two prior art references. However, the references are not being combined so-to-speak. Rather, the Board found that the first reference (O’Brien) teaches all limitations of the lossless encoding scheme in Realtime’s claim 1.  The second reference (Nelson) was used essentially to show that the “string encoding” described in O’Brien was the same as the “dictionary-based encoding” in Realtime’s claims. 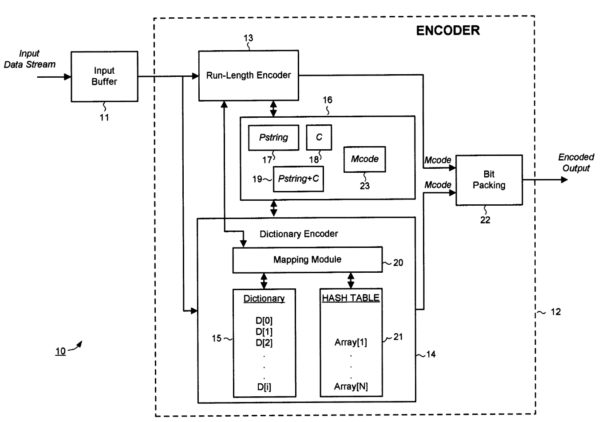 On appeal, Realtime argued a lack of “motivation to combine” the references — based upon longstanding precedent that a “factfinder must further consider the factual questions of whether a person of ordinary skill in the art would be motivated to combine those references.” Dome Patent L.P. v. Lee, 799 F.3d 1372 (Fed. Cir. 2015).

Here, however, the Federal Circuit ruled that motivation-to-combine was not necessary since the obviousness finding did not combine two different disclosures. Rather, the Board used the second reference to help explain the first reference.

We conclude that, in this case, the Board was not required to make any finding regarding a motivation to combine given its reliance on O’Brien alone. . . . HP relied on Nelson merely to explain that O’Brien’s encoder is a type of dictionary encoder. . . . Under these circumstances, the Board was free to come to the very conclusion it reached: that O’Brien alone disclosed every element of claims 1–4, 8, and 28. And because the Board did not rely on Nelson for the disclosure of a particular element or teaching, the Board had no obligation to find a motivation to combine O’Brien and Nelson.

The CAFC noted that an anticipation determination rather than obviousness may have been more appropriate since O’Brien taught all of the elements of Realtime’s claim.  However, the court concluded that obviousness still worked — since  “a disclosure that anticipates under § 102 also renders the claim invalid under § 103, for ‘anticipation is the epitome of obviousness.’” Connell v. Sears, Roebuck & Co., 722 F.2d 1542 (Fed. Cir. 1983) (quoting In re Fracalossi, 681 F.2d 792, (CCPA 1982)).

Patent at issue: U.S. Patent No. 6,597,812, covering lossless data compression and decompression. Realtime sued HP and others back in 2015 and that led to the responsive IPR filing that is the subject of this appeal.

48 thoughts on “Obviousness without a Motivation to Combine”