Coda and Goodyear cooperated in a project to commercialize self-inflating tire technology invented by the CEO of Czech-based Coda (Hrabal).  Coda shared its information as well as functional prototypes with Goodyear representatives, including Robert Benedict.  At the meeting Benedict photographed the prototype without permission (after asking to be left alone for a moment).  All of this sharing was done under a non-disclosure agreement between the companies.  Benedict then ghosted and did not return attempted contacts from Coda.

Self-Inflating-Tire: Pause here to note that this is pretty neat technology. As a tire rolls along, its sidewalls are repeatedly squashed and then expanded in a rotating procession. That squash-expand cycle is used here to power a simple air pump that keeps pressure in the tires. 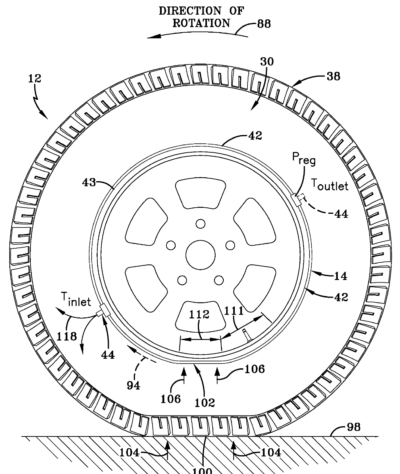 Back to the Story: One month after their meeting with Coda, Goodyear applied for a patent titled “Self-Inflating Tire Assembly” Naming Benedict and Mr. Losey as inventors.  The patent issued as U.S. Patent No. 8,042,586 “with claims covering the allegedly novel, proprietary, and confidential information Coda disclosed to Goodyear.”

Coda was clued-in to what happened at a later date from an email from a former Goodyear employee stating:

I am retired now from Goodyear and see in the news today that they have copied your SIT. Unfortunate.  I thought China companies were bad.

Coda sued, requesting to add Hrabal as inventor on the ‘586 patent and delete Benedict and Losey.  See 35 U.S.C. 256. Coda also identified eleven other Goodyear patents included confidential technology invented by Hrabal, and requested that he be added as inventor on those as well. The complaint also alleges trade secret misappropriation.

Although the story might sound sounds compelling, the district court still dismissed the complaint for failure to state a claim.  The crux of the dismissal centers on an additional piece of evidence – 2008 article published by Hrabal that, according to the district court found, disclosed the information that Coda “now claims was secret when disclosed to Goodyear in 2009.”  The district court denied Hrabal’s request to amend its complaint to provide details regarding the differences between the published article and the information taken by Goodyear.

On appeal, the Federal Circuit has vacated the dismissal — finding that Hrabal’s complaint sets out a plausible claim for correction of inventorship. In particular, the court held that the facts outlined above “allow the reasonable inference that Mr. Hrabal conceived the invention of the ’586 patent and that Messrs. Benedict and Losey did not” and that Hrabal should be considered a joint inventor.  The appellate panel identified the lower court’s error as procedural. Namely, in its motion-to-dismiss, the court considered evidence outside of the pleadings (the 2008 publication), but did not permit Hrabal to present explanatory evidence. Under motion-to-dismiss rules, [i]f a court does consider material outside the pleadings, the motion to dismiss must be treated as a motion for summary judgment under Rule 56 and all parties must be given a reasonable opportunity to present all material pertinent to the motion.” See Fed. R. Civ. P. 12(d).

In this case, the parties “hotly” dispute whether the 2008 publication actually discloses the alleged novel trade secrets – and so a judicial conclusion is inappropriate at the pleadings stage.

The district court erred in considering the Hrabal article for this purpose without converting Defendants’ motion to dismiss into one for summary judgment and giving Plaintiffs a reasonable opportunity to present all pertinent material.

On remand, the district court will need to reconsider these issues and must also permit the plaintiff to amend its complaint in order to clarify the trade secrets and inventive elements at issue.  “We …. aware of no reason why they should not be permitted to file their proposed amended complaint on remand.”

The district court had also dismissed the trade-secret claims as time-barred based upon the Ohio statute of limitations that requires a claim filed “within four years after the misappropriation is discovered or by the exercise of reasonable diligence should
have been discovered.” Ohio Rev. Code § 1333.66.  On appeal, the court also found substantial factual dispute – making this an issue not appropriate for dismissal on the pleadings.

Defendants ask us to infer, from the complaint itself, that Plaintiffs should have begun investigating in 2009 and that, had they done so, they would have discovered the application leading to the ’586 patent as of its publication
date eighteen months later. Defendants argue that the only reasonable inference to be drawn is against Plaintiffs. We disagree. Plaintiffs might have assumed Goodyear lost interest in the technology, given its previous failed investment. Or they might have thought that Goodyear would honor the nondisclosure agreement.

On remand, the court must allow this issue to proceed past the pleadings stage.