First of all — holy decimal! VersaTop owns the registered trademark “2.0” as it relates to the company’s portable trade show display booths and stages.

VersaTop sued its competitor Georgia Expo for its use of the “2.0” mark along with a longer version “PIPE & DRAPE 2.0.” These companies compete in the “pipe & drape” market, and so the only unique or distinctive part of the mark is the “2.0.”  In my mind, this is like claiming ownership of “Internet Services 2.0” or “House Building 2.0.”  Rights are possible, but I’d want some clear proof of distinctiveness.

I’ll note here that the registration application was filed back in October 2015.  Two days later VersaTop filed the infringement lawsuit asserting rights to the unregistered marks.

What appears to have happened here is that VersaTop created a new connector that it called Pipe & Drape 2.0. The new approach was popular and Georgia Expo (allegedly) copied the design and also used the same name.  At the time, there was no generic name for this new style and so Georgia Expo free-rode on the familiarity already created by VersaTop.  See Georgia Expo’s brochures below that includes both the “PIPE & DRAPE 2.0” words and also – it turns out – photos of the VersaTop product being passed-off as those of Georgia Expo. 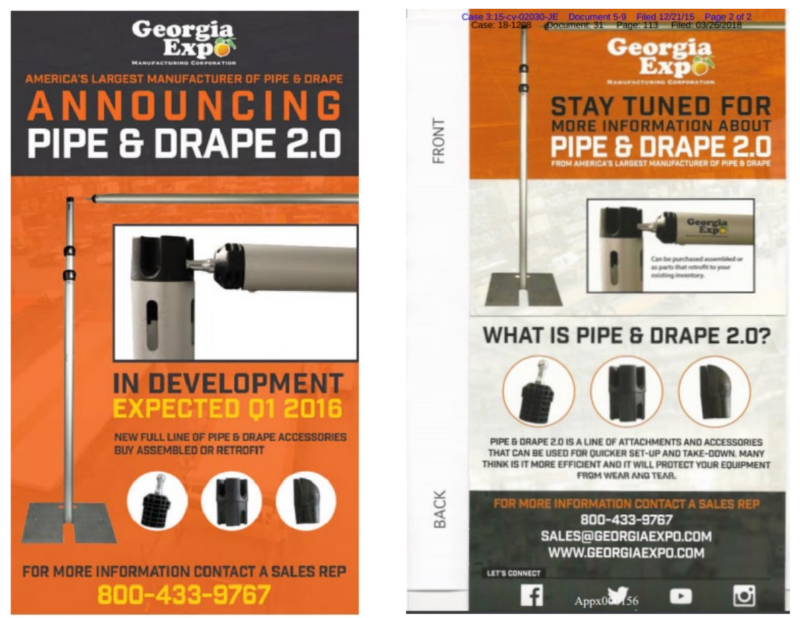 The district court dismissed the case on summary judgment — although not because an unregistered 2.0 is such a weak mark. Rather, the court came-up with a funky determination of no infringement because the marks were not “affixed” to goods “sold or transported in commerce.”   Rather, the marks were on distributed brochures for an up-and-coming product.

The district court in this case incorrectly applied the definition of “use in commerce” that is included in the statute for purposes of trademark registration. This definition does not apply to trademark infringement.

Rather, the Federal Circuit held that – for infringement – a commercial purpose leading to a likelihood of confusion is going to be sufficient.  Here, the defendant “admitted that it used VersaTop’s marks in its advertising and brochures, and that the parties ‘compete directly’ in the drape and rod industry.”  That was sufficient for an infringement finding.

To be clear, rather than simply vacating the non-infringement summary-judgment, the court reversed and issued a judgment of infringement in favor of VersaTop.

Circling back to my prior comments regarding the weakness of the mark – according to the Federal Circuit, Georgia Expo appears not to have challenged its validity or enforceability.