Reese v. Spring Nextel (Fed. Cir. 2019). Mr. Reese’s patent claims a “method for sending a call waiting tone . . .” U.S. Patent No. 6,868,150. The problem for Reese is that the asserted claims are drafted in substantially functional form without reciting the particular technological solution.  The court explains:

The claims are directed to the abstract idea of receiving information (a calling phone number flagged as private) and sending an indication (an audible tone) to a party already engaged in a call. The claims do not recite any particular method of receiving the information and sending the indicating tone in response. . . . Although Reese argues that the claims require specific telephone features, merely limiting claims to a particular technological environment does not render the claims any
less abstract. . . .

[Regarding step two:] [B]y the ’150 patent’s own terms, the claims do not recite any non-conventional equipment.  Further, the claims recite functional language lacking “any requirements for how the desired result is achieved.” Elec. Power Grp. Nothing in the claims requires anything other than conventional telephone network equipment to perform the generic functions of receiving and sending information. Reciting an abstract idea and applying it on telephone network equipment is not enough for patent eligibility. Accordingly,
the claims do not contain an inventive concept.

In re Greenstein (Fed. Cir. 2019) involves a “method for allocation of investment returns” when a single asset is collaboratively owned.  The key step in the invention appears to involve using a “computer to assign an investment return to the investor.”  According to the inventor, the beneficial focus of the invention is to be able to allocate risk between parties without having to actually buy or sell any additional securities.

On appeal, the Federal Circuit agreed with the USPTO that Greenstein’s claims are directed to ineligible subject matter.

[T]he claims are directed to the abstract idea of allocating returns to different investors in an investment fund, a fundamental business practice that long predates computer technology.  Claim 1 involves storing information about each investor in a database, changing the investment returns assigned to at least two of them, and using the computer to keep track of the transfers between investors in the fund. This is simply the “automation of the fundamental economic concept,” OIP
Techs., of allocating investment returns to different investors within a common investment fund. We have long held that such basic management of business information is an abstract idea. As a result, we conclude that the Board correctly held that the claims are directed to the abstract idea of allocating returns in an investment fund.

Nor do the claims recite any further inventive concept. The claims only invoke a computer as a generic tool to store information and record transactions; in times past, these activities could have been performed with pen and paper. As the PTO points out, Alice clearly held that “mere recitation of a generic computer cannot transform a patent-ineligible abstract idea into a patent-eligible invention.” 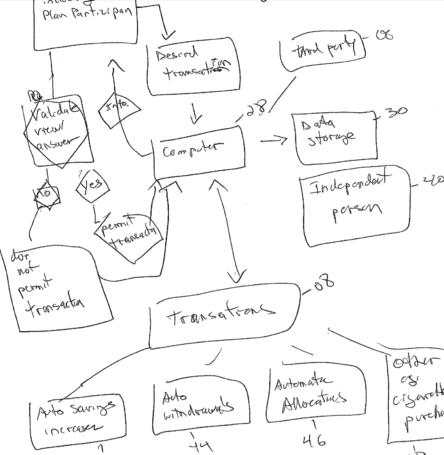 47 thoughts on “Easy Ineligibility Decisions for the Court”