We recently launched an updated version of the Compendium of Federal Circuit Decisions that contains information on decisions posted to the Federal Circuit’s website for all origins, not just appeals arising from the USPTO and District Courts (although the richest data is still for appeals from those sources).  Data is current through June 28, 2019.

For those who aren’t familiar with the Compendium, it’s a database designed specifically to support quantitative empirical research about the Federal Circuit’s decisions.  We’ve coded an array of basic information about Federal Circuit decisions to make it as easy as possible for anyone to do their own empirical studies.  There’s data on document type to panel judges to authorship information and more.  We’re constantly working on adding new types of data, so if there’s something specific that you’d like empirical data on, just let me know.

Below are a few basic highlights through the first six months of 2019.  As always, the usual disclaimers when working with quantitative data about court decisions apply.  Large-scale quantitative overviews only provide one perspective into judicial decisions and are subject to various selective forces that are described in various sources including this one. 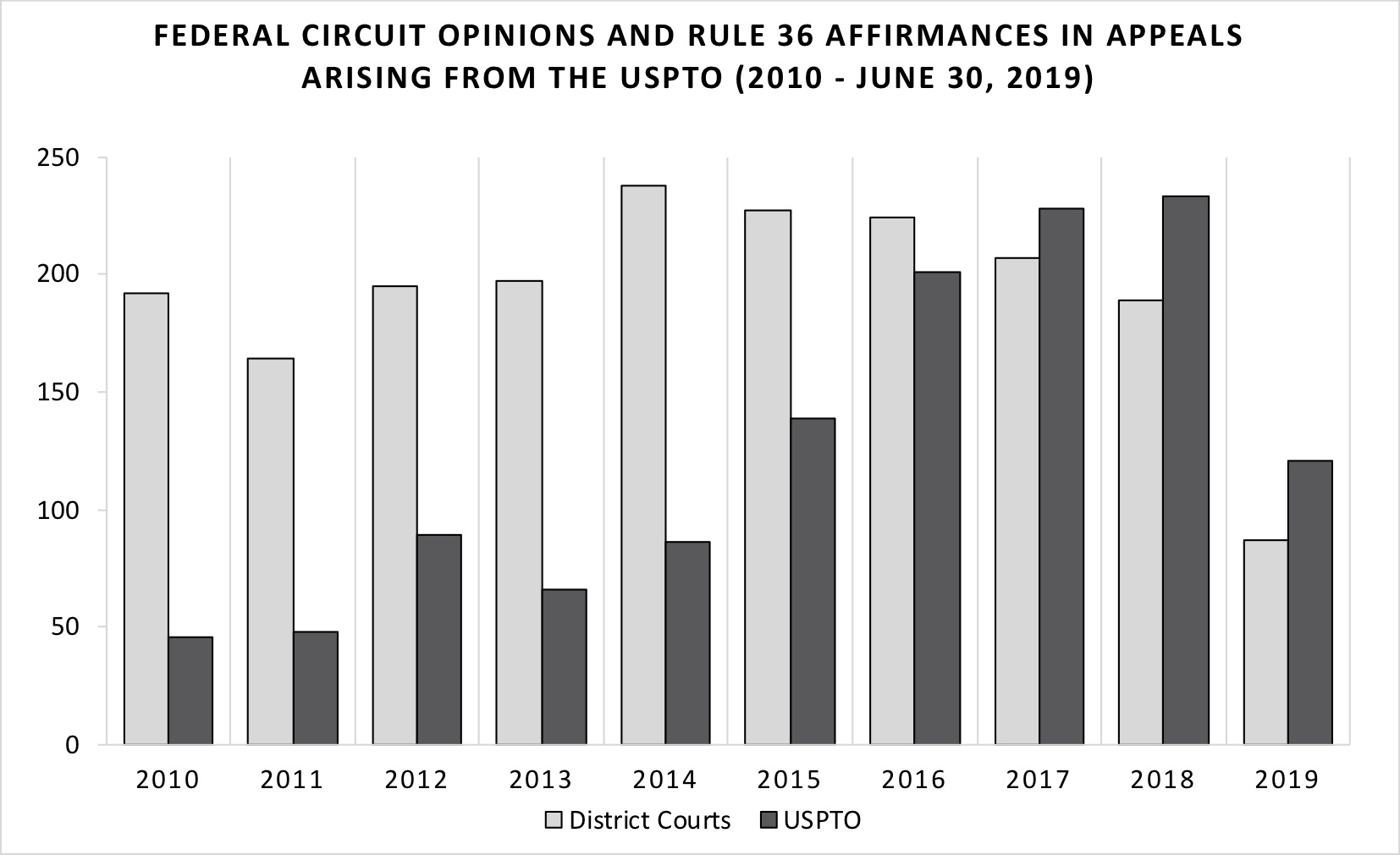 Keep in mind that the Federal Circuit’s output of decisions is dependent on appeals, and appeals form both sources have shown a slight decline from peaks in 2015 (docketed appeals from district courts) and 2016 (docketed appeals from the USPTO).   The next chart shows data from the Federal Circuit’s monthly reports (not the Compendium) about appeals docketed.  While the number of appeals arising from the USPTO will likely go up this year, the number of appeals arising from the district courts is likely to continue declining (consistent with a decline in the number of patent cases filed over the last few years). 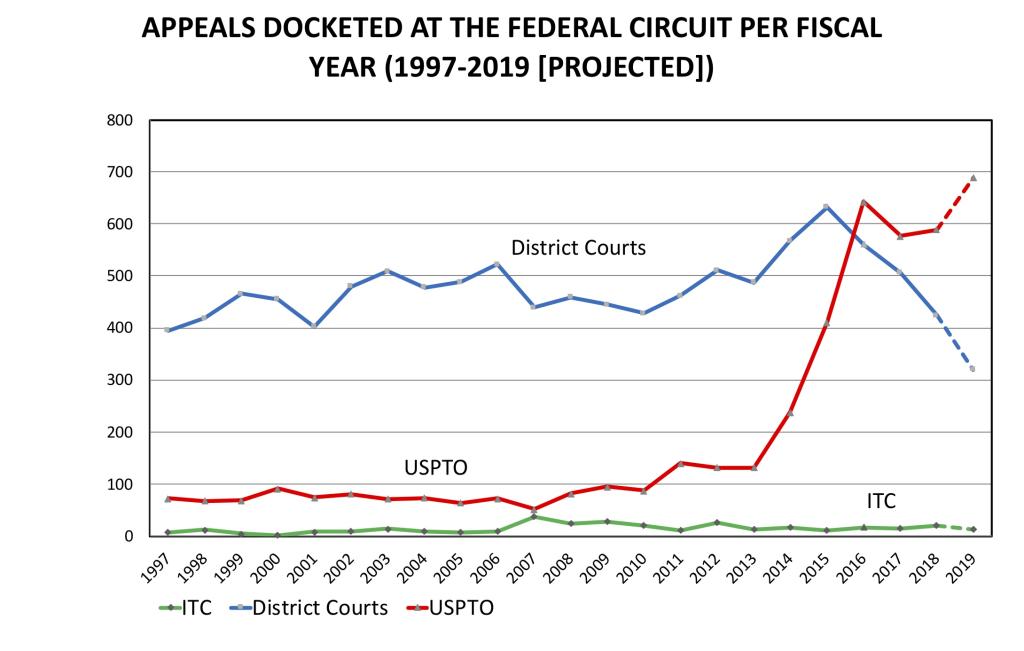 I have a chart that shows how many appeals arise from the PTAB versus the TTAB, but it’s not very interesting because the vast majority of appeals every year come from the PTAB (these days, by an order of magnitude).  A bit more interesting is the below chart, which shows Federal Circuit decisions by dispute type in appeals arising from the USPTO.  Consistent with conventional wisdom, most of these involve appeals from inter partes review proceedings, although there was a bump in appeals from rejections of patent applications last year. 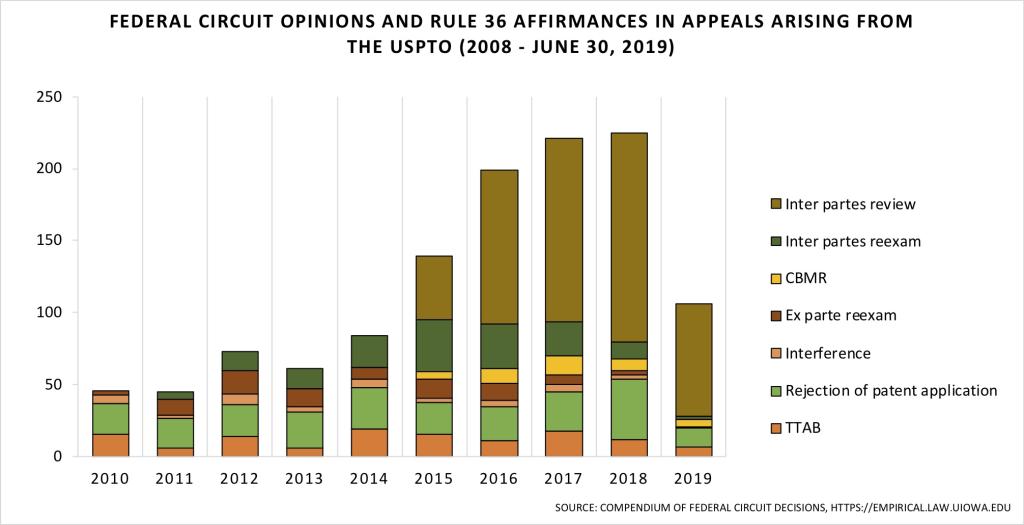 Not shown are a handful of miscellaneous types, such as two appeals from post-grant review proceedings in 2018. 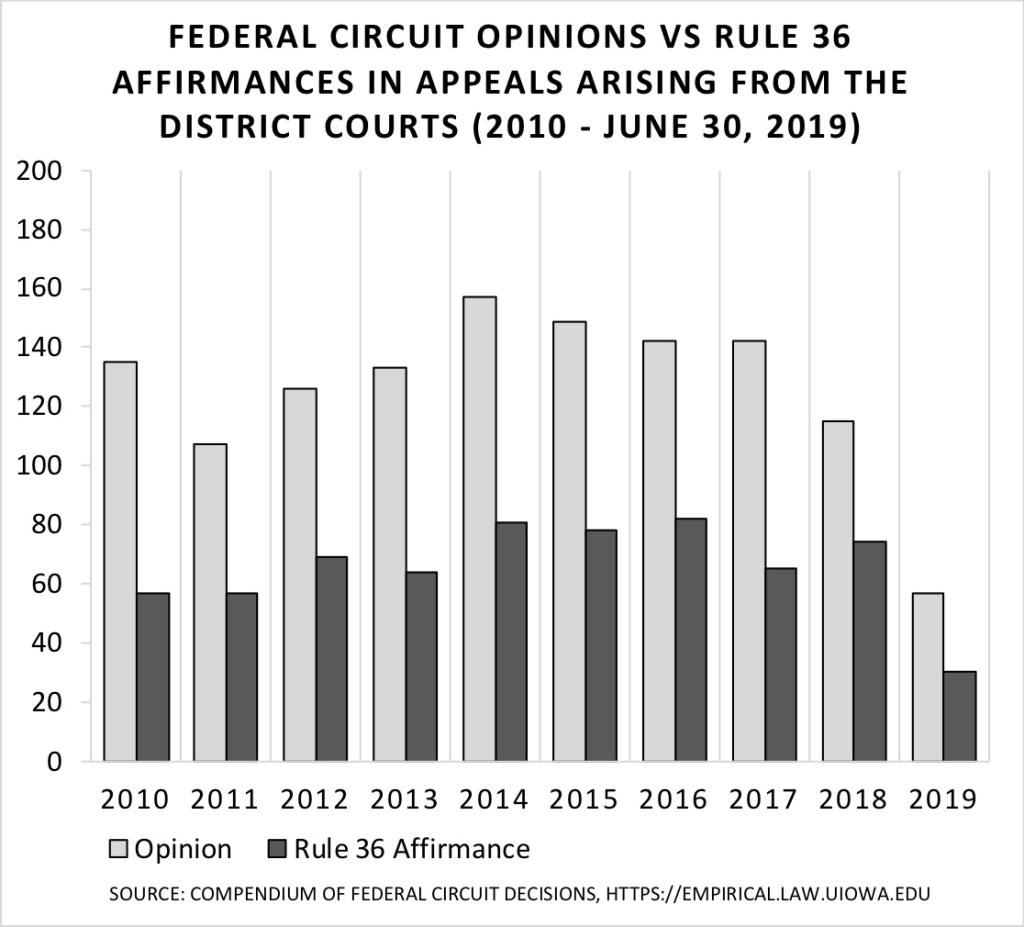 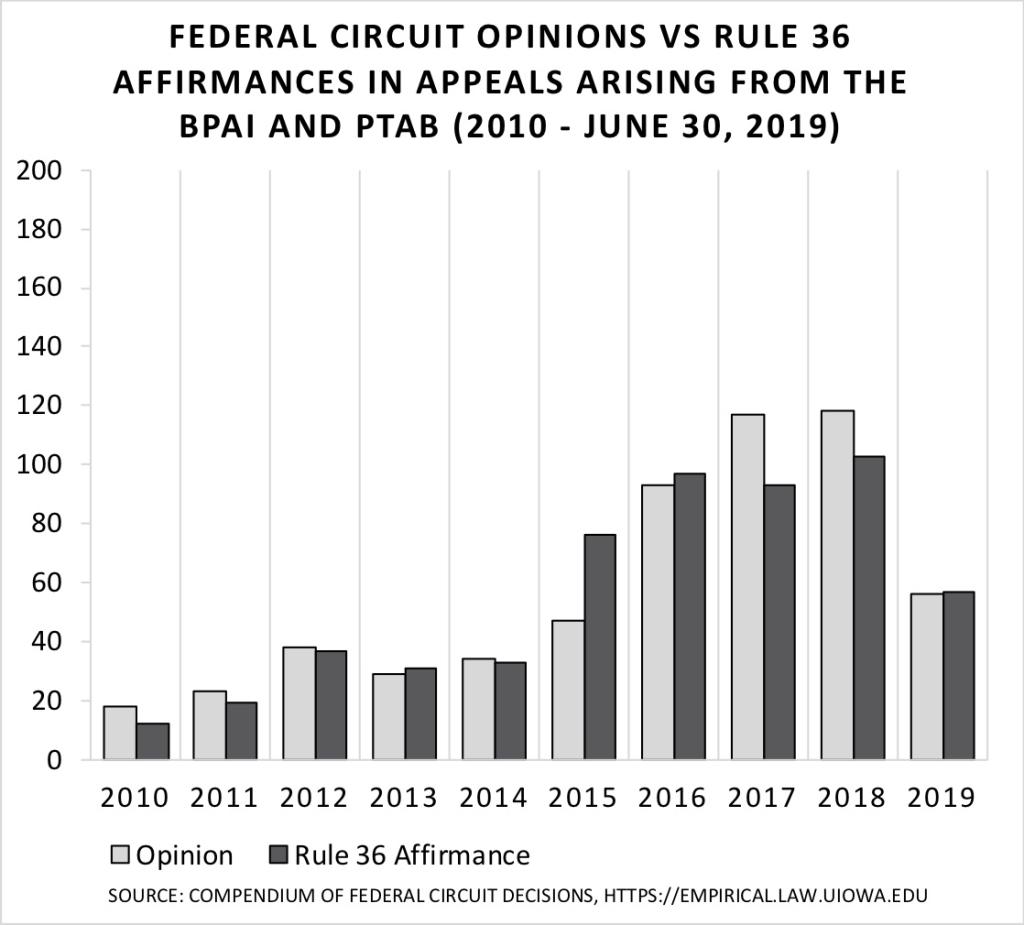 The Federal Circuit’s opinions arising from the district courts tend to be designated precedential more often than decisions from the USPTO, although the raw numbers of precedential opinions are getting closer. 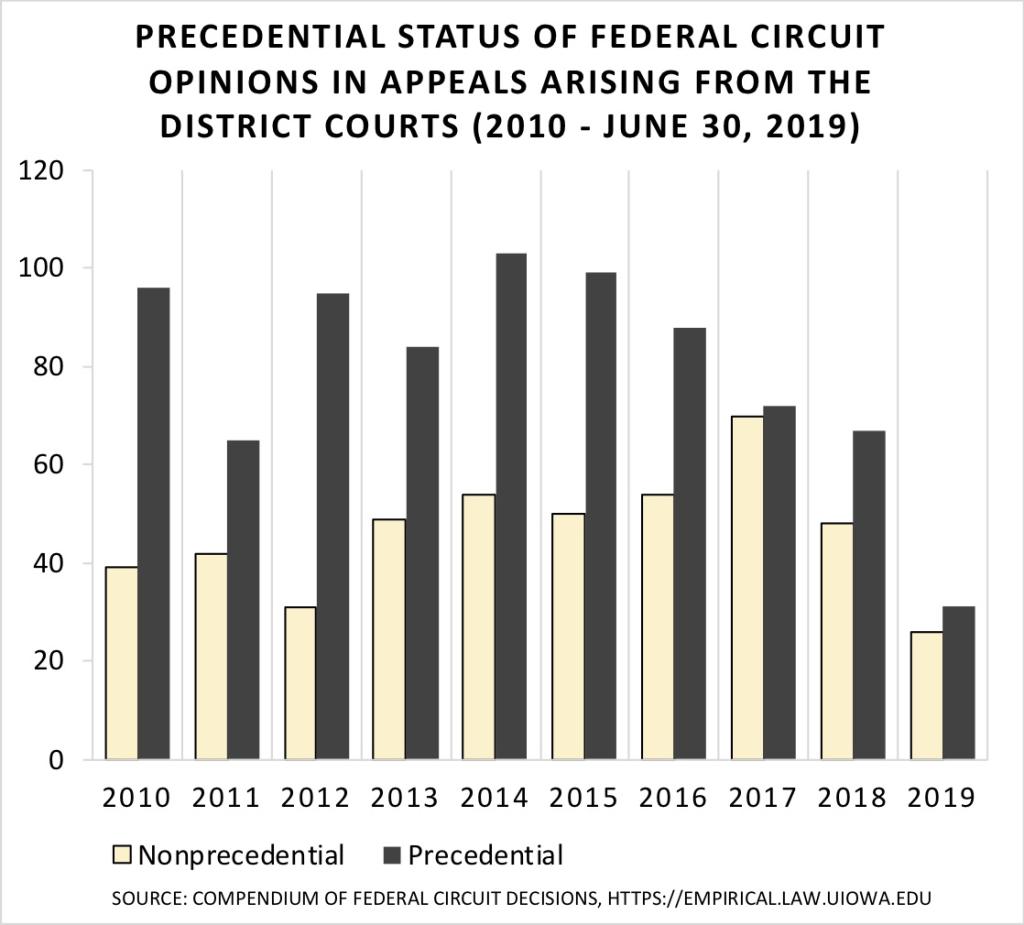 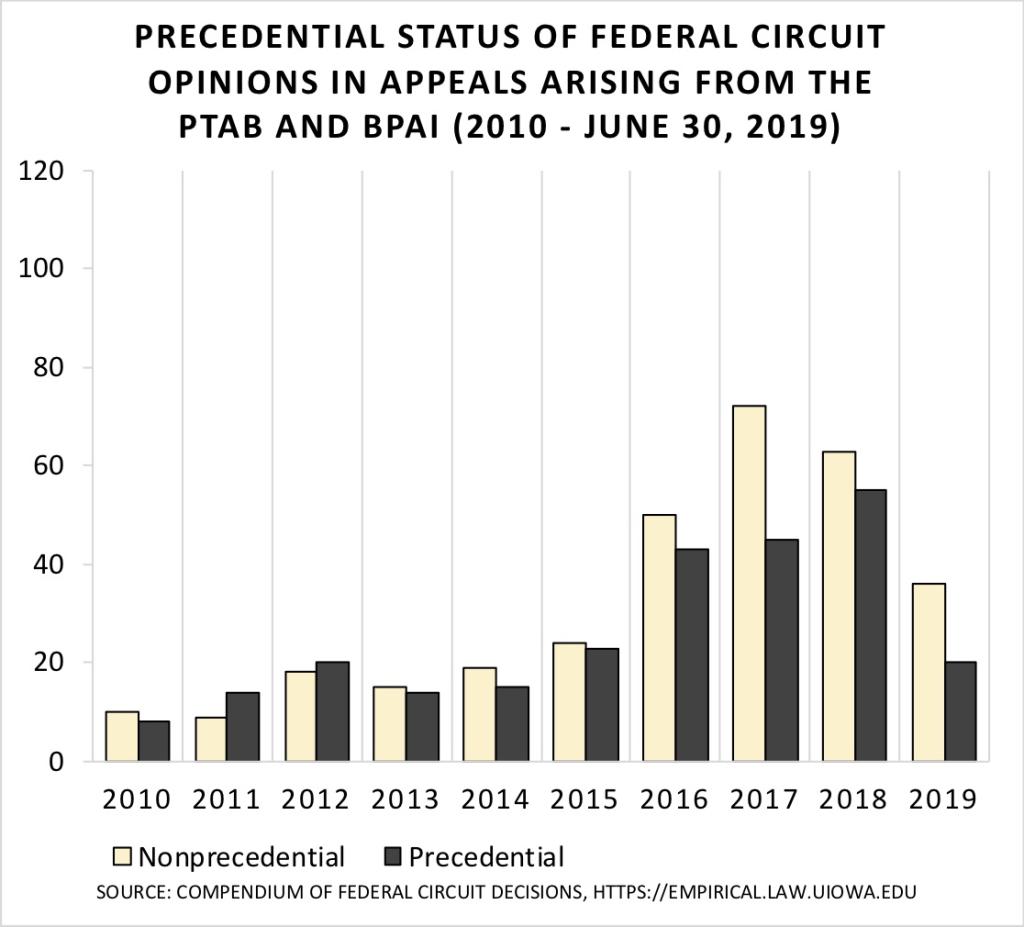 The below chart shows the outcomes of appeals from inter partes review proceedings.  Since 2016, the court’s affirmance rate of these decisions  has remained around 70% (affirmance-in-full) and 80% (including affirmances-in-part).  While selection effects are still important to consider here, keep in mind that these decisions represent a substantial portion of all completed inter partes review proceedings, so there’s less selection taking place between the USPTO’s determination and the Federal Circuit’s decision than in other forms of appeal. Edit: District court decisions likely have a similar high frequency of appeal characteristic; this is more of an observation relative to appeals generally. 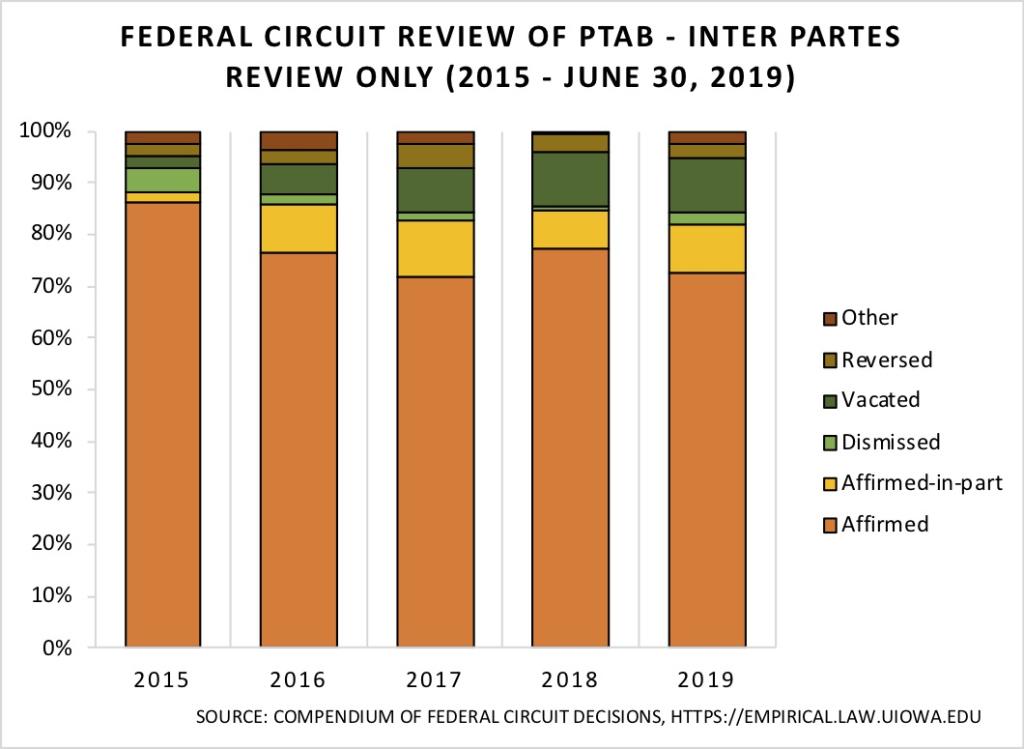 We haven’t yet completed outcome-coding of all the decisions arising from the district courts, so comparative data isn’t available yet. (Soon, hopefully!)

Want the data analyzed in a different way?

You’re welcome to play around with the data on your own.  If you do use it for something that you publish, please include a citation to the Compendium.  There’s a convenient cite form on the landing page for the database.

Thanks to my research assistants for their work on the Compendium, especially John Miscevich, Joseph Bauer and Lucas Perlman.

19 thoughts on “Update from the Compendium of Federal Circuit Decisions”