In a rare split decision, the PTAB upheld the patentability of Polygroup’s U.S. Patent No. 8,974,072 (2-1 decision).  On appeal, however, the Federal Circuit has vacated that decision with an oddly written double-negative conclusion: “substantial evidence does not support the Board’s finding that Polygroup failed to establish a rationale to combine the prior art.” 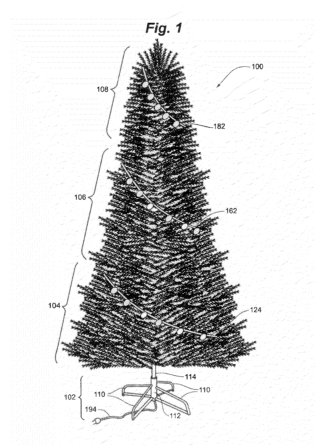 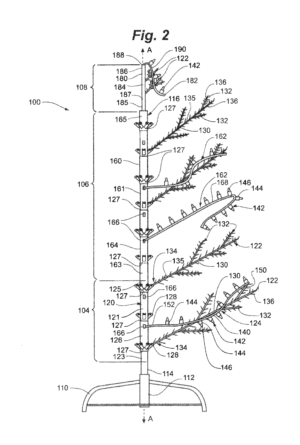 This case is part of ongoing litigation between these makers of pre-lit artificial trees. The appeal here was already pending when the Federal Circuit decided a separate set of IPR appeals – holding that the PTAB had been unduly narrow in its claim construction on the claim term “tree portion” and had also failed to address a single-reference obviousness argument.  [prior decision] The patent at issue here is a child of that at issue in the prior case. On appeal here, those same issues were raised and – in a conclusory statement – the appellate panel found them resolved for the child as a matter of collateral estoppel (issue preclusion):

[B]ecause we have already decided [these issues] in Polygroup’s favor in a previous appeal concerning U.S. Patent No. 8,454,186, a parent of the ’072 patent, [these arguments have] been resolved against Willis as a matter of collateral estoppel.

The court here does not explain its view of whether claim construction associated with a parent patent always decides the issue for a child patent.  In the case, we apparently had a lack of good briefing.  Apparently neither party provided supplemental authority to this panel regarding the intervening decision, and the court provided a little chastising footnote:

Although Polygroup notified us that it anticipated an earlier decision … would control the “tree portion” construction issue in this appeal, see Appellant’s Br. 1, we expected more. Pertinent and significant authority came to the parties’ attention after the briefing in this appeal concluded, yet both parties failed to notify the Panel about this occurrence. Rule 28(j) contemplates the submission of such supplemental authority. Fed. R. App. P. 28(j).

To be clear, 28(j) does not require supplemental submissions, but only states that “a party may promptly advise” the court of “pertinent and significant authorities” identified after briefing or oral arguments. At oral arguments, the Judges went further to state that the failure to submit supplemental authority “is no small matter; its your duty to ensure to ensure to the best you can, that the court doesn’t go down blind alleys.” “Both [counsel] had an obligation to advise us of these cases.”  The court’s upset here is a bit odd since the parties had designated these cases as related and one of the judges (Judge Dyk) was on both sets of panels.

Regarding the actual underlying obviousness decision: The big question was whether someone of skill in the art would alter “snap-fitting” electrical connectors with the claimed tapered compression-fitted electrical connectors. In its decision, the Board found that these were not known alternatives.  On appeal, the Federal Circuit vacated that conclusion — finding that the board made several errors in its reasoning that were not supported by substantial evidence. On that portion, I’ll just say that it appears to be a poorly written decision.