This is an important case for anyone arguing secondary indicia — not a good case for patent holders. The court here again raised the “nexus” hurdle by holding that a presumption of nexus can only be achieved by proving that the product being sold by the patentee is “essentially the claimed invention.”  This is a situation where SRAM owned two patents in the same patent family — both of which covered aspects of its X-Sync bicycle chainring (gear).  Each patent included elements not claimed in the other — for the court that was enough evidence to disprove coexistence. 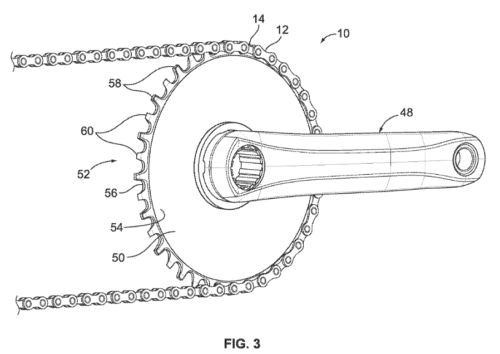 In its IPR Final Written Decision, the PTAB sided with the patentee SRAM — finding the claims not-proven-obvious.  U.S. Patent No. 9,182,027 (Claims 1-6 and 13-19). The prior art apparently taught all of the claimed elements as well as a motivation to combine the references.  However, the Board found that the commercial success of SRAM’s product tilted the balance toward non-obviousnessness.

On appeal, the Federal Circuit has vacated and remanded — holding that the Board improperly “presumed nexus between the evidence of secondary considerations and the independent claims.”

Obviousness: The bulk of the obviousness analysis is focused on more direct evidence of obviousness — looking at importance of differences between the claimed invention and the prior art. However, circumstantial “secondary considerations” are also available to a patentee to help justify patentability.  The court has ruled, for instance, that a commercially successful product is likely to embody a non-obvious innovation.

A key stumbling block for many patentees is the required “nexus” between the claimed invention and the secondary factor:

In order to accord substantial weight to secondary considerations in an obviousness analysis, “the evidence of secondary considerations must have a ‘nexus’ to the claims, i.e., there must be ‘a legally and factually sufficient connection’ between the evidence and the patented invention.” Henny Penny Corp. v. Frymaster LLC, 938 F.3d 1324 (Fed. Cir. 2019) (quoting Demaco Corp. v. F. Von Langsdorff Licensing Ltd., 851 F.2d 1387 (Fed. Cir. 1988)).

Unclaimed Features: SRAM’s chainring product includes a number of unclaimed features. The Board found the extra-elements no-problem for the nexus presumption — holding that co-extensiveness  is met so long as the claims broadly cover the product (and are not just a component of the product).  On appeal, the Federal Circuit found that coextensiveness is more particular than that:

Although we do not require the patentee to prove perfect correspondence to meet the coextensiveness requirement, what we do require is that the patentee demonstrate that the product is essentially the claimed invention.

Thus, the words of the newly enhanced requirement is that the product being sold must be “essentially the claimed invention.” The court provided two paragraphs attempting to explain its new definition:

To be sure, we have never held that the existence of one or more unclaimed features, standing alone, means nexus may not be presumed. Indeed, there is rarely a perfect correspondence between the claimed invention and the product. As we explained, the purpose of the coextensiveness requirement is to ensure that nexus is only presumed when the product tied to the evidence of secondary considerations “is the invention disclosed and claimed.” Demaco. Thus, if the unclaimed features amount to nothing more than additional insignificant features, presuming nexus may nevertheless be appropriate.

Although the court here repeatedly cites to Demaco — whose relevant part states in full:

Multiple Patents and Coexistence: The SRAM chainrings are also covered by a separate patent – U.S. Patent 9,291,250.  The ‘250 patent is a continuation of the ‘027 patent and particularly claim “>80% gap filling” — something not claimed in the ‘027 patent at issue in this case.  Despite being a continuation, the Federal Circuit found that the ‘027 patent covers a different invention — “these patents cover different combinations of chainring features. . . . [And] The same evidence of secondary considerations cannot be presumed to be attributable to two different combinations of features.” The existence of this separate patented invention covering the product proved to the court that the product was not coexistent with the first patent. The court went on to explain that even seeking patent protection on a different combination than that eventually claimed is “probative” of no coexistence.

On remand, SRAM cannot rely upon the presumption of nexus because of the lack of coexistence.  However, the patentee may still be able to rely upon secondary considerations, but to do so must prove that “the evidence of secondary considerations is attributable to the claimed combination of wide and narrow teeth with inboard or outboard offset teeth, as opposed to, for example, prior art features in isolation or unclaimed features.”

I’ll note here that SRAM cited to a number of cases where a nexus was found even though the patentee’s product embodied claims from two or more different patents.  The Federal Circuit distinguished those — holding that either (1) the case did not expressly consider the presumption of nexus or (2) that the patents in question covered essentially the same invention. In my view, the court’s reading of the cases appears suspect.

I looked at its first case cited – WBIP, LLC v. Kohler Co., 829 F.3d 1317, 1324–25 (Fed. Cir. 2016), which the Fox Factory court characterizes as “presuming nexus between a product and the asserted claims of two related patents where the patents covered essentially the same invention, and the court identified a single claim as representative of both patents.” The WBIP court actually explained things a bit differently:

A limited exception to the presumption of nexus exists where the patented invention is only a component of the product to which the asserted objective considerations are tied. Demaco Corp. v. F. Von Langsdorff Licensing Ltd., 851 F.2d 1387, 1392 (Fed. Cir. 1988). Kohler does not argue that this exception applies in this case, nor could it. The asserted claims are drawn to a “marine engine” (‘044 patent claims 1–6, 8, 10–11) or to a “method of controlling emissions from an internal combustion engine configured for marine application” (‘044 patent claim 12 and ‘196 patent claims 26 and 28). The Westerbeke and Kohler low–carbon monoxide gen-sets are the identical type of device, marine engines, as that of the asserted claims and practice the claimed methods in order to control their emissions.

The claims of the two patents are also quite different. With claim 26 of the ‘196 patent claiming several features not found in claim 1 of the ‘044 patent, including “driving an electric generator;” A catalyst “configured to simultaneously reduce oxides of nitrogen, carbon monoxide and hydrocarbons;” and using “electronic fuel injection” to control the air/fuel ratio. Although I will not review the claims of the other cases cited on this point, I’m unfortunately expecting that the court here also misread those cases.

64 thoughts on “Nexus: Product must be “Essentially the Claimed Invention””