Hafco’s US Design Patent D681,684 covers an ornamental design for a “Rock Dust Blower.” GMS was Hafco’s distributor. After a breakup GMS started selling its own version. 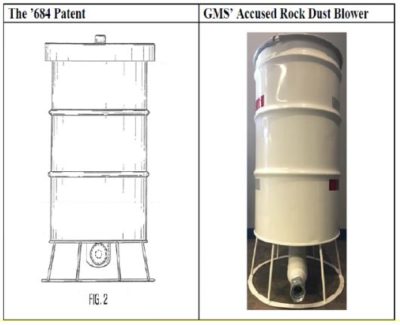 The jury awarded a verdict of $123k and the district court issued a permanent injunction. However, in a post verdict ruling, the district court remitted the damages award to zero and ordered a new trial on damages.  The court also denied GMS’s motion for judgment as a matter of law (JMOL) on non-infringement and GMS appealed.

The basic question in the appeal is the extent that functional elements of the design can be protected by design patent.  Unlike copyright, design patent law does not have a statutory requirement that ornamental features of a design be separable from the functional elements.  I have never used a “rock dust blower”, but nothing in the design shown above appears purely decorative.  At the same time, I can imagine many ways to make a fully functional and relatively inexpensive “rock dust blower” that use different design features than those drawn by the patentee here.  Unfortunately, during the trial (or pre-trial) GMS never pointed to (or provided evidence on) the particular functional aspects of the design here that should have been excluded. As such, the Federal Circuit found the issue waived

Because GMS never made this non-infringement argument at the district court, nor presented relevant evidence on the functional or prior art aspects of the ‘684 patent to the jury, GMS has not preserved the argument for appeal.

Jury Instructions – Functionality:  A jury is supposed to be instructed on the law.  Here, GMS asked for a jury instruction that “a design patent protects only the non-functional aspects of the design as shown in the patent drawings, if there are any such nonfunctional aspects.”  The did not use GMS’s proposal and GMS did not subsequently object to the Jury Instructions provided by the court. That lack of second-round objections to jury instructions is required under FRCP 51(d)(1) unless the instructions fall under the “plain error” exception of FRCP 51(d)(2).

(2) Plain Error. A court may consider a plain error in the instructions that has not been preserved as required by Rule 51(d)(1) if the error affects substantial rights.

On appeal, the Federal Circuit found no “plain error” and in fact no error at all.  The court particularly walked through and approved the following jury instructions:

An ordinary observer is a person who buys and uses the product at issue.

The appellate panel found no error with this instruction.

Differences from the Prior Art:  Under Egyptian Goddess, the infringement test compares the design patent images with with the accused product while keeping the prior art in-mind.  Here, for instance, the 55 gallon drum used in the patent is at least prior art.

The jury was not properly instructed to “familiarize yourself with each of the prior art designs that have been brought to your attention.” Rather, the court simply asked the jury to compare the design patent to the accused product:

You must only compare GMS’ accused rock dust blower to the ’684 design patent when making your decision regarding infringement.

On appeal, the Federal Circuit confirmed that this is a special case since the accused infringer – GMS – did not present any prior art for comparison. “Given that there was no prior art introduced at trial, no attempt by GMS to introduce the prior art, and no proposed jury instruction on this issue, the purported exclusion of this instruction cannot be error.”

Affirmed.  In hindsight, this case looks like a failure of lawyering by the defendant.  However, part of the issue here is that we were talking about only $100,000 and the level of lawyering required for a strong appellate case costs more than that.  In addition we have a situation where it sure looks like the defendant intentionally made a knock-off product.

Crouch’s Advice: If you are going to litigate a design patent, hire someone who has previously litigated a design patent (even though there are not that many folks).  If you already have litigation counsel that you trust, have them bring in an additional design patent litigator (likely from another firm) to add to the team. The difficulty here is that design patent law is different enough to get folks in deep trouble who assume they understand the process.

Damages: Dissent by Judge Newman concurred with the opinion discussed above but also added her own opinion resolving the question of damages that was apparently not appealed. The jury verdict (image below) shows damages of $123k and were measured by GMS’s infringing sales under a profit disgorgement theory.  The problem though is that Hafco eventually elected to pursue damages based upon its own lost profits rather than profit disgorgement.  Clear error there by the jury and so it looks like it should require a new trial unless remittur works.

Remittur: When the jury verdict size cannot be supported by the evidence presented, the court may order a new trial (as here) under R.59.  In addition, the court can also offer the plaintiff the option to accept a lesser amount of damages – an amount that is supported by the evidence. This option is a remittur.  Here, the judge offered the Hafco a remittur of $0 in damages, which Hafco rejected in favor of a new trial.  In her dissent, Judge Newman suggested that the proper amount for Remittur would be $110,000 which (according to her) was the patentee’s undisputed lost profits.

Hafco suggests that remittitur to Hafco’s lost profits of $110,000 would be a more reasonable action than remittitur to zero, for $110,000 reasonably implements the jury’s verdict and intent. . . .

I would simply correct the district court’s judgment, and remit the damages award to the undisputed amount of $110,000. A new trial, on undisputed facts, is not needed to serve the purposes of the jury verdict.

Dissent.  On remand, the court may take Judge Newman’s arguments to heart and reconsider the new trial with a R.60(b) order. 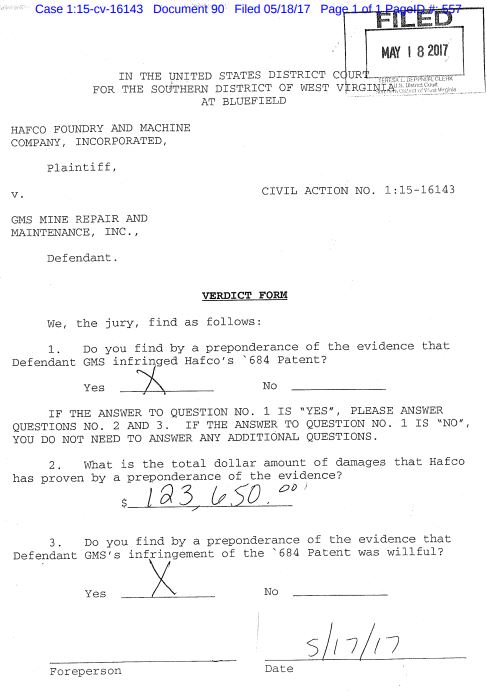 I also want to just note for a second that the lids here appear to have major differences in design. 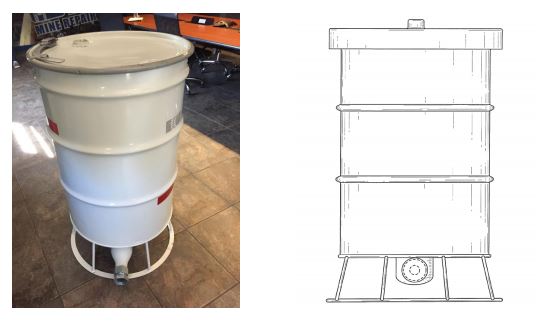