I have not played golf in a decade, and I had assumed that the rest of the world was following suit.  Apparently though there is still some money in the game.  When I played, I had a crazy slice.  Back then, I thought it was me.  But, it looks like Saso found a solution with some subtle shifting of the club head weighting. Basically, Saso redesigned the clubs so that more weight was on the heel-side of the club rather than the toe-side.  This means that the toe end of the club is less likely to twist during a swing. The image below shows the result.

During prosecution, the patent examiner rejected broadest claims directed toward shifting the weight because they were clearly anticipated.  At that point, Saso altered the claims to focus on re-shaping of the head of a “metallic wood type” club such as a driver. The annotated figure below shows how the heal-side has a bulge (12) and the toe-side has been shaved-down (11). 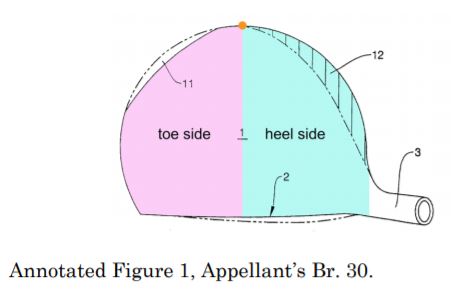 13 year of litigation involving 1 golf head patent. Saso sued Nike for patent infringement back in 2008.  It is a simple case and so I don’t have a good understanding of why it is still pending 13 years later, but the N.D. Ill. docket indicates that the case was originally assigned to Judge Blanch Manning who pushed it down to Magistrate Judge Nan Nolan.  In 2010, Judge Manning withdrew Judge Nolan from the case and the case was also transferred to Senior Judge Harry Lienenweber who issued an opinion in 2010 finding the claims “not indefinite.”  In 2011 the case was reassigned to Judge Edmond Chang soon after he joined the bench. In 2013, the case was then reassigned to Judge Andrea Wood soon after she joined the bench. By that point, no depositions had taken place and there was pretrial schedule. The docket shows no substantive entries from 2014 – 2019.  Then in November 2019, Judge Wood entered a decision finding claim 7 “too indefinite to be valid.”  That indefiniteness decision was apparently based upon a motion filed by the defendant back in 2013.

Indefiniteness: The statute requires “one or more claims particularly pointing out and distinctly claiming the subject matter which the inventor or a joint inventor regards as the invention.” 35 U.S.C. 112(b).  A claim that fails this provision is deemed indefinite and thus invalid.  In Nautilus, the Supreme Court set the standard for indefiniteness as reasonable certainty as to the scope.   Patent claims are indefinite if they “fail to inform, with reasonable certainty, those skilled in the art about the scope of the invention.” Nautilus, Inc. v. Biosig Instruments, Inc., 572 U.S. 898 (2014).  In general, the Federal Circuit sees definiteness as an extension of claim construction — and thus is for the judge to decide.  However, the issue may involve underlying factual questions — such as the understanding of someone skilled in the art.

The problem is that the patent does not expressly define what part is “the toe” and “the heel.” Do we know with reasonable certainty what the claim covers?  The district court said no: “With nothing suggesting where the toe side and heel side end points are located, it is not clear from where on each surface one measures to the most rearwardly point to determine the radii of curvature.”

In its opinion, the district court made the conclusion that a skilled artisan would not inherently know the boundaries of the toe and heel — “it is not clear from where on each surface one measures.” On appeal, the Federal Circuit first determined that this conclusion was a factual-finding by the district court (even though it was not properly labelled as such as required by the rules of procedure).  As a factual finding, it is due deference on appeal, and the appellate panel found no clear error. The court pointed to expert testimony that “‘toe’ and ‘heel’ are general terms” and do not define a particular point on the club. Because those elements lacked precision, the appellate panel agreed that the claim as a whole failed.

Because an artisan would not already know the bounds of the toe and heel of a golf club, and because the patent provides no guidance, we hold that claim 7 is indefinite.

If you wanted to draft a claim regarding the shape of the head disclosed in Figure 1 — using only the disclosure from Figure 1 — could you do it?

The patentee also asked for a jury trial on the underlying factual issues leading to an invalidity conclusion. That was rejected based upon  See Markman v. Westview Instruments, Inc., 517 U.S. 370 (1996).  Of course, Markman is about claim construction and not indefiniteness.

Normally, the evidentiary requirement for factual findings supporting invalidity must be based upon clear and convincing evidence.  Microsoft Corp. v. i4i Ltd. Partnership, 564 U.S. 91 (2011) (“§282 requires an invalidity defense to be
proved by clear and convincing evidence.”).   Subsequently in Nautilus (2014), the court avoiding the issue as it relates to indefiniteness.  The court wrote:

The parties … dispute whether factual findings subsidiary to the ultimate issue of definiteness trigger the clear-and-convincing-evidence standard and, relatedly, whether deference is due to the PTO’s resolution of disputed issues of fact. We leave these questions for another day.

Nautilus at F.N.10.  In this case, the district court did not indicate the standard that she applied for making the factual finding and neither did the the appellate panel.