Symbiont’s US Patent No. 9,446,094 covers a method of extruding corn into a resulting “hydrophilic, low-vitreous, gelatinous feedstuff” that is fed to dairy cattle. Apparently this process leads to increased digestion of the starch content.  The inventor Mark Holt is also owner of Symbiont. Holt was part of forming two additional companies, BJM and Matrix and Symbiont licensed the technology (including the patent) to those companies.  The agreement included a number of provisions — primarily a license with royalties for feed sold using the process. 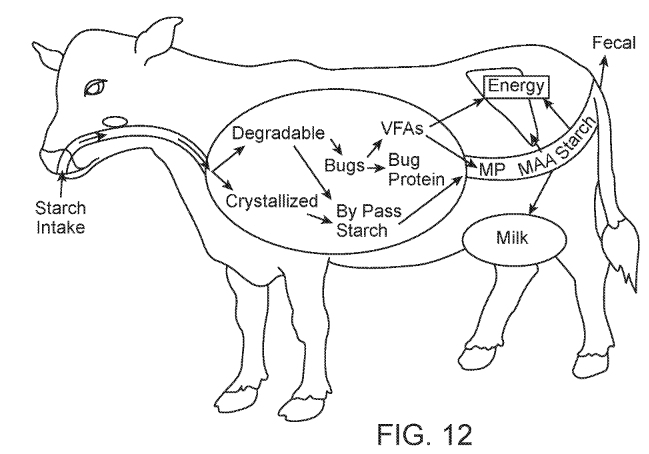 Things fell apart in 2019 with Matrix dissolving and BJM terminating its license.  BJM then began to work with another company (Garner) to manufacture feed products.  The resulting lawsuit in Arizona state court alleged: (1) breach of NDA; (2) conversion of “assets, monies, and intellectual property”; and (3) breach of fiduciary duty.

The district court issued a preliminary injunction prohibiting BJM from selling its feed product using the ‘094 patent or from soliciting other to do the same.  On appeal though, the Arizona Court of Appeals has vacated and remanded–holding that the district court erred by presuming irreparable harm due to patent infringement.  The appellate court noted the change in law under eBay, but also went on to explain that  Arizona Law “does not presume irreparable harm.”  On remand, the district court will need to decide whether the potential ongoing infringement causes any harm to the patentee that cannot be remedied by damages alone.

The appellate court also addressed the question of jurisdiction.  All cases “arising under” the U.S. patent laws are subject to exclusive jurisdiction of the Federal Court system. Here, however, the lawsuit asserts only state law claims of breach & conversion.  Applying Gunn v. Minton, 568 U.S. 251 (2013), the court concluded that the underlying patent law issues were not substantial enough to warrant Federal jurisdiction.

. . . Although the adjudication of Plaintiffs’ claims may require the court to determine whether Defendants used a feed-manufacturing process that infringed on Plaintiffs’ patented process, there is little to suggest that the state court’s analysis of this issue will affect uniformity in patent law.  Indeed, the embedded patent issues in this case are fact-bound and situation-specific and will have no precedential effect on federal courts or federal patent law generally. Nor do Plaintiffs’ claims raise novel patent issues. To the extent they raise patent issues, they are ones of basic infringement.