This is a follow-up post from a recent discussion of assignee-applicants. About 40% of recently filed patent applications are filed without listing any particular assignee in the patent document. One comment queried what percentage of those cases are actually assigned. To start on an answer to that question, I pulled up data on patents issued over the past 10 years and identified the percentage of patents that issue with no assignee designated at the time of patent issuance. The chart below shows that this percentage is now well under 10%.

One aspect of the America Invents Act of 2011 was to allow patent owners to directly file patent applications as the named “applicant.” Under the prior rule, only inventors could be applicants except in unusual circumstances where the inventor was proven to be unavailable or unwilling to cooperate with the rights-holder. This change simplifies the process for corporate patent owners — especially in dealing with continuation applications and former employees. The chart above shows information gleaned from recently published patent applications and shows that most assignees are now naming themselves as the applicant rather than the inventors.

Where Will the Patent Satellite Offices Open!

Feigelson has created an interesting graph of Jepson Claims. 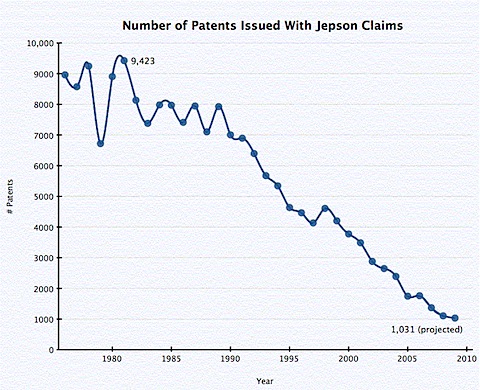