Yesterday, the negotiating parties (which include the United States) released the final draft of the Anti-Counterfeiting Trade Agreement (ACTA), a document that purports to combat the proliferation of pirated and counterfeit goods.  The development of this Agreement has been subject to considerable controversy, in large part due to the secretive nature of its negotiation, which took place outside conventional International IP bodies such as TRIPS and WIPO.  The Electronic Frontier Foundation, for example, has written extensively about the subject, as has Michael Geist.

In its final state, ACTA relates primarily to copyright and trademark infringement, and expressly disclaims application to patent law in several sections.  Nevertheless, everyone interested in intellectual property law issues should give it a read (and at only 24 pages long it's a surprisingly concise document), as within the area of trademark and copyright infringement the scope of ACTA is very broad: despite its characterization as a "Trade Agreement," it covers the enforcement of IP rights in the domestic civil, criminal, and digital spheres in addition to providing for border control measures,

Although ACTA generally tracks existing U.S. law on copyright and trademark infringement, the Agreement has a clear pro-rights holder slant.  For instance, provisions on discovery discuss only the rights of the party asserting the infringement claim, and do not require similar rights on the part of the alleged infringer.  Readers may also want to pay particular attention to the criminal provisions – which seem on their surface to make any commercial willful trademark or copyright infringement subject to criminal penalties.

Given that this document likely will be scrutinized by scholars and practitioners concerned about the implications of strong copyright and digital property rights, I'll identify just a few specific drafting issues that leaped out at me.

The full text of the proposed version of ACTA is available here:  Download Finalized ACTA text.  In addition to substantive issues, some organizations have raised concerns about the potential approval of ACTA via Executive Agreement, as opposed to ratification by the Senate.  If the former approach is indeed used, it will likely have profound legal implications that courts, practitioners and scholars will need to address.

Update: As one commenter pointed out, Terry Hart's blog Copyhype has a detailed point-by-point comparison of many ACTA provisions to the relevant U.S. law.  Mr. Hart also responds to some of the negotiation transparency criticisms that various organizations have raised. 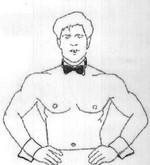 The first Chippendales club opened in Los Angeles in 1978. The following year, on-stage performers began wearing their now well-known Cuffs & Collar costumes. In 2003, the USPTO agreed that the trade-dress had acquired distinctiveness and issued Trademark Registration No. 2,694,613. (Chippendales had argued that the mark was also inherently distinctive, but the examiner had rejected that argument.) In 2008, the original mark became “incontestable.”

This case arose in 2005 when Chippendales requested a new registratation for the same mark based upon its inherent distinctiveness. (The company wanted to strengthen its mark.) The Tradmark Trial and Appeal Board ruled against Chippendales — finding that the mark was not inherently distinctive.  In particular, the Board noted that strippers often wear revealing would-be professional costumes such as a stethoscope, utility belt, or chaps with a ten-gallon hat.  In this case, the Chippendales Cuffs & Collar costume appears directly derived from a Playboy Bunny costume.  Based on these facts, the Board held that the Chippendales outfit failed the test for inherently distinctive trade dress outlined in Seabrook (CCPA 1977).

On appeal, the Federal Circuit first looked to determine whether the costume is part of the product design or only product packaging.  That distinction is legally important because of the Supreme Court ruling in Wal-Mart v. Samara Bros (2000) that product design is never inherently distinctive.  Here, the court held that the costume is product packaging — with the product being “adult entertainment services.”

The Appellate Court then walked through each of the three relevant Seabrook elements:

Here, the Appellate Court rejected the Board’s implicit holding that no costume on an adult entertainer could be inherently distinctive.  However, the Appellate Court agreed with the Board that the Cuffs & Collar costume was a “mere refinement” of the well-known Playboy Bunny costume.  As a result, the Cuffs & Collar costume failed the third Seabrook element and therefore lacks inherent distinctiveness.

In its brief, Chippendales argues that Wal-Mart v. Samara is at odds with Seabrook and that the Seabrook should therefore be revisited. The Federal Circuit rejected that suggestion.

Carl Oppedahl lost his case to register the mark “patents.com.”  However, that setback did not dissuade him from continuing to push against trademark law limitations.

Recently, the USPTO issued a trademark registration certificate for his “sensory mark.” The mark consists of a sixteen-second musical introduction that Oppedahl uses for his recorded lectures on patent law practice.

During the trademark prosecution, the USPTO examining attorney initially suggested that "due to the length of the proposed mark, consumers may consider the sound to be a mere entertaining prelude to the sound recording, more suitable as a copyrightable work than as a trademarkable source indicator."  Oppedahl responded by pointing-out that the PTO had registered the THX sound recording [THX.MP3] which is apparently 25–seconds in length as registered.  I recently (and unsuccessfully) attempted to use a similar argument when pulled-over for speeding.  Apparently, I have no right to speed just because others speed without getting caught.

The USPTO has registered a number of sound marks, including the NBC chimes in 1972.  Harley Davidson eventually withdrew its application to register a mark on the sound made by the roar of its V-Twin engine.

I have posted a new draft-article to SSRN entitled A Trademark Justification for Design Patent Rights. The article is currently in the editing process and will hopefully be published later this year in the Harvard Journal of Law & Technology.

The Abstract: In a series of cases spanning more than one hundred years, courts and the US patent office have made clear that design patents are not to be justified by a fact that the newly invented ornamental design aids in distinguishing a company's product from those of its competitors. This article reverses that conclusion and argues instead that the trademark-like distinctiveness function that helps eliminate customer confusion is the most compelling policy justification for the continued protection of design patent rights in the US.  In cursory language, a number of courts have suggested that the foundation of design patents policy follows the same incentive-to-create approach of copyright and utility patent law. I tentatively reject this traditional incentive model as unlikely to be important in most situations involving ornamental designs.  Rather, I suggest the better justification for design patent doctrine lies in the notion that design patent rights serve as an alternative rule of evidence for trade dress protection.  However, design patents are not merely a parallel alternative to trade dress.  Rather, the existence of practical differences between the doctrines means that design patents rights are available in situations where trade dress protection is unavailable or uncertain.