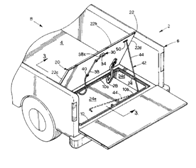 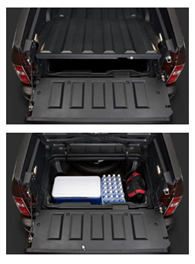 “This is a patent infringement case pertaining to wall-mounted telephones designed for use by prison inmates.”  Both the accused device and the patents focus on a telephone system that operates without the dangers of a phone cord. However, the TIP patents require a “handset” mounted in the wall of the phone box with a mouthpiece that “extends through” the wall.  These claims are exemplified in the figures.

Questionable claims of infringement are naturally resolved by a Markman hearing and subsequent summary judgment of noninfringement. Here, the district court found (i) that the claimed handset must include a handle with both an ear-piece and mouthpiece and (ii) that the mouthpiece must pass through an aperture in the front wall of the phone box.  It was clear that the accused device did not exhibit either of these features and thus could not infringe.

The definition of the handset was made easy because the claims stated that: “a telephone handset being a handle with an ear-piece at one end and a mouthpiece at an opposite end.” The exact definition is support from the figures is also provided in the specification.

The CAFC affirmed on claim construction then went on to consider whether the elements may still be covered under the doctrine of equivalents (DOE).

If an element is not literally covered by a claim, the device may still be considered infringing if the accused element is equivalent to the claimed element. Thus, to infringe a patent, each claim element or its equivalent must be found in an accused device.

The game in the doctrine of equivalents is defining an ‘element.’  The patentee wants a broad definition (the telephones as a whole are very similar) while the defendant argues for a narrow definition. Here, the defendants won when the courts found that a “handle” is an element of the claim.  Since the accused devices have no structure that is similar to a handle, they cannot infringe even as an equivalent.

In March, 2007, the Central District of California dismissed Comfort Strapp’s complaint on summary judgment — finding no proof of infringement.  Comfort Strapp’s patent relates to a comfortable shoulder strap for luggage.

Doctrine of Equivalents: Accused products that exhibit only ‘insubstantial differences’ from the claimed patent may also be considered infringing under the doctrine of equivalents. (DOE). However, the DOE cannot apply where it would vitiate a claim limitation.

Here, the Federal Circuit panel agreed that as a matter of law, the doctrine of equivalents does not allow a claimed two-material strap to encompass a strap made of only one material. According to the appellate panel, such a reading would be “the fundamental opposite of the claimed invention.” Citing Freedman Seating.

Vitiation and the Doctrine of Equivalents: The asserted patent claims a target concentration of 1.6 ± 0.4 × 10-4 µmol/mm3. Based on that claim language, the district court ruled that the claim was “intended to establish the demarcation of boundaries [with] the type of precision that is closely analogous to the metes and bounds of a deed of real property.”  Thus, according to the court, allowing the claim to cover any concentration outside of the clearly claimed limits would vitiate the limitation.

On appeal, the CAFC rejected the notion that an expanded numerical range would vitiate the claim language.

“A reasonable juror could make a finding that a quantity of halogen outside that range is insubstantially different from a quantity within that range without “ignore[ing] a material limitation” of the patent claim.”

This decision conforms to prior decisions that allow equivalents for numerical ranges, but not for other limits (such as a claimed “majority.” Moore).

Notice of Infringement: 35 U.S.C. § 287(a) provides that damages for patent infringement only begin to accrue once the infringer was “notified of the infringement.” (Marking constitutes constructive notice). Notice requires a charge of infringement directed to a specific product, device, or action. The notice must also normally include the patentee’s identity. Here, the infringement letter (sent by “Mr. Rolfes”) did not specifically indicate that Philips was the assignee, but the court found notice sufficient because (1) Philips was correctly listed as the assignee of the patent and (2) Philips had granted the sending party the “responsibility for licensing and enforcing” the patent. Thus, Philips may collect damages from the date of receipt of the letter.

Ortho’s patent covers a pain-relief combo of tramadol and acetaminophen with a ratio of “about 1:5.” Caraco’s drug has a ratio of 1:8.67.  The lower court construed the claims and found no infringement.

The court reasoned that the term must have a narrow meaning in this patent because a broad meaning would leave other claimed ratios meaningless. The court also noted that the literal meaning of the term should be narrowly construed because Ortho “could have easily claimed a [broader] range of ratios”

An expert testified that the statistical range should be 1:3.6 to 1:7.1 based on a confidence interval constructed from the data in the patent, and the Federal Circuit agreed. (The patent discussed the importance of 95% CI).

Literal Infringement: The Federal Circuit found that there could be no literal infringement because the upper claimed bound for the ratio was 1:7.1 while Caraco’s ratio was 1:8.67.

Doctrine of Equivalents: No DOE because Ortho cancelled claims with broader range during reissue. Interestingly, the Court made this ruling based on vitiation rather than prosecution history estoppel:

[I]t cancelled the broader “comprising” claims, except for claim 6. In sum, having so distinctly claimed the “about 1:5” ratio, Ortho cannot now argue that the parameter is broad enough to encompass, through the doctrine of equivalents, ratios outside of the confidence intervals expressly identified in the patent. We agree with the district court that to do so would eviscerate the limitation.