In yesterday's post, I wrote that the USPTO had granted more utility patents in 2010 than in any other year in history – 31% more than in 2009. The ramp-up is not due to increased hiring of examiners. (The USPTO was in the midst of a hiring freeze for much of 2010). Likewise, the ramp-up is not explained by increased patent application filings. (Although there has been a small increase in filings, the large backlog buffers the output rate from input fluctuations). I suspect that the ramp-up is largely due to changes implemented by USPTO director David Kappos and Patent Commissioner Robert Stoll after the departure of former PTO Director John Dudas and Interim Director John Doll. The former regime focused on the PTO's role of denying "bad" patents from issuance. The new regime has modified that approach and instead looks to issue right-sized patents.

Although 2010 saw more issued patents than ever before in-history, the chart below provides some evidence that the rise in patent grants is not an historical anomaly. The chart shows the number of patents issued per examiner over the course of the past decade. The chart suggests that the 2010 rise is more of a return to the grant rates of the first-half of the past decade. The anomaly – at least from this perspective – is the 2007-2009 period where the grant rate dropped so precipitously. 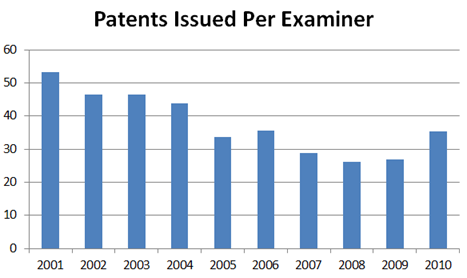