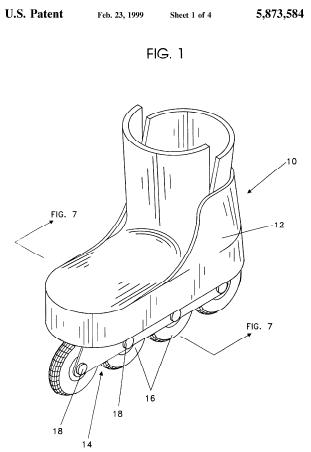 In its March 15 decision, the Federal Circuit affirmed a district court’s grant of summary judgment of non-infringement of the claims of three patents relating to in-line skate technology.  The patents were directed to a particular frame design for attaching the wheels to the boot.  To provide flexibility in frame and wheel adjustment of a skate, the frame included two sidewalls “releasably attached” by a plurality of fasteners to toe and heel plates of the skate.   (For example, see U.S. Patent No. 5,873,584).

The dispute centered on whether rivets could serve as fasteners that “releasably attach.”  The embodiments set forth in the patents-in-suit utilized screws as the releasably attaching fasteners.  The district court had construed the term “releasably attaching” to mean that the fasteners “must permit the sidewalls to be easily removed and replaced” and determined that one skilled in the art would not consider rivets to fall under that definition.  In reaching that conclusion, the district court looked to the specification of the patents-in-suit, as well as the specification of a patent (the “Meibock patent”) cited on the face of one of the patents-in-suit.  Finally, the district court supported its construction by referring to an uncontrolling decision of the Federal Circuit that interestingly addressed the unremovable nature of rivets in in-line skates:  “Screws, unlike rivets and laminates, are meant to be unscrewed, that is, to be removed.  A rivet or a laminate, to the contrary, is meant to remain permanent, unremovable unless one is bent on breaking the permanent structure apart.”

Finally, the Federal Circuit approved of the district court’s reference to its earlier uncontrolling decision addressing the removability of rivets, since the district court had merely used it to supports its independent conclusion in this case.

Marcus Thymian is a partner at McDonnell Boehnen Hulbert & Berghoff LLP in Chicago. Mr. Thymian is experienced in planning, creating, enforcing, and defending against patent portfolios, and has logged many miles on in-line skates over the past 20 years. [link to bio]