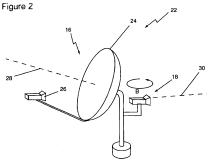 Northpoint owns patents covering a method of communication through geosynchronous DBS satellites and sued MDS for infringement.  A jury found infringement, but also concluded that the claims were invalid.  The court then denied motions for JMOL & a new trial.

Dissenting in part, Judge Dyk argued that the majority’s claim construction was “plainly incorrect.”  Using an internal analysis of claim language and the “object of the invention,” Judge Dyke found that the disputed term should have been much more narrowly construed.