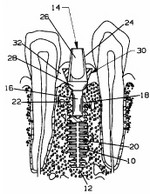 The Federal Circuit’s decision in Bicon appears to mark a further narrowing in the scope and availability of the doctrine of equivalents (DOE), particularly for patents where the claim recites physical structures.  Significantly, the court’s doctrine of equivalents discussion makes no mention of the familiar tests for DOE coverage, i.e., the function/way/result test of the Graver Tank decision, or the “insubstantial differences” test of Hilton Davis Chemical Co. v. Warner-Jenkinson Co., 62 F.3d 1512 (Fed. Cir. 1995), rev’d & remanded, 520 U.S. 17 (1997).   Rather, the Court invoked a new exclusion principle essentially foreclosing coverage under the Doctrine in cases where a claim contains a detailed recitation of structure, stating that such a claim is accorded “limited recourse to the doctrine of equivalents.”   Slip op. at 17.     For support of this rule, the court cites cases purportedly standing for “an exclusion rule” that denies any coverage under the doctrine for subject matter where such subject matter is “inconsistent with the language of the claim.”  Slip op. at 17-18, citing Sci-Med Life Sys. Inc. v. Advanced Cardiovascular Sys., 242 F.3d 1337 (Fed. Cir. 2001); Ethicon Endo-Surgery Inc. v. Surgical Corp., 149 F.3d 1309 (Fed. Cir. 1998), and other cases.

The problem is that, by definition, a claim term that is expanded under the DOE is, in some fashion, “inconsistent” with the literal scope of the claim.   Bicon suggests that such inconsistencies are resolved by barring application of the DOE.  Bicon is difficult to reconcile with prior precedent upholding findings of infringement under the DOE, decisions which by definition accommodate inconsistency between the claims and the accused device.

The particular invention at issue in Bicon pertained to a dental implant.   The court was examining language in the claim preamble, which, in a separate portion of the opinion, was found to be an affirmative limitation of the claim.   The claim at issue, claim 5 of U.S. Patent 5,791,731, recited:

5.         An emergence cuff member for use in preserving the interdermal papilla during the procedure of placing an abutment on a root member implanted in the alveolar bone of a patient in which

[a] the abutment has a frusto-spherical basal surface portion and

[b] a conical surface portion having a selected height extending therefrom comprising . . . [body of claim].

The accused device had a trumpet-shaped, concave surface, which was argued to be equivalent to the convex frusto-spherical basal surface of part [a] of the preamble.     In rejecting the patentee’s equivalency argument, the court stated:

The problem that [the patentee] faces in this regard is that limitation [a] and [b] of the claim contain a detailed recitation of the shape of the abutment, including that it has a frusto-spherical basal portion.  A claim that contains a detailed recitation of structure is properly accorded limited recourse under the doctrine of equivalents. See Tanabe Seiyaku Co. v. Int’l Trade Comm’n, 109 F.3d 726 732 (Fed. Cir. 1997)(“The sharply restricted nature of the claims has much to do with the scope we accord to the doctrine of equivalents.”). That principle has special application in a case such as this one, where the claim recites a particular shape for the basal portion of the abutment that clearly excludes distinctly different and even opposite shapes.  In such cases, we have explained, “by defining the claim in a way that clearly excluded certain subject matter, the patent implicitly disclaimed the subject matter that was excluded and thereby barred the patentee from asserting infringement under the doctrine of equivalents.”   Sci-Med Life Sys. Inc. v. Advanced Cardiovascular Sys., 242 F.3d 1337, 1346 (Fed. Cir. 2001) [further citations omitted]; Ethicon Endo-Surgery, Inc. v. U.S. Surgical Corp., 149 F.3d 1309, 1317 (Fed. Cir. 1998)(subject matter is “specifically excluded” from coverage under the doctrine of equivalents if its inclusion is “inconsistent with the language of the claim.”)

Both of the structures in the Straumann system that are possible candidates for equivalence to the abutment base recited in the claim fall victim to this principle of specific exclusion.  As we have noted, the basal portion of the Straumann abutment is frusto-conical, not frusto-spherical, and the neck of the Straumann root member is concave, not convex.  These shapes are clearly contrary to, and thus excluded by, the patentee’s characterization of its abutment as having a convex, frusto-spherical shape.

There are several things of note in this analysis.  Significantly, the Federal Circuit does not engage in any function/way/result analysis under Graver Tank, or any examination of whether the differences in geometry between the accused device and the claimed invention are insubstantial under Hilton-Davis.    Rather, the Federal Circuit seems to be excluding availability of the doctrine of equivalences completely, based solely on a textual analysis of the claim itself and noting that the accused product is not within the literal scope of the patent.

The decision raises the question of whether the bar on availability of the doctrine of equivalents, based on the “specific exclusion principle”, is a question of law that might be amenable to summary judgment.  If so, it would avoid the factual disputes associated with a function/way/result or insubstantial differences analysis.   It is at least arguable that this “specific exclusion principle” is one of law and amenable to summary judgment.

The rule of exclusion based on a textual analysis of a claim brings to the fore the tension in the doctrine between the two opposing principles of 1) allowing some additional claim scope beyond the literal bounds of the claim in an appropriate case under the Doctrine, while (2) preserving the public notice function of claims.  The decision in Bicon lands squarely on the side of the upholding the latter principle at the expense of the former.   It doing so, it is consistent the trend of the Federal Circuit cutting back on the scope of the DOE.  Creative litigants will surely apply the Bicon exclusion principle to other areas besides the mechanical arts.   Virtually any claim is amenable to a “specific exclusion principle” argument.

If the Federal Circuit’s specific exclusion doctrine is interpreted as meaning that a selection of a particular claim term operates as a matter of law as a disclaimer of coverage under the doctrine for subject matter not within the literal definition of that term, then the death knell for the doctrine has basically been rung.