No joke — A Christmas present that actually works. I visited my sister’s house recently noticed that they are still regularly using the gift that I gave to them last Christmas!  It is a simple device that receives a radio-signal from ACCUWeather and provides a 5–day forecast. A partner at MBHB initially recommended it to me. 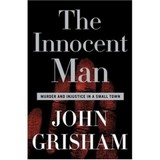 Those who know me will realize that I purchased the RadioShack version.

What to get for me? How about the newest Grisham? The Innocent Man: Murder and Injustice in a Small Town

4 thoughts on “The Best Christmas Present”